Even if you have more than two million dollars to spare, you can't get one as they're all sold out.

We've seen the Ferrari Daytona SP3 from every possible angle in official images and videos, but only in the traditional red shade. During the Finali Mondiali event last weekend, the Prancing Horse brought a white example of its retro-flavored V12 hypercar, nestled between its predecessors – the Monza SP1 and Monza SP2 speedster.

The most aerodynamic Ferrari road car that doesn't use active aero can also be driven without a roof like the other two models from the Icona series. However, it is easier to live with the Daytona SP3 since it boasts a removable targa top for those rainy days. There's no Internet consensus regarding its design as some find it absolutely gorgeous while others believe the styling is not cohesive in the sense that it takes cues from various models and mixes them all together.

YouTube star Tim Burton (aka Shmee150) got up close and personal with the satin white example, which also had a different interior by adopting a red theme as opposed to the blue cabin shown by Ferrari in the press photos. Another difference between the two cars is the application of dual stripes onto the hood, extending all the way to the back.

It is worth noting the Daytona SP3 has a modern interpretation of pop-up headlights, which have long been retired due to stringent pedestrian protection regulations. See those flaps above the exposed headlights? They're officially known as "upper mobile panels" per Ferrari terminology and they slide up to reveal more lights when you drive off.

The horizontal blades at the back are just as striking as they are on the red car, perhaps even more so due to the dark gray background of the carbon fiber panel. With good reason, the rear end has generated the most controversy, and we'd be interested in seeing the Daytona SP3 with an all-black finish where the full-width lines would be less visible.

We've also attached a video containing footage shot at Mugello Circuit during the Finali Mondiali where the Daytona SP3 was taken out for a spin for the first time. It was joined on track by the car that inspired it, a gorgeous 330 P3/4 from the 1960s. The race car is likely even more valuable than its modern-day interpretation, even though the targa-topped hypercar cost $2.26 million.

Rekindle With Its Predecessors: 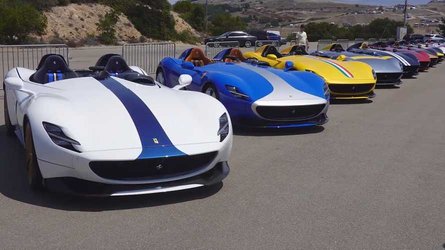 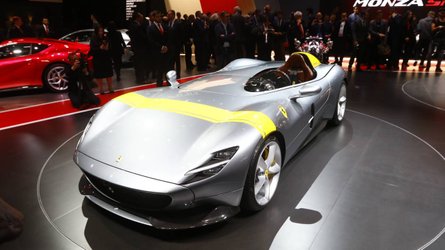 The latest Icona model is less exclusive than the Monza duo as Ferrari is planning to make 599 examples of the Daytona SP3 or an extra 100 compared to the combined production of the speedsters. Despite the exorbitant price tag and longer production run, all of them have already been sold.

Interestingly, 499 of them have been acquired by existing Monza SP1 and SP2 owners while the remaining 100 units were grabbed by a "select" group of Ferrari clients, according to the company's marketing and sales boss Enrico Galliera. All had been sold before the official debut on Saturday.