There are many other mods aside from the third axle and bed.

Note: Hit the CC button in case the English captions are not automatically turned on.

After showing off a wild Lexus LX convertible built for falconry, the folks at ArabGT are back with another unconventional build. Coincidentally, it's based on the LX's more mainstream sibling, the Toyota Land Cruiser. We're dealing with a previous-generation LC200 with extensive modifications as it's no longer an SUV. Transformed into a pickup truck, the one-off build boasts a third axle and represents the work of just one man – Hussein Al Tamimi.

Born in Iraq, Hussein has quite a lot of experience in heavily customizing cars and this latest build will be followed by another project with a Japanese donor vehicle. In the meantime, he visited Dubai and spoke to ArabGT about his wild LC ute, but bear in mind the footage of the truck was filmed in the city of Basra, Iraq.

It's not an authentic 6x6 vehicle since the extra axle is not attached to the drivetrain as the additional wheels just tag along with the standard 4x4 setup. Hussein shaved off the corners of the front bumper to improve the truck's approach angle. It's got all the off-road goodies, including a winch, a pair of tow hooks, extra LED lights, and a chunky skid plate.

The LC200 pickup also gained a snorkel as well as fender flares at both the front and rear, along with a custom suspension setup for higher ground clearance. Even the taillights were modified and now feature an all-LED setup with sequential turn signals and do a little "dance" as seen in luxury cars when you lock/unlock the vehicle.

Here Are Some True 6x6 LCs: 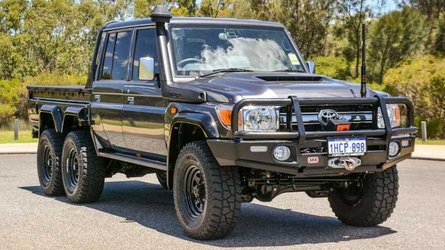 Rule The Off-Road With This 6x6 Toyota Land Cruiser Conversion
⠀ 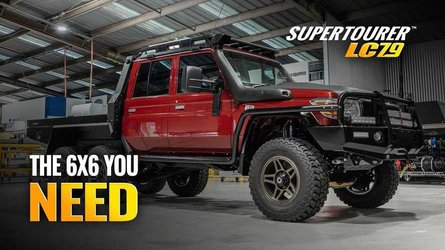 Step inside by using the electrically deployable running boards and the changes continue with red leather just about everywhere, including both front and rear central armrests and the Rolls-Royce-esque "Starlight" headliner. Much like a Porsche Taycan, there's a screen mounted in the dashboard on the front passenger side, along with a pair of displays for the rear-seat entertainment system.

It even has soft-close doors and tailgate (with illuminated "Land Cruiser" lettering), not to mention a custom center console for the rear seats with a built-in display. Hussein modified the steering wheel to accommodate a small screen in the middle, flanked by lights for the 5.7-liter V8's rpms in the same vein as a race car.

It must've been quite expensive and time-consuming to turn the Land Cruiser into a pickup truck with a more luxurious interior bringing it close to its Lexus LX twin. It's certainly a unique build, and while it's not a veritable six-wheel-drive machine, we applaud Hussein's efforts to create one of the most interesting LC200-based builds ever.