Say what you will about how it looks, but the sedan is certainly original.

The ongoing Guangzhou Auto Show is chock-full of China-only cars, some more interesting than others. Among the new debuts, the second-generation Mistra caught our attention with its unusual exterior design that borrows a thing or two from other models. We’re specifically talking about the peculiar split headlight design adapted from the Creta subcompact crossover, while the taillights look like a flipped version of the Sonata's rear lights.

Shown here is the fully electric version with its closed-off grille and the charging port hiding below the Hyundai logo at the front. The midsize sedan is slightly smaller than the aforementioned Sonata and has a 56.5-kWh battery pack feeding an electric motor that pushes out 181 horsepower (135 kilowatts) and 310 Newton-meters (229 pound-feet) of torque.

While the quoted maximum range of 323 miles (520 kilometers) is decent, it’s worth pointing out the Chinese testing cycle is based on NEDC, which is notoriously known for being overly optimistic. It takes 40 minutes to charge the battery from 30 to 80 percent, while a full recharge takes an agonizingly long nine and a half hours. 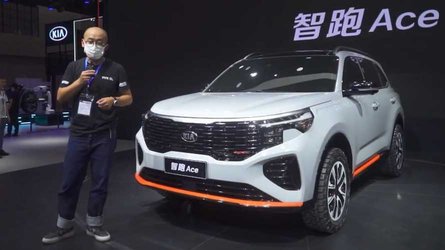 2021 Kia Sportage Ace Is Not The New Global Sportage

As far as the interior is concerned, the dashboard seems to have more in common with the smaller Elantra rather than the Sonata. There’s loads of legroom in the back by the looks of it, although the driver’s seat seems positioned quite close to the steering wheel. The center console does away with most conventional controls by switching to touch-sensitive buttons. That’s why the center stack looks like one piece of black plastic in this video, because the car is turned off and the buttons are not active.

The 2021 Mistra is a product of Beijing Hyundai, a joint venture established back in 2002 in China between BAIC Motor and Hyundai. Other cars sold by the company include the ix25, ix35, Tucson, Encino (Kona), Santa Fe, Sonata, Celesta, and others.