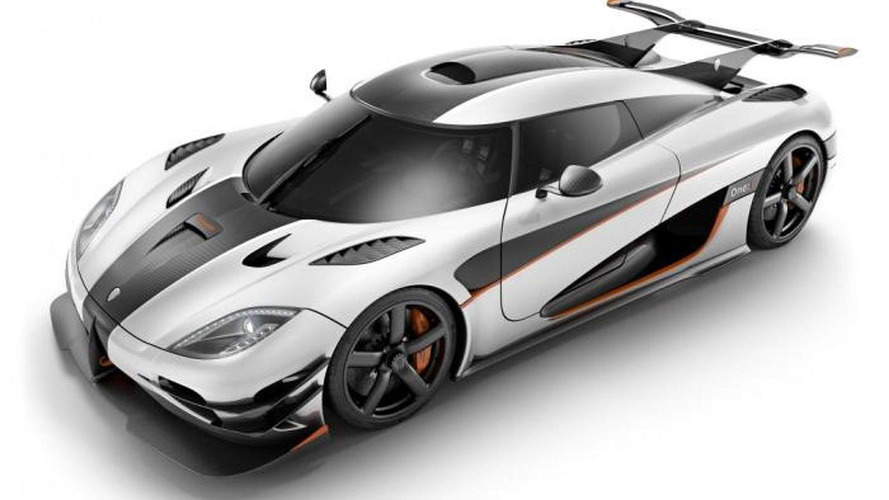 Koenigsegg has fully revealed the highly anticipated One:1 which is set to become the world's fastest production car.

Koenigsegg has fully revealed the highly anticipated One:1 which is set to become the world's fastest production car.

Power is transferred to the wheels via a dual-clutch 7-speed gearbox and an electronic differential which enables the model to perform the 0-248.5 mph (0-400 km/h) run in about 20 seconds while stopping from that speed takes around 10 seconds. It needs only 28 meters to come to a full stop from 62 mph (100 km/h).

The braking system has been carried over from the Agera R so the One:1 packs 397mm front power-assisted ventilated ceramic discs with six-piston calipers while at the back it has ventilated ceramic discs measuring 380mm with four-piston calipers. Koenigsegg has updated the rear triplex suspension with active shock absorbers and carbon bevel springs.

The One:1 sits on 19-inch front / 20-inch carbon fiber wheels covered in custom Michelin Cup Tires which have a speed rating of 273 mph (440 km/h). The engine is compatible not only with normal gasoline, but also with E85 biofuel as well as race fuel, while the weight of the car is distributed 44 percent front / 56 percent rear, just like in the Agera R.

Set to be showcased at the 84th Geneva Motor Show, the Koenigsegg One:1 will be built in a limited series of six units and all cars have already been sold.