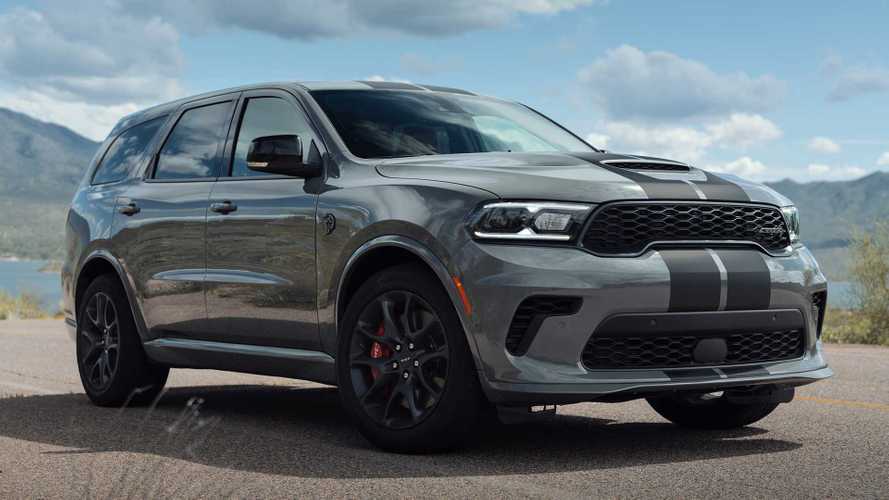 The rest of the Durango lineup sees some changes too, including an 8,700-pound towing rating.

Although many of us thought the 2021 Dodge Durango would be all-new, instead we get a facelifted version of the sporty SUV. That’s not terrible, given the model’s inherent goodness, and what’s more, Dodge is finally giving the family-sized Durango the Hellcat treatment, creating the world’s most powerful SUV in the process. The 2021 Dodge Durango SRT Hellcat will produce a heart-pounding 710 horsepower (529 kilowatts) and 645 pound-feet (875 newton-meters) when it arrives at dealers early next year.

You knew it would happen eventually. With the arrival of the Durango Hellcat – and the departure of the uninspiring Grand Caravan and Journey – every single 2021 Dodge model now offers a high-performance SRT variant. The Durango’s transformation is more than just an engine transplant, though. As with the Jeep Grand Cherokee Trackhawk, the supercharged Dodge needed a significant amount of body work and muscle building to tame the beastly mill.

As such, the Durango Hellcat sprints to 60 miles per hour in just 3.5 seconds, on its way to a top speed of 180 mph. The quarter-mile passes by in 11.5 seconds. And if that extra-legal performance isn’t enough, the big Dodge does normal family-SUV things too, with an 8,700-pound towing capacity that might even humble the larger, more trucklike 2021 Cadillac Escalade.

Like other SRT Hellcat models, the Durango’s V8 gets a variety of strengthening measures, including a forged steel crankshaft, pistons, and connecting rods, as well as piston-cooling oil jets and block-cooling water jackets. A pair of variable-pressure fuel pumps, a supercharger-feeding cold air scoop in the lower body, and a free-flowing dual exhaust with a crossover X-pipe (the largest in the Hellcat family) ensure proper engine operation in both low- and high-load conditions.

Keeping that kinetic energy in check is the job of an eight-speed automatic transmission, the same as the one found in the Trackhawk. All-wheel drive is standard, keeping all four Pirelli Scorpion Zero all-season tires turning (Pirelli P-Zero summer tires are available, too).

The suspension, based on that of the 2020 Durango SRT, has been revised to offer both greater comfort and handling, thanks to a 20 percent increase in total rebound control depending on the selected drive mode. Dodge also claims reduced understeer and body roll, improving responsiveness when faced with a corner. (Of note, the non-supercharged Durango SRT will get some of the same suspension changes for 2021, though we still expect the Hellcat to handle a bit better than its still-capable sibling.)

The 2021 Dodge Durango Hellcat hit the gym and the tailor, by the looks of its spiffy new duds. Along with the rest of the 2021 Durango lineup, it receives a new front fascia design with a grille inspired by that of the Charger four-door sedan. Slimmer headlamps recall the Ram Heavy Duty in our eyes, a styling element likewise shared with more plebeian members of the SUV family. “Racetrack” LED rear lighting again appears on the 2021 Durango Hellcat.

Unlike other Durangos, the Hellcat does without foglights, using those openings in the front bumper to provide the engine with greater cooling, while a two-piece front splitter reduces lift at speed. Around back, a reshaped rear spoiler actually provides downforce – 400 pounds at 180 mph. 20x10-inch wheels with a Hellcat-specific design come standard, although the available Black Package includes different rollers of the same size.

Inside, every 2021 Durango gets a revised and restyled interior, with a larger console, redesigned center stack, and more traditionally shaped gear shifter. A 10.1-inch touchscreen display is the largest in its class – powered by FCA’s next-generation Uconnect 5 infotainment system – and the SRT Hellcat also gets the Performance Pages app, which allows for greater customization of the gearbox, suspension, steering, and engine response. Both the SRT 392 and the SRT Hellcat get a flat-bottomed steering wheel with integrated shift paddles, featuring a red backlit SRT logo on the center spoke. Red-trimmed gauges join standard ventilated Nappa leather seats with suede accents and an embroidered Hellcat logo – posh Laguna leather upholstery with an embossed logo is optional.

The Rest Of The Story

The entire 2021 Dodge Durango lineup sees a few changes. Properly equipped, the Durango R/T – powered by a 5.7-liter Hemi V8 – can now pull 8,700 pounds worth of trailer. Enabling such high ratings is the work of the silly-named Tow N Go package. So equipped, the 2021 Durango can tow 1,300 pounds more than its 2020 equivalent – equal to the much larger Lincoln Navigator even. Tow N Go includes cosmetic frippery like SRT-inspired bumpers, fender flares, and 20-inch wheels, as well as functional upgrades like Brembo brakes with six-piston front and two-piston rear calipers, clamping down on 15.0-inch vented and slotted front rotors and 13.8-inch vented rear rotors. An SRT adaptive damping suspension and limited-slip differential are also included.

For 2021, gone is the formerly signature crosshairs grille, replaced once and for all with a notched-trapezoid opening that recalls the Charger sedan. That’s right, alongside the departure of the Grand Caravan and Journey, Dodge is also officially retiring the quadrilateral grille that has been a staple of the company’s products for decades. We think the new grille works well on models like the R/T and SRT Hellcat, but it’s a bit too aggressive for the formerly graceful and handsome Durango Citadel.

Bookending the front grille are headlights that appear slimmer, with a delicate LED light signature that looks very slick. The front bumper has been reshaped and resized – again, the aggressive and large front fascia works well on the R/T and SRT, but on the Citadel, it looks a bit Leno-esque. Around back, a new rear bumper joins what look like a carryover hatch and taillights – Dodge’s distinctive “racetrack” LED remains, so we won’t complain.

Inside, the alterations are far more substantial. A modernized dashboard with an accent-stitched knee panel improves the Durango’s dated appearance quite nicely. For 2021, even the base Durango SXT comes standard with an 8.4-inch Uconnect display, quite an impressive stat for an entry-level midsize SUV. However, Citadel, R/T, and SRT models come standard with a tied-for-best-in-class 10.1-inch touchscreen also found in the Hellcat, oriented horizontally on the dashboard and running a much faster Uconnect 5 operating system.

However, all is not right in the Durango, with a few areas that could stand some improvement. Dodge didn’t make any official announcements regarding standard safety features, but the company’s official announcement about the 2021 Durango mentioned forward collision warning and prevention, lane departure prevention, and blind spot monitoring only when discussing the Citadel trim level. Given other automakers’ focus on democratizing safety, we think that means the 2021 Durango will still require owners to tick a box and fork over some cash to get certain driver-assist and collision prevention features.

We hope that’s not the case, because in most other respects, the already poised Durango sees a raft of useful improvements for 2021. With a solid, granitic structure and aggressive proportions, the unibody Durango continues to serve as a sort of anti-crossover, offering excellent on-road performance without sacrificing bona fide work credentials or visual attitude.

Order books for the 2021 Dodge Durango open soon, with dealer deliveries beginning in the fall. Pricing should fall within a few hundred bones of the current Durango’s $30,795 starting price.

The 2021 Dodge Durango SRT Hellcat hasn’t been priced quite yet, but thanks to the Jeep Grand Cherokee SRT and Trackhawk brethren, we can estimate that it’ll cost about $20,000 more than the “standard” Durango SRT. That would put its price at about $83,000, using the 2020 Durango SRT as a jumping-off point.

Perhaps more relevant will be the Durango Hellcat’s rarity and the effect it might have on resale values. Available only for the 2021 model year and boasting such power, quarter-mile, top speed, and towing superlatives, the Hellcat might be an investment-grade family SUV, holding its value in the future as it enters the used-car market. Another single-year special, the Challenger Hellcat–based 2018 Dodge SRT Demon, is trading for quite a bit more than its original $84,995 suggested price, particularly for low-mileage examples. Might the Durango Hellcat enjoy the same fate?