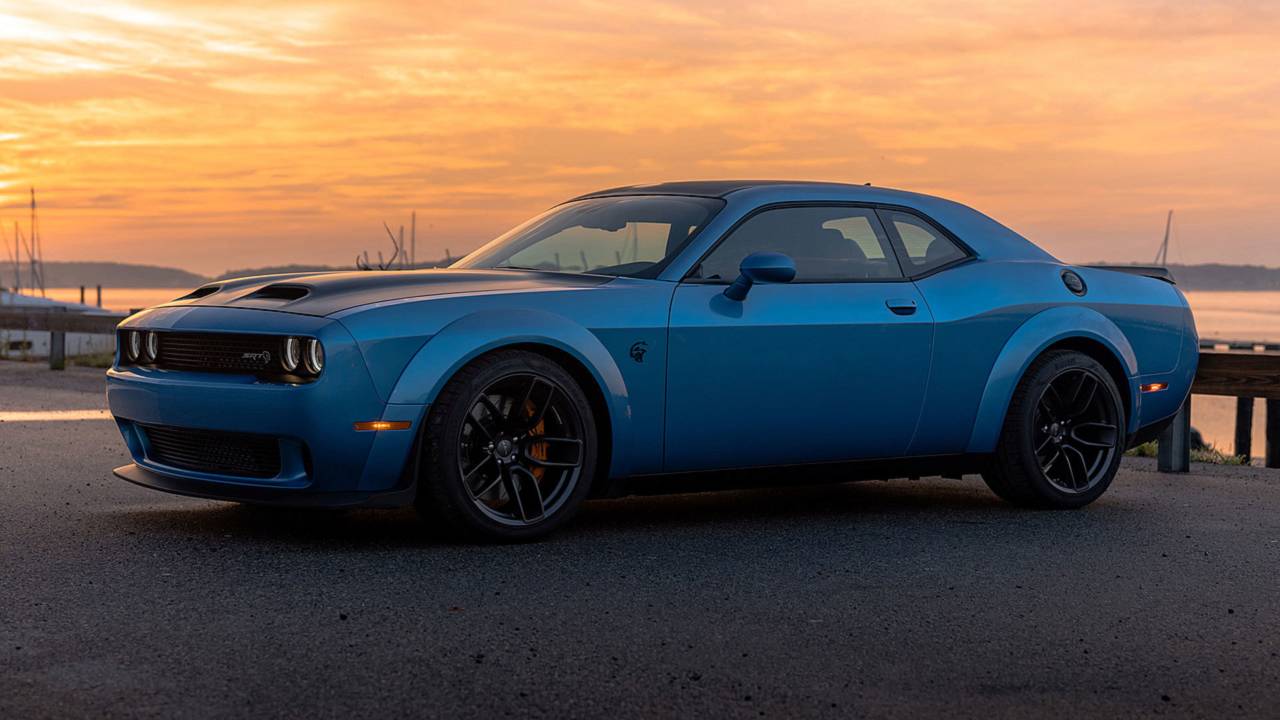 On October 30th, 1961, the USSR tested RDS-220 on Novaya Zemlya, a chain of islands off the northern coast of Russia. Nicknamed the Tsar Bomba by Westerners, the nuclear device had a yield of roughly 50 megatons of TNT, literally thousands of times more powerful than the atomic weapons used near the end of WWII.

The Tsar Bomba was also known by another name: Kuzma's Mother. It was a reference to Nikita Khrushchev's promise a year prior at a session of United Nations General Assembly to "show the United States a Kuzma's mother," an idiom that roughly translates to "We'll show you.”

When the 707-horsepower Dodge Challenger SRT Hellcat was announced back in 2014, it raised the bar for engine output in production muscle cars – all of a sudden, 600 horsepower seemed almost pedestrian. The car was an immediate sensation with critics and enthusiasts alike, and the usual suspects from around the industry scrambled to form their own responses. While convincing arguments can be made about power-to-weight ratios, grip, and other factors that contribute to a vehicle’s overall dynamic capability, that lofty output number resonated far more effectively than any pared-down engineering dissertation could.

The sales numbers backed this up – Dodge literally couldn’t build Hellcats fast enough that first year. The Challenger lineup continues to buck industry trends today, with year-over-year sales on the rise even as consumers continue to move from coupes and sedans to high-riding crossovers in droves.

But after a few years, 707 horsepower somehow started to seem normal in the realm of attainable high performance. Chevrolet announced the 755-horsepower Corvette ZR1, and Dodge’s own road-legal dragster, the 2018 Challenger SRT Hellcat Demon, boasted 840 horsepower when fed a steady supply of race fuel.

But with the Demon’s singular focus, substantially higher price tag, and limited production numbers, it felt like something of an outlier – a one-off experiment rather than a new high-water mark for muscle cars. To keep the hounds at bay, Dodge needed to re-write the rules of engagement yet again. They needed a new Tsar Bomba for the horsepower wars, and they’ve delivered it in the form of the 2019 Challenger SRT Hellcat Redeye.

Curious onlookers would be forgiven for mistaking the Redeye as “just” a Hellcat – aesthetically there isn’t a whole lot that sets the new model apart from the rest of the supercharged Challenger lineup. Much like the Hellcat before it, the Redeye relies on what’s underneath the skin to make a lasting impression.

“As it has been common to do over the past 50 years or so in the muscle car world, we took the biggest engine we had available to us and we mated it with the best car we had available to put it in,” explained Kevin Hellman, Dodge’s brand manager for the Challenger while introducing us to the Redeye at the Brick South warehouse in Portland, Maine. “So this is the marriage of the Demon powertrain to the Hellcat.”

While the latest iteration of Dodge’s 6.2-liter V8 shares a common architecture and displacement with the rest of the supercharged Hemis, it boasts an output of 797 horsepower and 707 pound-feet of torque due in part to its 2.7-liter twin-screw blower, a bump in size versus the 2.4-liter unit used with the standard Hellcat models and Jeep Grand Cherokee Trackhawk.

But that’s actually down a few ponies from the Demon’s 808 hp output on pump gas, a concession that Dodge attributes to a slightly altered engine calibration as a result of the new dual snorkel hood design. As SRT engineers explain it, the Redeye’s 203 mph top speed required a hood less prone to create high-speed lift than the Demon’s did – a model which tops out at 168 mph due to its drag radial tires. But that resulted in a more restrictive intake design, and a slight drop in power in turn. While I don’t doubt that this new hood is more aerodynamic, it’s hard not to wonder if that output rating has more to do with the potential bruising to Demon owners’ egos rather than air intake capacity.

But 797 horsepower is still plenty, as I soon discovered. Setting out for the Club Motorsports race track in Tamworth, New Hampshire – a 70-mile drive from Brick South – gave me some time to see how well behaved an 800-horsepower muscle car can be out on public roadways. The answer, ultimately, has more to do with the restraint of one’s right foot than it does the supercharged Hemi rumbling just in front of it. An instinctive stab of the throttle before I even put the car into gear, and the child-like giggles it elicited, set the tone for the day.

That gear, by the way, will be “D” on every Redeye that Dodge builds. While the rest of the V8 Challenger lineup is available with an optional six-speed manual transmission (including the standard Hellcat), the Redeye is an automatic-only affair. As the owner of a six-speed Challenger Hellcat myself, I found that to be a bit of a bummer, but not wholly surprising. When my car arrived at the dealership last year after the factory had built it to my specification, the salesman told me it was the first manual Hellcat he’d ever seen.

The Redeye is an automatic-only affair.

Still, if you’re going to be saddled with a slushbox, the TorqueFlite 8HP90 eight-speed is one of the best out there. The ZF-sourced transmission is a clever piece that’s well-suited to the task, offering quick response and near-instant shifts when driven in anger, and relaxed, unfussy behavior around town.

And if I’m honest, 707 horsepower is a bit of a handful with three pedals – which is part of the fun – but adding nearly a hundred ponies to the equation might be pushing it. Even with the automatic managing the proceedings and Widebody grip on hand, generating tire-incinerating wheelspin only requires a deliberate stomp on the skinny pedal at any speed under 70 mph.

That doesn’t mean the Redeye is an unruly beast, though. With a host of adjustable settings for steering weight, transmission behavior, suspension stiffness, and other driving attributes, the Redeye can be a fantastic grand tourer or an urgent, flat-cornering performance machine literally at the push of a button.

The latter half of that split personality was showcased once I arrived at Club Motorsports. Carved into the side of a mountain, this visually stunning road course looks like the sort of racetrack a Bond villain would own. The 2.5-mile, 15-turn course is more than 40 feet wide and features 250 feet of elevation change, allowing the Redeye to play to its strengths.

Compared to pony cars like the Ford Mustang and Chevrolet Camaro, the sedan-based platform that underpins the Challenger is physically huge, and its center of gravity is relatively high. But SRT continues to prove that good engineering can go a long way, even on an 800-hp muscle car that weighs well over two tons.

SRT continues to prove that good engineering can go a long way.

Despite a weight distribution of roughly 57/43 front to back, the Redeye is surprisingly neutral when commanded properly. Like any high-horsepower, rear-wheel-drive machine, the back end will step out on you if you’re impatient with the throttle on corner exit, and the front will push if you ask more of it than the tires can physically offer when you dive-bomb into a corner. But this burly coupe can dance with the right partner, provided you’re willing to steer with the throttle when needed and accept the fact that it isn’t a Porsche Cayman.

Despite the copious girth and horsepower, I never felt any obvious intervention from the traction and stability control systems,which the right-seat instructors kept on while we lapped the cars under their supervision, even as I started to really throw the Redeye around in search of its dynamic limits. The car won’t be easy on consumables if you’re a track day regular, but if you’re like me, it’s worth the price of admission just to get the side-eye from other drivers in your run group. If you ditch the wide Pirelli PZeros for some R-compound rubber, you might just break a few well-heeled hearts.

Speaking of deep pockets, would-be Redeye owners better have them. Although the base 2019 Challenger SRT Hellcat is about $5,000 cheaper than the 2018 model, Dodge has accomplished this by making a number of formerly standard features optional, like leather, ventilated seats, and premium audio. A base, standard-fender Redeye starts at $69,950 (not including the destination charge), while the Widebody package commands an additional $6,000.

One well equipped tester I drove was $85,810 all-in (with gas guzzler tax and destination), and another example that was completely dressed to the nines rang up over $91K. That’s a far cry from the starting-under-$60,000 machine that debuted just four years ago. There is indeed more power and more grip, and in the case of those test cars, more content and customization as well. Yet I can’t help but wonder if Dodge is starting to stray from a simple formula that proved so successful – supercar performance on a blue collar budget.

War is expensive – horsepower-related or otherwise. Then again, firepower sure does solve a lot of problems.