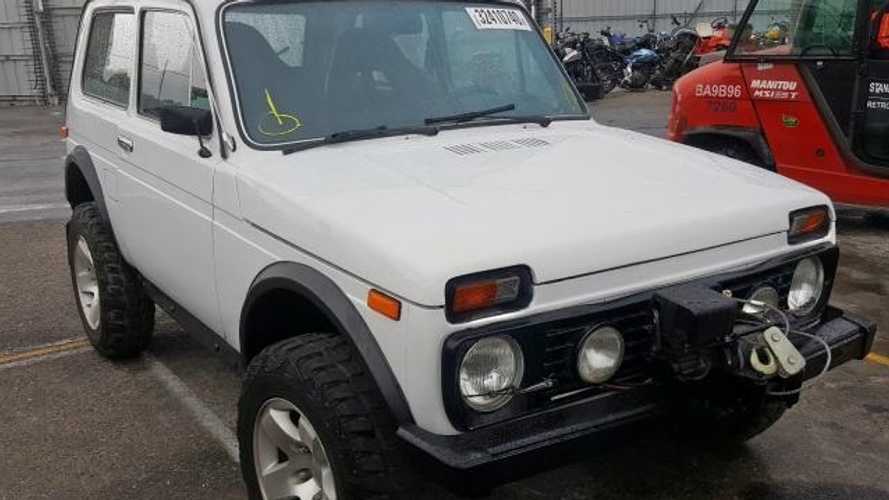 The Lada Niva got updated a few months ago with a few minor visual revisions plus a more comfortable and practical cabin. Under the hood, there’s still a 1.7-liter naturally aspirated gasoline engine with 83 of the finest Russian horsepower (62 kilowatts). Unfortunately, there’s no one currently officially importing new Ladas into North America but that doesn't mean you can't buy a used Niva.

Copart currently has a 1981 Niva for sale and the auction is ending in approximately 36 hours from now. It’s a very good-looking white example with aftermarket off-road wheels and a winch on the front bumper. The black plastic wheel arches also seem to be an upgrade from the stock appearance but everything else is in factory condition.

While the listing says that the little off-roader has covered 10,958 miles (17,635 kilometers), we are pretty sure the odometer shows the same number but it’s actually displaying kilometers rather than miles. Lada exported the Niva to Canada for several years in the 1980s and, while we can’t confirm it at this point, this particular example looks to be a Canada-spec model. Another reason why we believe this reading is in kilometers is that the speedometer scale shows 180 as top speed and there’s no chance a Niva would hit anything close to 180 miles per hour (290 kilometers per hour).

The Niva Is Still Alive:

Considering the low mileage, it’s not a surprise that the interior looks to be in an absolutely fantastic condition and the engine bay is clean and rust-free. It’s important to note that this example is from the early Niva models, which means it is powered by a 1.6-liter naturally aspirated engine with 76 hp (56 kW) and 93 lb-ft (126 Nm). The unit is mated to a four-speed manual gearbox and a full-time four-wheel drive with three differentials.