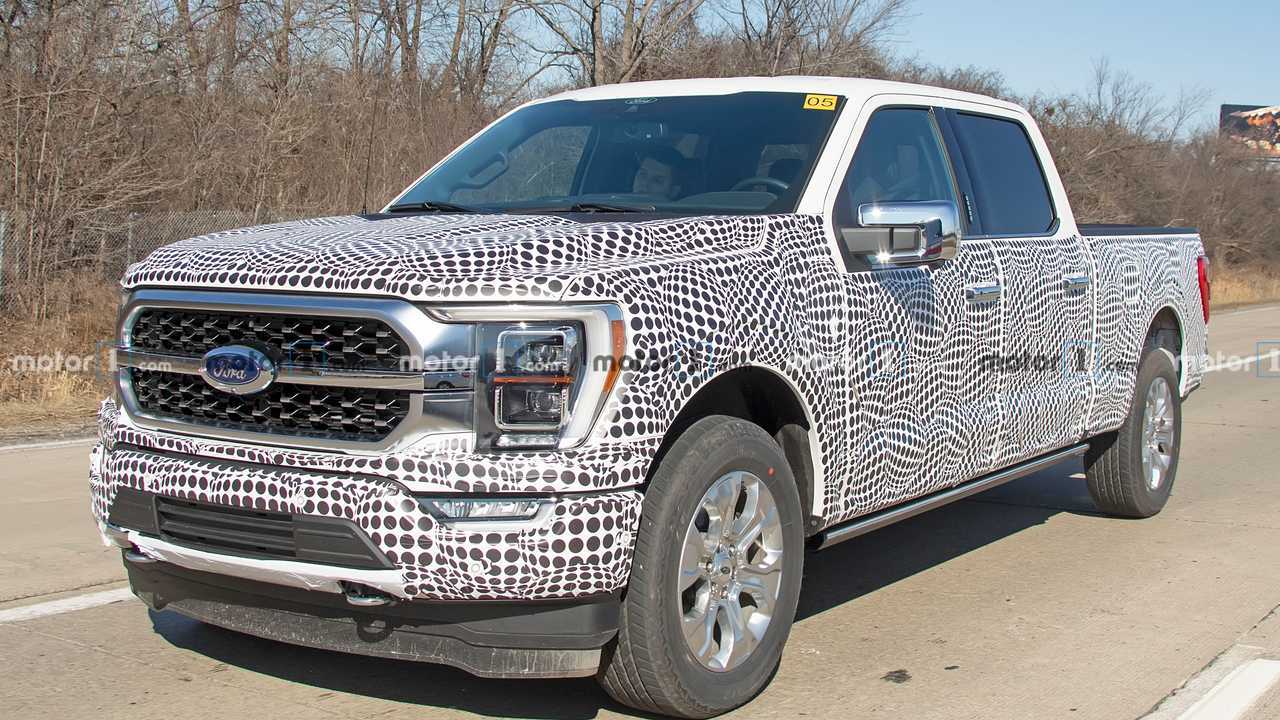 It's a striking evolutionary update from the current model.

Here's a big surprise. New spy shots out of southeast Michigan catch this 2021 Ford F-150 prototype looking production-ready with absolutely nothing covering its new look in front. There isn't a stitch of camouflage hiding the grille or headlights, and we're treated to a very close look. For that matter, the rest of the truck is only wearing a minimal camo wrap, but the jaw-dropping news here is obviously the F-150's revealed face.

Clearly there's some Ranger influence in the grille, and the stacked headlights with an angled housing are reminiscent of the GMC Sierra. Ford hasn't taken the same gargantuan grille approach as its crosstown rival, choosing instead to follow Ram with a design that's smooth but still aggressive. Our initial impression is favorable, though we're certainly interested in seeing the entire truck without a camouflage wrap.

Speaking of the rest of the truck, our spy sources say there are no false panels to be seen under the wrap, so aside from the eye-distorting nature of the coverings, what you see is what you get. Ford's side-kink for the front doors is obviously retained on the new model, not to mention the external keypad. It's still very much a slab-sided rig with nothing of prominence around the wheel wells, and the tailgate for this particular model looks pretty basic.

As surprising as this sighting is, the bigger news is arguably the forthcoming all-electric F-150. It's expected to hit showrooms late in 2021, and of course, Ford dropped its infamous teaser of an electric F-150 test mule strutting its torque by towing a train. Whether we'll get news on the fully electric model when the new F-150 debuts later this year is unknown.

As for that debut, we haven't heard anything official. Unofficially, we have a credible tip that says pilot production for 2021 trucks is already underway at Ford's F-150 plant in Dearborn, with regular production expected to begin in August. That means an official debut could happen at the New York Auto Show in April, at the Detroit Auto Show in June, or anytime between now and then with a special standalone event.