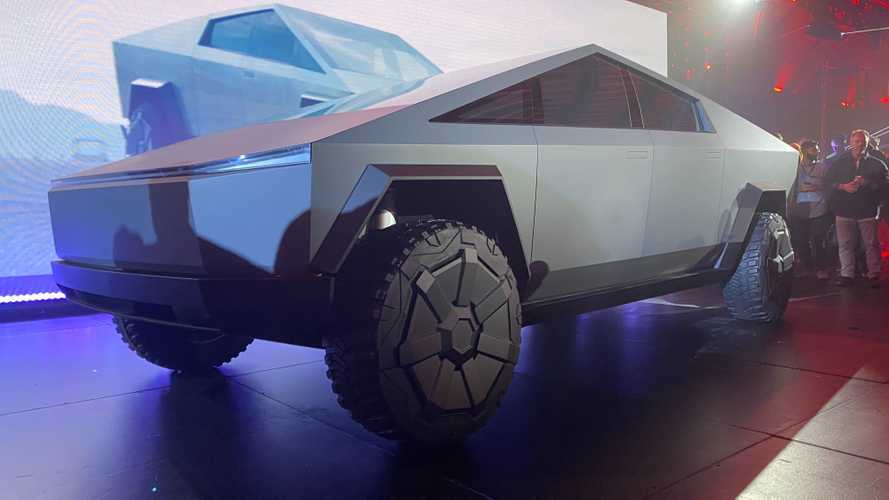 Surrounded by iconic vehicles from Hollywood's Sci-Fi history such as Blade Runner and Back to the Future, Tesla unveiled its interpretation of a sci-fi-themed electric pickup this evening in Southern California, and it's called the Cybertruck. There's something very different about this machine versus all those others, however. This isn't science fiction – it's fact.

There's absolutely no mistaking this truck for anything else on the road. Its body is comprised of a steel alloy that Musk says is dent-resistant, scratch-resistant, and, per a demo onsite at the reveal, sledgehammer-proof as well. In fact, he also says the Cybertruck is bulletproof to 9mm shells. The metal used is said to be the same as the metal used to skin the SpaceX Starship prototype that's going through construction and testing. What's also interesting is that the exposed metal body panels are actually a structural part of the truck. It's unibody in the truest sense of the word, in that the body is the frame. The glass is also said to be extremely strong, though not quite as strong as Musk apparently hoped since the Cybertruck's glass did shatter rather spectacularly on stage. That's obviously not planned, but hey, welcome to a Tesla vehicle debut.

To be fair, Musk shared a video of what should've happened during window strength demonstration, and that's with the windows completely intact even after throwing a steel ball on it. Here's the off-stage trial video that Musk tweeted:

So yeah, the body is super strong, but what about vehicle stats? Musk tossed some serious numbers out for the bonkers pickup, not the least of which being capable of 0-60 mph in just 2.9 seconds for the highest-performance all-wheel-drive model. That machine will also turn a quarter-mile in 10.8 seconds, and it's said to "corner like it's on rails." In its most efficient trim (Tesla will offer three versions), it can exceed 500 miles on a single charge, with base models achieving over 250 miles of range and solar charging adding 15 miles of range each day. Furthermore, a report from Motor Trend suggests the "Plaid" ultra-high performance upgrade could produce as much as 800 horsepower and 1,000 pound-feet of torque. Official power figures for the Cybertruck haven't been released yet, but such motivation doesn't seem out-of-place considering the sub-three-second 0-60 time for something that will obviously weigh a lot.

Musk: Solar-Charging Cybertruck To Add 15 Miles Of Range Per Day

At first glance, cornering on rails might seem rather impossible, but the Cybertruck rides on an adaptive air suspension setup that can give the truck as much as 16 inches of ground clearance. The suspension can also lower on the fly for on-road use, and it can employ a load mode to hunker down just at the rear, allowing for toys like Tesla's nifty ATV (which also made a surprise debut at the event) much easier to stow-and-go.

So okay, it sounds pretty shocking performance-wise, and it certainly looks crazy, but can it perform as an actual truck? The Cybertruck comes with an industry-standard 6.5-foot pickup bed and a 3,500-pound cargo capacity, and it's available with either a single-motor / rear-wheel-drive setup, a dual-motor / all-wheel-drive setup, or a tri-motor / all-wheel-drive arrangement. For off-roading, it features a 35-degree approach angle, 28-degree departure angle, and it can tow up to 14,000 pounds. And since this is an EV truck with an air suspension, electric outlets and air lines for power tools are literally built into the package.

Crazy wedge body notwithstanding, the stats all sound pretty darned good, but then you get to price. The Cybertruck will start at $39,900 for a single-motor RWD model with 250-plus miles of range and a 0-60 time of 6.5 seconds. That's not bad, however, the insane tri-motor flagship model starts at only $69,900. Mind you, that's for a truck with hypercar acceleration, a 14,000-pound tow rating, and an electric range of over 500 miles. Given a choice between this or a fully-loaded F-150 for the same price, which would you pick?

If your answer is none of the above, Tesla could introduce a smaller version of the pickup at some point in the future. Nothing is confirmed, but when presented with the idea, Elon Musk took to twitter do basically say anything is possible.

Yeah, the windows might break if you throw metal balls at them, and the body really does look like something from Blade Runner, but it's hard to deny the shock value and sheer capability proposed by this machine. Musk says preorders are being taken now, and in fact, 200,000 preorders have already been placed with deliveries of the entry-level model expected to begin in late 2021. Accessories are also expected to be sold alongside the Cybertruck, include a "Camp Mode" previewed in one of Tesla's officially released images that shows a bed-mounted tent and hide-away kitchen.