It's not a good day to open the roof.

The Aston Martin Vantage Volante is getting ready to open its roof, but the top stays closed in these spy shots that catch the car driving on a foggy day. As the doors and hood proclaim the production version of this roadster arrives in spring 2020.

There isn't any camouflage on this Vantage Volante. The styling largely identical to the coupe, except for the fabric roof and revised rear deck. When the top is open, there's a transparent panel between the seats that acts as a wind deflector when in place. Other than this tiny change, the cabin should be identical to the hardtop model. 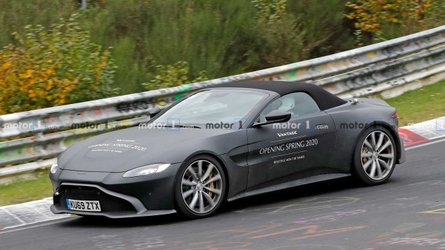 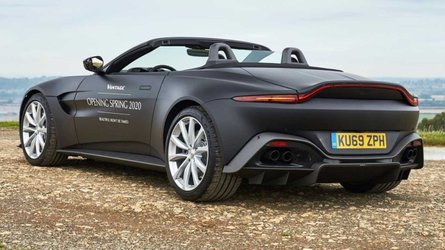 Aston says the Vantage Volante packs the Mercedes-AMG-sourced 4.0-liter twin-turbo V8 making 503 horsepower (375 kilowatts) and 505 pound-feet (685 Newton-meters) of torque that runs through an eight-speed automatic. The roof mechanism and body stiffening will likely add some weight to the coupe's 3,373-pound (1,530-kilogram) weight. This will likely mean a few ticks more than hardtop's 3.5 seconds to reach 60 miles per hour (96 kilometers per hour).

It's not yet clear whether Aston intends to offer an AMR version of the Volante. If it follows the coupe version, the driver-focused model would get a seven-speed manual with a dog-leg first gear. The weight falls by 209 pounds (95 kilograms) on the hardtop thanks in part to carbon-ceramic brakes, and there are adaptive dampers with Sport, Sport +, and Track modes.

Don't get your hopes up for a V12-powered version of the Vantage Volante. Chief Creative Officer Marek Reichman previously said that he thought the bigger mill would be "too much" for the car.

Look for the Vantage Volante to sell for a premium over the $149,995 coupe. However, the figure should be quite a bit less than the $216,495 DB11 Volante to keep space between them in the lineup.