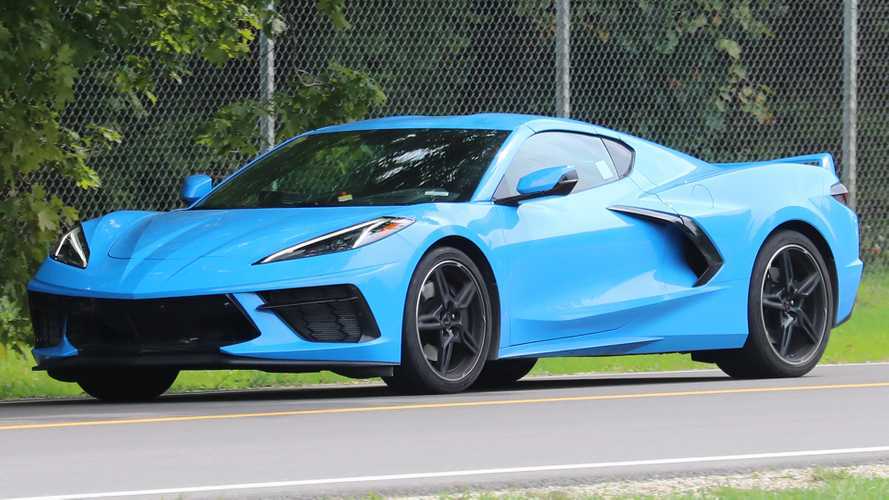 While they aren't available at showrooms yet, Chevy no longer needs to camouflage pre-production 2020 Corvette C8 test mules when they're on the road. These new spy shots catch a Rapid Blue 'Vette cruising near General Motors' Milford Proving Grounds.

The 2020 Corvette is available in 12 colors, and Rapid Blue is one of the most eye-catching of the dozen to our eyes, although gets a little too close to the color of a Smurf. It and the similarly vibrant Accelerate Yellow Metallic add $500 to the price of a C8.

Corvette buyers also have a choice of Elkhart Lake Blue, and you can see the difference between the shades using Motor1.com's slider tool below. Rapid Blue is a significantly brighter color but doesn't seem to highlight the C8's lines quite as well as Elkhart Lake Blue.

This 'Vette also has styling elements from the Z51 package, including the more aggressive body kit. Other test mules (like the one on the right, above) with this option have special emblems on the brake calipers, but the branding is absent on the one in the new photos. The differences are likely because these are still pre-production vehicles.

This comparison also highlights the C8 Corvette's removable roof panel. It means that any buyer can enjoy a form of open-roofed driving. If buyers want to feel even more wind in their hair, the 'Vette Convertible debuts on October 2 and should be on sale a few months after the premiere.

Could 2020 C8 Corvette Production Be Delayed By The UAW Strike?
⠀

Production of the C8 Corvette reportedly starts in early December. However, there's a possibility that the date could change because of the UAW strike affecting General Motors. Depending on how things progress, the new 'Vette might arrive in showrooms later than expected.