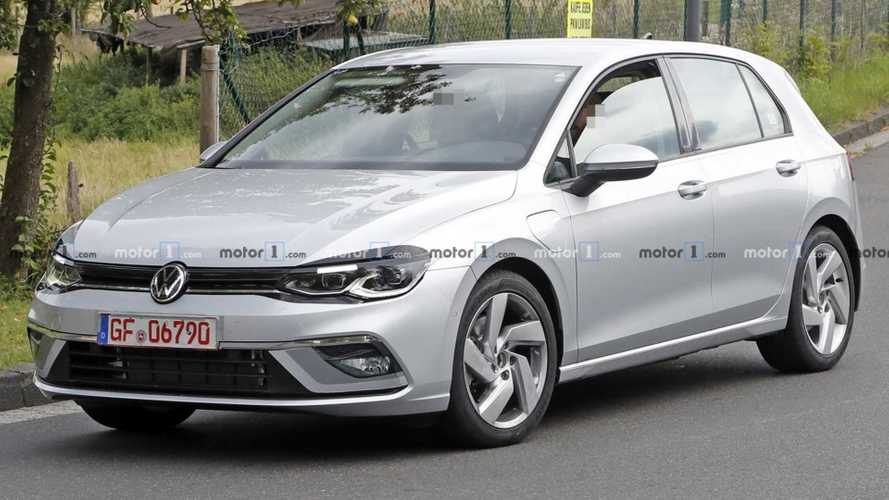 By far our best look at the next-generation Golf, complete with the new VW logo.

It was only a few hours ago when we shared an official rendering of the new VW Golf as seen on the ID.3’s infotainment system and now we have something much better. Caught with most of the camouflage gone, the GTE version was seen flaunting the company’s updated corporate logo that debuted on the ID.3 earlier this week. The near-production prototype is also showing the extra cap for the charging port, now sitting on the front fender rather than underneath the VW badge in the front grille.

You might be tempted to say the car has no disguise whatsoever, but there are still some stickers on the headlights and taillights in the same vein as the ones Porsche slapped onto the Taycan before revealing the sporty EV. The front bumper has a similar type of camo around the fog light area, while the rear one contains body-colored tape on the pair of fake exhaust tips.

VW didn’t even bother to hide the car’s interior, which is obviously a sign the Golf’s premiere is right around the corner. Indeed, the car’s debut has already been confirmed to take place sometime in October, and perhaps the electrified GTE will be revealed right away seeing as how this prototype has very little camo.

Some of the badging is missing from this prototype, like the VW logos on the wheels and the center-mounted “Golf” lettering on the tailgate. There’s also no sign of the blue “GTE” badges on the front fenders, but overall, this is probably 99% the car you’re going to find at a European VW dealer near you. The side parking sensors suggest we’re dealing with a high-end version equipped with the Park Assist system, while the headlights appear to be of the full-LED variety.

Thanks to a previous spy photo and an official VW teaser, we also have a pretty good understanding of what to expect from the Golf’s interior. Vastly different than its predecessor, the Mk 8 will get rid of most physical buttons and knobs to integrate many of functions into the new infotainment system. Beneath the display on the center console will be a touch slider, presumably to control the temperature settings.

A minor bump in size corroborated with an updated MQB platform could free up more space inside the cabin and in the cargo area. Even so, it won’t be the most practical compact car from the VW Group as that role was attributed to the modern Skoda Octavia ever since its inception back in 1996. The Golf’s Czech cousin is also right around the corner, with Skoda announcing the debut will take place before the year’s end.