Electrification is still a priority at Porsche, but traditional sports cars remain important, too.

Porsche's GT division is responsible for models like the Porsche 911 GT3, GT3 RS, GT2 RS, and 718 Cayman GT4 (pictured above). The team there doesn't intend to electrify the variants that it produces, according to department boss Andreas Preuninger while speaking to Autocar.

"There are ideas to maybe look in that direction for the normal sports car line but not for the GT cars," Preuninger told Autocar. "If we would decide to make all the racing cars electrified overnight, then we would have a reason to look into that but, as always, it has to be a connection between the cars we use on the track to the cars we sell with a number plate attached."

According to Preuninger, members of the Porsche Board still understand the importance that the GT division's hardcore models have for the brand, even as the company develops more hybrids and fully electric models. All three types of vehicles form major pillars for the company's product plan, he suggests.

The Latest Projects From The GT Division: 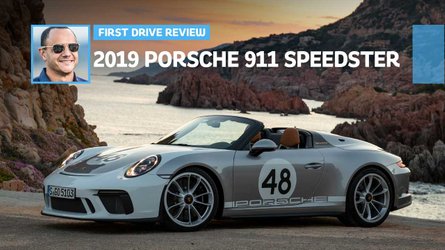 The GT division has been very busy in the last few months with the introduction of the 911 Speedster, 718 Cayman GT4, and 718 Boxster Spyder. Based on spy shots, the next-gen 911 GT3 has already started development, too.

Porsche's electrification initiative really kicks off in September when the production Taycan makes an official debut. The EV should be in European showrooms before the end of the year. Americans need to wait until mid-2020 when the model would be on sale for the 2021 model year. Later, the Taycan Sport Turismo wagon would join the range as a more utilitarian option.