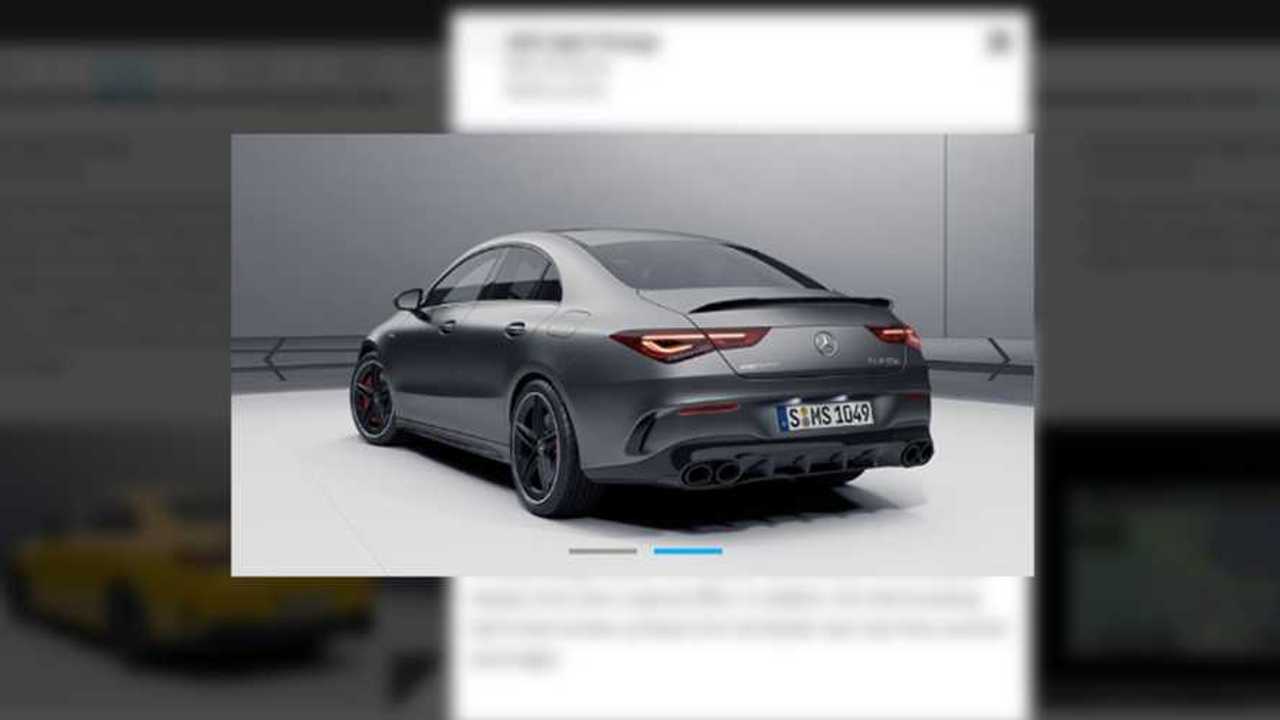 That probably wasn't supposed to happen.

Mercedes-Benz just pulled the covers off its sexy AMG-tweaked CLA 35 Coupe at the 2019 New York Auto Show. The posh compact four-door wears some sporting touches and gets a power boost to 302 horsepower (225 kilowatts) from its 2.0-liter turbocharged four-cylinder. We know an even stronger CLA 45 is inbound, and it seems even Mercedes is excited to see this car revealed. That's because the above image leaked straight from the automaker’s German website.

Auto Bild cracked the story with some help from an astute reader. It’s a bit complicated, but if you load up the configurator for the CLA 35 and scroll down to the AMG Night Package, you’ll see a photo of a yellow CLA 35 showing its backside. Click the lower-case i on the bottom right of the photo and you’ll get a pop-up box that offers a second photo, and it sure looks like the higher-spec CLA 45. We have the photo zoomed in below to give you a better look.

Appearance wise there isn’t much difference between this and the CLA 35, but the quad exhaust outlets are definitely something we’ve only seen on camouflaged CLA 45 prototypes. We can’t quite make out the lettering on the right side of the decklid, but our eyes tend to see a 4 where there should be a 3. Furthermore, this could be the further-enhanced S model, as there’s definitely another letter after the digits.

From what our spy teams have told us, the Mercedes-AMG CLA 45 S could have a significantly more potent tune for its boosted 2.0-liter four-pot, generating an impressive 416 hp (310 kW) that would also go to all four wheels. The standard CLA 45 is expected to produce 383 hp (286 kW), but either trim should offer a tail happy drift mode to make things exciting.

Despite this leak, we don’t expect to see the CLA 45 very soon. With its baby brother having only been unveiled in April, the CLA 45 is likely still many months away. In the meantime, don’t be surprised if this leaked photo gets changed on Merc’s website tout suite.