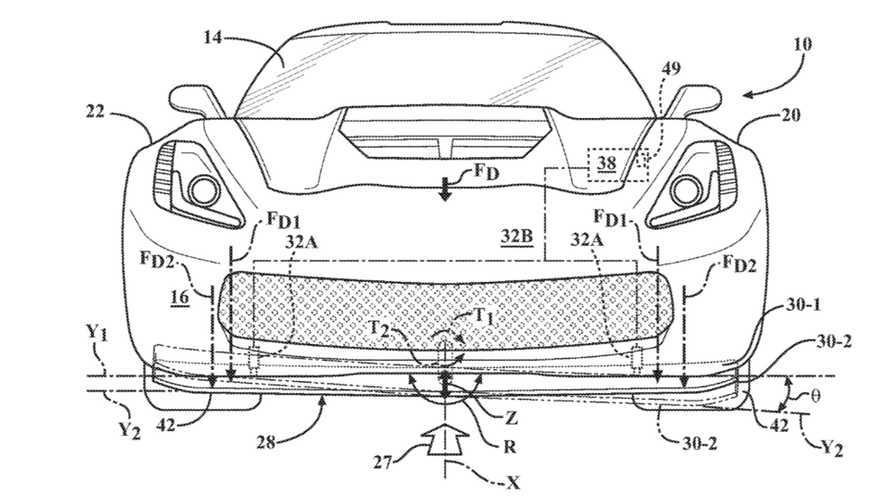 The splitter would be able to move, twist, and tilt to tweak the airflow at the front end.

General Motors filed a patent for an active front splitter, and the automaker used a Chevrolet Corvette to illustrate the system. The images could be a hint of the system being available on the upcoming mid-engined 'Vette. The folks at the Mid-Engine Corvette Forum first spotted the application.

A vehicle with this tech would have a traditional front splitter attached to the vehicle and a second movable splitter. Electric motors would control the adjustable one. Plus, an array of sensors and software would determine how to move it.

The adjustable splitter would be able to rotate, tilt, and move up and down. Each of these alterations would be able to make different tweaks to the airflow running underneath the vehicle. The most obvious function is increasing downforce to suck the front end into the road. Similarly, the tech could counter the effect of lift at high speeds.

Plus, the ability to tilt lets the adjustable splitter vary the airflow from side to side so that this system can also affect a vehicle's handling.

As with any patent, there's no guarantee that this tech could go into production. However, General Motors clearly has an interest in active aerodynamics because the company is filing multiple patents for various implementations of the system. One of them was quite similar to this latest idea by offering an idea for a front splitter, hood louvers, rear wing, and diffuser that could extend.

There was also an idea for flaps on each side of the front fenders and on the hood. These pieces would mostly benefit cornering by creating a pressure differential to put a force on the vehicle's body.

Another bunch of patents concerned active air ducts, movable side skirts, and rear wing capable of moving and tilting.