Ford And Chevy Dealers Duke It Out In Billboard Battle 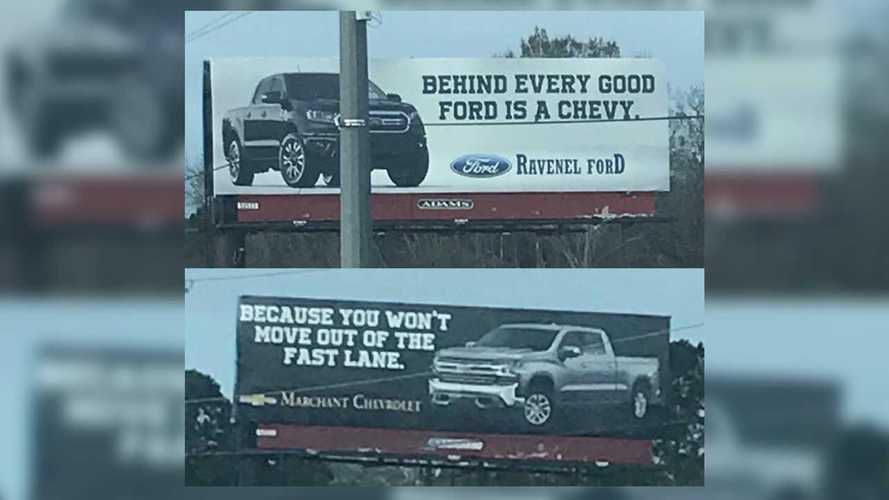 Here’s a bit of Ford-versus-Chevy fun to take you into the weekend. A couple of days ago, Men’s Humor on Facebook posted a curious photo showing a pair of large roadside billboards.  At the top of the post was a simple caption: “Looking forward to watching this billboard battle escalate.”  We’ll let the post speak for itself.

We’re guessing the Ford advertisement went up first, as it’s a generic poke at all things Chevrolet. The Chevy ad, however, is quite specific and very well done indeed. We’re not taking sides here, but come on – let’s give a shout-out to the creative mind at the Chevy dealer that came up with this idea. We did some in-depth research (okay, we did a 30-second Google search) and found that Marchant Chevrolet and Ravenel Ford are in fact neighbors. Both are located in Ravenel, South Carolina and are only separated by a couple of miles.

We've Seen This Before:

For the record, billboard advertising isn’t cheap. The large wrap alone can cost hundreds of dollars, and rental for the space can easily run into the thousands. Assuming the Ford billboard went up first, someone at the Chevy dealer was compelled enough to spend serious dinero for an admittedly brilliant public comeback. We salute that kind of initiative, and hey, that investment is going far beyond the people commuting along Savannah Highway. This post from Men’s Humor presently has 62,000 shares and 2,700-plus comments. It’s safe to say this little billboard war is officially viral.

The million-dollar question now is, where do we go from here? Clearly the next move belongs to Ravenel Ford – perhaps a quip on the Silverado’s controversial new face is in order? Or maybe it’s time for the closest Dodge dealer to get a witty Ram ad up there? In any case, we will definitely keep an eye out for potential retribution in the weeks to come.