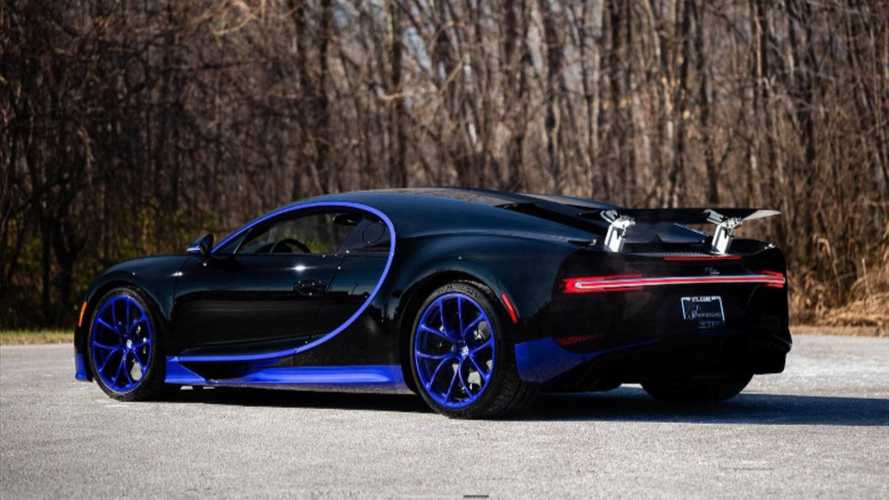 Heck of a deal.

Brand new, a Bugatti Chiron will set you back more than $3 million (depending on how you spec it). But if you’re looking to snag one on the, um, "cheap," Bonhams is offering a lightly used example as part of its upcoming Scottsdale sale. The auction house estimates it could for as little as $2.8 million – what a steal!

The Bugatti has just 365 delivery miles (587 kilometers) on the odometer – so it’s as close to new as you can get without actually being new. Number 79507, it was one of the first 100 examples offered in the U.S. and wears a factory Nocturne paint job on most of the body, with a two-tone Sprint Blue Effect livery on the lower body panels, signature line, and grille. And in order not to disturb the delicate, very expensive paint job, the car is wrapped in a clear bra.

And even though it’s "used," the car hasn’t been touched by a customer yet. The Chiron sat at a Bugatti dealer for months, well maintained, and underwent its first annual service on November 29th, 2018 by the owning dealer. It’s even still under warranty; the Chiron keeps its factory four-year warranty until September of 2021, and includes the original window sticker, build records, service records, photos of its assembly at the factory, and the stainless steel flight case filled with factory supplied extras in its sale.

The Chiron Is Stupid Fast:

All of it can be yours if you head over to next month’s Bonhams Scottsdale auction. Doors open to the preview on January 15th, but this Bugatti – and others – will cross the block beginning January 17th at 11 AM.

Bugatti Chiron #795072 was 1 of the first 100 cars delivered by the factory to the United States. The menacing Nocturne body is spectacularly adorned with a two-tone Sprint Blue Effect livery on the lower body panels, signature line, horseshoe grill, the base of the wing mirrors, underside of the spoiler, and the wheels, which house massive black calipers. The combination is as stunning as it is unique. The cockpit is clad in full Beluga Black leather with silver stitching throughout.

With only the 365 delivery miles on the odometer, the hypercar is essentially brand new. The car was delivered to the official Bugatti dealer and has never left their care. All recommended services, including the first annual service which was performed on November 29th, 2018, have been carried out by the selling dealer, and the car remains under its factory 4-year Worldwide Warranty until September of 2021. To ensure that immaculate Nocturne and Sprint Blue paint remain in their factory delivered state, the majority of the car has been wrapped in a transparent protective film, commonly known as a clear bra. To further protect the vehicle for the elements, after the clear bra was installed, the entire body and the wheels were coated with Ceramic Pro - a multi-layerable, clear, liquid nano-ceramic coating acting as an additional clear coat. Although virtually impossible to detect, if the next owner desired, the clear bra and coating can very easily be removed at any time. Accompanying the car is the window sticker, build records, service records, photos of the vehicle being assembled at the factory, and the stainless steel flight case full of the factory supplied extras.

Its pristine beauty would be a high-performance exclamation mark to any collection, but this car deserves the ownership of a serious motoring enthusiast. There is no other automobile that so deftly combines such ferocious performance with the premium levels of comfort and driving ease. As Ferdinand Piëch once suggested, his Bugattis would be cars that can rule the autobahn by day and then attend the opera that night. This exquisitely optioned example in a stunning custom livery is the epitome of hypercar achievements. Its sale presents an incredible opportunity to acquire what many consider to be the ultimate road-going machine.