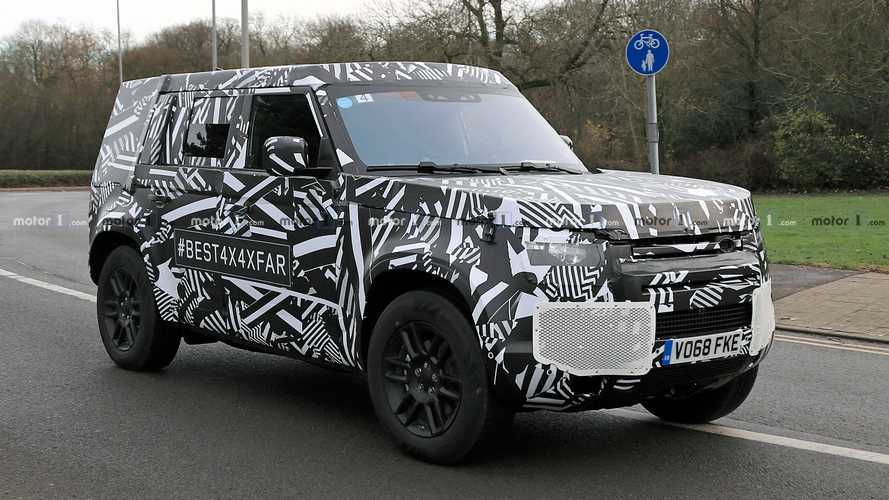 The storied SUV looks ready for its triumphant return.

In the off-roading world there are few nameplates as iconic as the Land Rover Defender, and spy photographers in the U.K. have captured the newest model on camera near Land Rover’s manufacturing facility in Solihull. Engineers don’t seem the least bit shy about parading the prototype around in public, considering the hashtag #Best4X4XFar is plastered into the camo wrap. They certainly aren’t modest, either.

What do we know about this new off-roader? Not too much at the moment, aside from the fact that we’re now seeing the actual body instead of a tweaked Range Rover Sport with Defender underpinnings. It looks to be a five-door model which would suggest this is a 110, and though we can see some rounded touches to the traditionally boxy Defender shape, there should be no mistaking it on the highway.

Aside from a snazzy new body, we’ve heard the Defender will get a tech upgrade. Specifically, it will ditch the old-school running gear for a fully independent suspension setup. We’re also hearing it might go with a small-displacement turbo diesel under the bonnet, and a hybrid model could ultimately be in the works. Given the Defender’s history and devoted fan base, those changes may not be welcomed by its core audience. However, considering how the revamped Mercedes-Benz G-Class – an SUV with a similar pedigree and hardcore following – has been accepted, we think the new Defender will fit into the modern fold just fine.

Sales of the previous Defender weren’t very good, so a proper modernization could certainly revitalize the off-roader. It could also bring the SUV back to American shores, where such updates would make it competitive in a very lucrative market. A new Defender hasn’t prowled the streets and trails of America for over 20 years, and frankly, we can’t think of a better time for the fabled nameplate to return.

When might that happen? We don’t have any inside information thus far on a potential reveal date, but expect the wrap to come off sometime in 2019.