Although it may look like the brakes failed, Lamborghini says there was nothing wrong with the car.

Racing driver Sheena Monk made her debut last weekend for Wayne Taylor Racing, but it turned out to be a horrible experience as she was involved in a terrifying crash at Laguna Seca’s challenging Corkscrew. Behind the wheel of a Lamborghini Huracan Super Trofeo Evo in her first full season, she lost control of the vehicle at the beginning of the race and slammed head-on into the barriers. Upon the powerful impact with the tires, the race car went airborne for a few seconds before landing on its wheels.

The injured driver was rushed over to the local hospital to receive immediate care. Later that day, IMSA posted on Twitter a short press release about Monk’s condition: “She is awake and alert and has been admitted to the hospital. She is in stable condition.” On Sunday morning, Sheena Monk released the following statement:

“I have yet to review what happened with my accident yesterday at WeatherTech Raceway Laguna Seca but I’m extremely grateful for the safety and strength of the Lamborghini Super Trofeo.”

Even though at a first glance it might seem the race car’s brakes failed before entering the Laguna Seca's difficult turn 8, it wasn’t the case. According to a preliminary analysis conducted by Lamborghini, there wasn’t anything wrong with the car:

“Upon initial analysis of the car data following the accident, all of the operating systems were found to be functioning appropriately, as did the car’s safety systems during, and after, impact. All of us at Lamborghini are thankful for the safety of the Lamborghini Super Trofeo race cars.”

Regardless of what went wrong with the car or if it was the driver’s mistake, the brutal impact goes to show how safe race cars have become in recent times. Exact details about the extent of her injuries are not available at the moment of writing, but we’re hoping she’ll be making a full recovery and will return to racing as soon as possible. 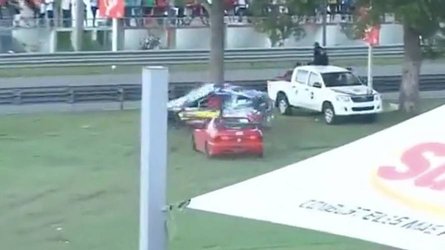 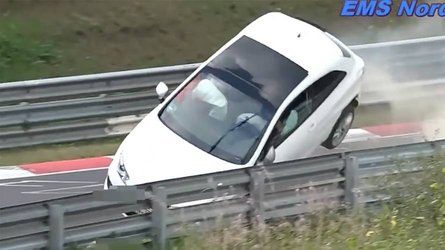 Watch A Seat Ibiza Go Nearly Airborne In Brutal Nürburgring Crash
By: Adrian Padeanu
++
Got a tip for us? Email: tips@motor1.com