The badge at the back may say "LC 500," but there are plenty of upgrades suggesting it's the hotter F version.

It was only a few hours ago when we shared a batch of spy shots with the RC F and now Lexus has been caught testing yet another F model. Indeed, after months of rumors and speculations, we finally have solid proof an LC F is in the works as indicated by these spy shots depicting a prototype featuring an assortment of upgrades. You can ignore the “LC 500” badge at the back because the stacked quad exhaust tips strongly suggest we’re dealing with the F model in the same vein as the RC F and GS F.

Moving at the front of the car, those massive air intakes are there to provide better cooling for what will surely be an upgraded engine. The front bumper doesn’t seem to be production-ready, but even so, we get to see the LC F will have a considerably more aggressive fascia. Those front wheel arches are visibly bigger compared to lesser models and that could be a sign the performance coupe will be getting a wider front track. 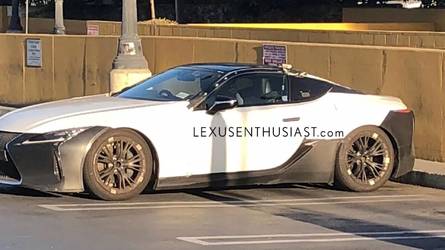 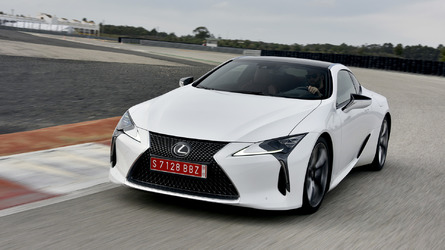 Now Everyone Can Afford A Lexus LC Thanks To A $5,000 Price Cut

Caught in Germany testing together with the new Toyota Supra, the highly anticipated Lexus LC F is rumored to feature a new biturbo 4.0-liter V8 engine with as much as 621 horsepower (463 kilowatts). However, others are saying it will use an upgraded version of the naturally aspirated 5.0-liter V8 and some have even suggested a supercharged mill, although we wouldn’t be so sure about that. Add into the equation the recent prospects of a hybrid F model, and your guess is as good as ours regarding what will power it.

Whatever engine it will feature, the LC F will pack significantly more punch than the LC 500 with its 5.0-liter V8 pushing out 471 hp and 398 pound-feet (540 Newton-meters) of torque. In addition, the F is expected to come with a weight loss, which is exactly what the doctor has ordered taking into account the LC 500 weighs a hefty 4,280 pounds (1,941 kilograms).

Expect the LC F to arrive on the market before the end of the decade.