Ruf CTR3 Is Mid-Engined 911 You Didn't Know You Wanted 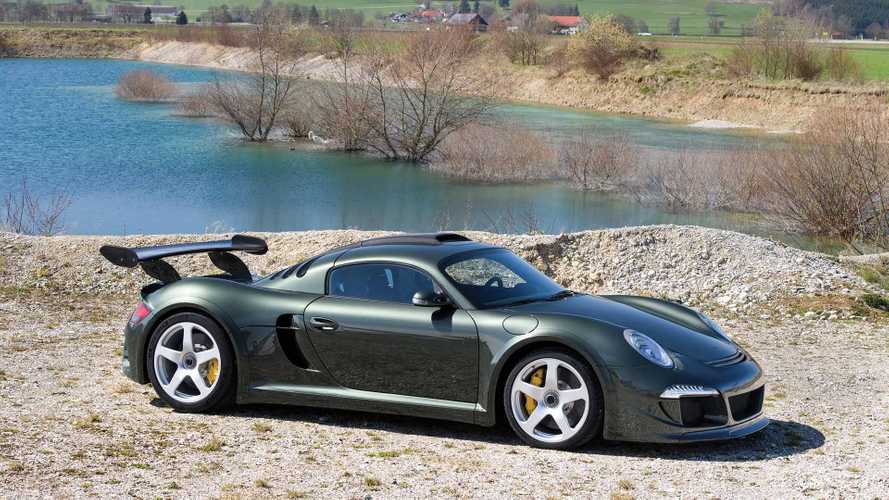 Ruf uses some 911 components to build the CTR3, but coupe is 11 inches longer for room to move the engine to a mid-mounted position.

RM Sotheby's will auction this rare Ruf CTR3 Clubsport in Monaco on May 12, and the seldom-seen supercar will sell for $965,000 to $1.1 million, according to the firm's estimates. This example was on display at Ruf's booth at the 2018 Geneva Motor Show.

While Porsche is reportedly considering bringing a mid-engined 911 to the road in the future, the CTR3 is Ruf's attempt at the concept. The supercar features a bespoke platform from Multimatic – builder of the latest Ford GT. This makes the Ruf about 11 inches (27.9 centimeters) longer than a standard 911, which provides room to slot the 3.8-liter biturbo flat six ahead of the rear axle. The mill pumps out 766 horsepower (571 kilowatts), and the output routes exclusively to the rear wheels through a seven-speed dual clutch gearbox. Ruf also offers a six-speed manual, though. The thunderous power can get the coupe to an estimated top speed of 236 miles per hour (380 kilometers per hour).

The CTR3's design remains Porsche inspired, particularly the nose that takes major cues from the 997-generation of the 911. This one comes in the dark shade Oak Green. The roof features a prominent snorkel that routes air to the engine. Slits behind the coupe's doors also likely help with venting heat. A low rear deck and prominent fenders give the tail a muscular look, and there's a big wing back there that further emphasizes the sporty aesthetic.

Opening the door reveals that this CTR3 features tartan fabric in the center of the heavily bolstered sport seats. Plaid material isn't what you usually expect to find when stepping inside a supercar, unless it's a vintage 300 SL.

According to RM Sotheby's, Ruf made fewer than 30 CTRs and just seven of those were in Clubsport spec like this one. The German company decided to go retro for the fourth-generation CTR (gallery above) introduced at the 2017 Geneva Motor Show. It looks like a 1987 911 but features a body and monocoque that are fully carbon fiber. Only the front and rear crash structures are steel. The latest model returns to a rear-engine layout, and the biturbo 3.6-liter biturbo flat six makes 700 hp (522 kW) and 649 lb-ft (880 Nm).

Folks in the market for a Ruf need to check out RM Sotheby's Monaco auction catalog. In addition to this CTR3 Clubsport, the sale also has a 1991 RCT Evo, 1994 Cabriolet, and 2012 RT 35 up for sale.