You have to watch out for herds of sheep when off-roading in Azerbaijan.

With over 40 years on the market the AvtoVAZ Lada Niva, now known as the Lada 4X4, is an icon of off-road work in the former Soviet Bloc. It's also about far from being a Formula One car as a four-wheeled vehicle can be. Red Bull Racing drivers Daniel Ricciardo and Max Verstappen recently got to experience Lada's famously tough SUV by racing against some locals through Azerbaijan's Gobustan Reservation.

The racers have perhaps the only Lada Niva ever to wear the Red Bull leaping bull livery. For the challenge, Verstappen handles driving duties, and Ricciardo is navigator – although not a very good one since he doesn't know the terrain. The locals are aware of how to avoid the herds of sheep at the reserve and are able to use this knowledge to take a lead in the race.

Ricciardo apparently had quite a bit of fun in the Niva and even suggested creating a racing series for them. “I’m talking a dozen Ladas, two dozen pro Lada drivers and just a big derby-off," he said in Red Bull's press release.

The Niva arrived in 1977 after the Soviet Union's government requested a vehicle that was able to perform well off-road – think of a Russian equivalent of the Jeep CJ or Toyota FJ40. AvtoVAZ created a high-riding, boxy vehicle with a locking center differential and high/low-range transfer case. Initial models used a 1.6-liter four-cylinder engine with a mere 75 horsepower. The version available in Russia today have a 1.7-liter mill that produces 82 hp.

In 2017, AvtoVAZ commemorated the Niva and 4X4 with a 40th Anniversary Edition. Based on the five-door body style, this limited run of 1,977 SUVs featured black accents on the exterior, stainless steel sill covers, and two-tone leather upholstery. Camouflage paint was available, too. Camouflage paint was an option for the body, too. 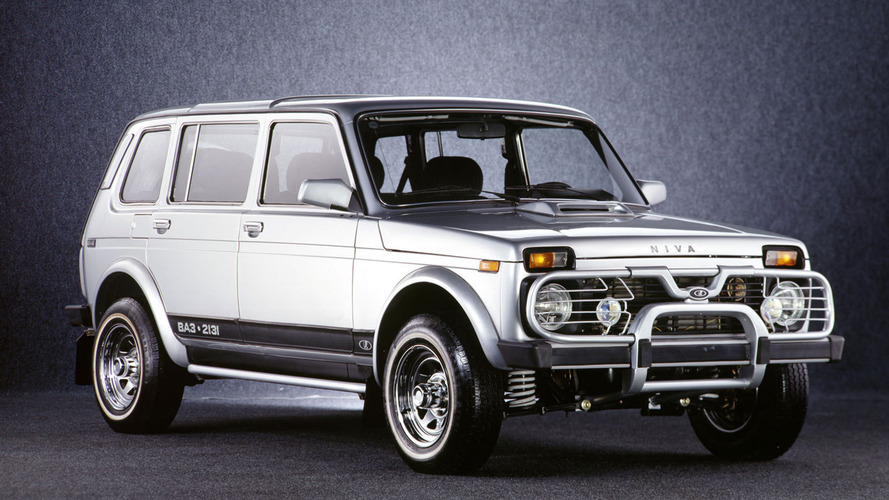 F1 duo race around on mud volcanoes in the build-up to the Azerbaijan GP.

Daniel Ricciardo and Max Verstappen are already well prepared for anything this weekend’s Azerbaijan Grand Prix might bring after taking on local drivers in a Lada 4x4 car.

Virtually indestructible beasts, Verstappen was at the wheel and Ricciardo the navigator, the duo put the car through its paces. In the end, the Red Bull Racing pair came out on top at the Gobustan Reservation. Here is all you need to know.

- The Gobustan Reservation is a UNESCO World Heritage Site but the Red Bull Racingduo were let loose on its rocky paths, narrow gullies and mud volcanoes in the former Lada Niva, now called the 4x4.

- Verstappen took to the wheel with Ricciardo as his side kick, challenging local drivers with expert knowledge of the landscape. The Formula 1 duo proving in the end to have the overall edge.

- Verstappen said: “It was a lot of fun. A lot of rocks! But it was a good day. I find it quite fascinating that so close to the sea you have this kind of landscape, it’s really beautiful. We got some fun drifting going, did a bit of filming with the cars and I have to say I enjoyed it. The local guys knew the terrain pretty well but, unfortunately for them, we were just a bit faster.

- Ricciardo added: “Fortunately, the Lada handled like an absolute gem. Any time Max got into a slide I felt he could bring it back, so I had confidence, but there were definitely some ‘oh boy!’ moments. I’m actually glad I was with Max and not the local guys! They were kind of loose. I was happy to be with Max.”

- Ricciardo has even hinted he might get his hands on a Lada 4x4 for his farm back at home, joking the day might come for an Aussie Lada derby. He said: “I’m talking a dozen Ladas, two dozen pro Lada drivers and just a big derby-off. Can we get a dozen of these to Perth please?”

- For the Australian, Baku is a return to his sole race win last season, the grand prix coming a fortnight after his win in China. Of his race chances, he said: “It feels good - good momentum and good memories of last year here. It doesn’t really change my approach to a weekend but sure, it’s nice to have a good feeling about coming into a race.”