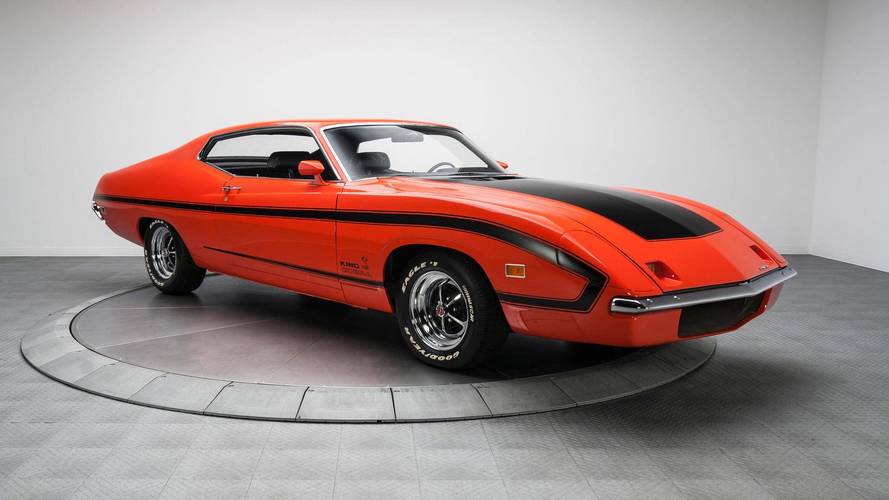 This rare Torino homologation special spent time rotting away in a field until a restoration brought it back to the road.

If you're looking to have the rarest Ford on the block in your garage, skip the application process for a new $453,750 GT and check out this 1970 Ford Torino King Cobra. It's one of just three currently known to exist, and this one is listed on MotorGT for $459,900.

The Torino King Cobra stemmed from a brief period of NASCAR in 1969 and 1970 when aerodynamics became all the rage for going faster on the ovals. This model was supposed to be a followup to the Torino Talladega and a competitor against the Plymouth Superbird. However, the King Cobra never saw production due to an executive shakeup at Ford and revised NASCAR rules.

The homologation specials featured a long hood ending in a point. The extra length forced the designers to place the headlights in recessed nacelles, and there are removable covers for hiding them when not in use. For better aerodynamics at high speed the rear glass has a convex shape.

Bud Moore campaigned cars in NASCAR and had a close relationship with Ford at the time. He reportedly saw two of the King Cobras at Ford's Dearborn headquarters in 1971 and expressed interest in them. The Blue Oval sold him both prototypes for a total of just $1,200. Moore kept one and sold the other. The owner apparently didn't understand how special the car was because a pair of Ford fans eventually discovered it rotting away in a South Carolina field. A complete restoration eventually brought the rare Torino back to road-worthy condition.

This car has a non-original Boss 429 V8 under the hood, and it routes through a four-speed manual. According to Hemmings, at least one of the prototypes came with Ford's high-performance 429 Super Cobra Jet V8, and another one had a 429 Cobra Jet with an automatic gearbox.

Inside, the King Cobra is surprisingly spartan. There are vinyl-covered bench seats at the front and rear, and black carpet covers the floor. A Hurst T-shaped gearshift emerges from the floor.