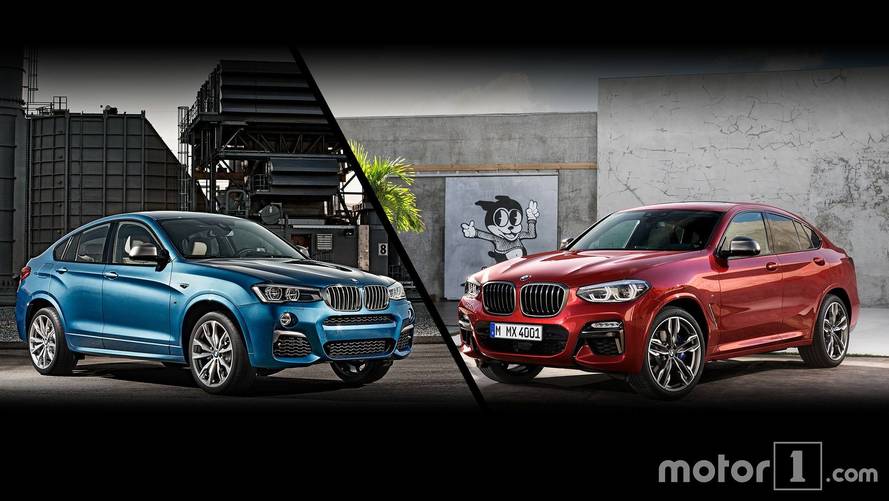 Look closely at them because many of the tweaks aren't readily apparent.

The 2019 BMW X4 is officially here, but you really need to see the SUV next to the previous generation to really notice the differences. By itself, the new crossover doesn't look much different from the old one, but seeing them side-by-side highlights the changes.

The 2019 X4's front end shows the fewest changes versus the old one. BMW's designers fit a bigger grille and arched headlights. Lower down, the foglights now have rectangular housings rather than the existing circular surrounds. The latest X4 also features a simplified fascia with three inlets, which removes the narrow opening from underneath the grille on the older model.

The updated design is far more evident when looking at the X4 in profile. The new model is 3 inches (76.2 millimeters) longer overall and has a 2.1-inch (53.3-mm) greater wheelbase. The result of this growth is that the crossover now looks sleeker and less bulbous than the outgoing SUV. The gentler rake for the rear portion of the roof helps make the vehicle appear more aerodynamic, too, by providing more of a teardrop shape to it.

Like from the side, the new X4 shows off a significantly different design from the back, and this is arguably the 2019 model's best angle because of the smoother, sophisticated appearance. The rear glass now looks flatter, and there's a visually interesting spoiler on top of it. Updated taillights offer a less complicated take on the previous crossover's L-shaped style.

BMW makes an interesting design decision inside the X4. Primary competitor Mercedes-Benz now fits its models with a dashboard that combines digital instruments and a wide infotainment screen, which creates a unified look. The previous X4 has a different take on this idea where the infotainment display integrates into the center stack but remains separate from the instruments.

For the 2019 X4, BMW positions the infotainment display on top of the dashboard. The change lifts the screen more into the driver's eye line, but it doesn't look well integrated into the cabin's design, especially compared to what competitors are doing.

The new X4 will go on sale in the United States in July, and prices will start at $50,450 plus destination for the base xDrive30i model. The more performance-oriented M40i will start at $60,450.