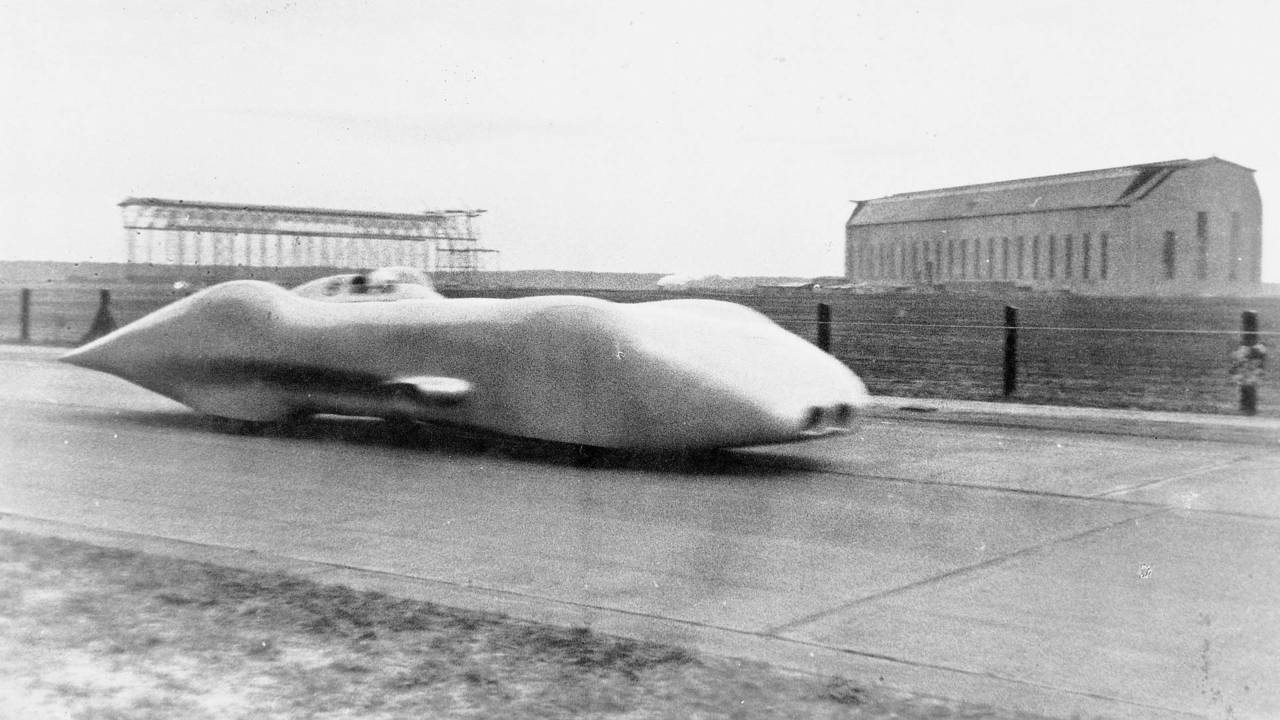 Mercedes had a need for speed in the 1930s, which culminated with the record-breaking W125. In the hands of racing driver Rudolf Caracciola, the W125 twelve-cylinder monster made history on January 28, 1938 when it established a world record on a public road: 432.7 kph (268.8 mph) over a flying kilometer on the German autobahn, specifically between Frankfurt am Main and Darmstadt.

Nearly 80 years later, Mercedes is celebrating the impressive achievement, which went on to remain untouched up until a few months ago. Indeed, on November 4 last year, Koenigsegg with its Agera RS claimed a new world record by doing an average speed of 276.9 mph (445.54 kph) over a flying kilometer. On the very same day, the W125 also took down the record for the flying mile by doing 432.4 kph (268.74 mph) – this one too improved by Koenigsegg last year when it set a total of five records.

The longevity of the W125’s records is utterly impressive and you can imagine it took a lot of effort to hit those velocities back in the late 1930s.

For starters, it needed to be as sleek as possible. Measurements done in the wind tunnel four decades later showed the body had a drag coefficient of only 0.170. To put that figure into perspective, what is generally considered as being the world’s most aerodynamic production (albeit very limited) car, the super sleek Volkswagen XL1, had a Cd of 0.189.

Then there was the engine, a 5.6-liter V12 with 765 horsepower (563 kilowatts)… in 1938. Thanks to extra carburetors, it packed an additional 29 hp (21 kW) over the original specification of the engine, which had been used eight weeks earlier in an aborted record attempt. During that period, the engineers also worked on improving reliability and optimizing the fuel/air mixture supply to each of the twelve cylinders. In addition, the body was basically redesigned from the ground up to boost aero and it benefited from the expertise provided by aircraft manufacturers.

The engine featured a bespoke ice-cooling system by placing the radiator in a container with 5 kilograms (11 pounds) of ice and 48 liters (12.6 gallons) of water. The brilliant idea came from German test institute for aviation in Berlin-Adlershof and also had a positive impact on aerodynamics as the airflow through the radiator would have increased the much-important drag coefficient.

It seems highly unlikely the new records established by Koenigsegg will last for another eight decades considering Bugatti with its Chiron and Hennessey with the Venom F5 have both announced plans to try and claim the top speed record for a production car in the foreseeable future. Even Koenigsegg has suggested the Agera RS might be able to break the 300-mph barrier, so it seems like we’re just getting started with these top speed records.

Inspiring to the present day: Caracciola’s 432.7 km/h on a public road on 28 January 1938: A Mercedes-Benz record for practically all time

On 28 January 1938, driving the Mercedes-Benz W 125 twelve-cylinder record-breaking car, racing driver Rudolf Caracciola established a world speed record on a public road: he reached 432.7 km/h over a flying kilometre on the autobahn between Frankfurt am Main and Darmstadt. A shadow was cast on this success by the fatal accident of a competitor, Auto Union racing driver Bernd Rosemeyer, on the same day. Nonetheless, the fascination for high speed has lost none of its appeal to this day: the record was only broken almost 80 years later, in November 2017. What remains unbroken is the enthusiasm for the aesthetic appeal and technical pioneering spirit of the brand. An exciting cooperation project between the Mercedes-Benz design department and the University of Applied Sciences in Munich has concerned itself with the design reinterpretation of such record-breaking cars – using innovative, cutting-edge electric drive systems.

Stuttgart. Records such as those set by Rudolf Caracciola driving a Mercedes-Benz on 28 January 1938 are an inspiration to the present day. For design students, for example: in 2016 and 2017, the “Electric High Speed” project initiated by the Chief Design Officer of Daimler AG, Prof. Dr. h.c. Gorden Wagener, working in cooperation with the Faculty of Design at the University of Applied Sciences in Munich, developed design studies based on future-orientated technologies for wheel-driven high-speed record-breaking vehicles with electric drive systems. Under the guidance of Prof. Othmar Wickenheiser, would-be automobile designers found particular inspiration in the body shapes of the historic Mercedes-Benz record-breaking cars of the 1930s, and gave free rein to their creativity. The result is outstanding design concepts for record-breaking cars capable of over 800 km/h. Almost literally electrifying insights into the project are provided by the recently published book “Electric High Speed” (Shaker Media, Aachen, 524 pages, € 119.80, ISBN 978-3-95631-626-5). Some of the design studies developed as part of the project have been implemented in the form of 1:4-scale models. The brand plans to present these and other impressive models of historical Mercedes-Benz record-breaking cars at the Techno Classica specialist fair in Essen (21 to 25 March 2018).

Review. The 1937 motor racing year was going outstandingly for Mercedes-Benz: the brand won the European Grand Prix as a major triumph. And it wanted to cap this with an equally stunning world record. An undertaking that was doomed to failure. During the record attempt week in Frankfurt am Main in October 1937, the W 125 with a 5.6-litre V12 engine was unable to better the competing cars of Auto Union. The Stuttgart-based brand withdrew the car from the competition – and decided that the car should be comprehensively developed further for the next record attempt. Within just eight weeks, Rudolf Uhlenhaut, technical manager of the racing department, and the Board of Management member for development, Max Sailer, had the necessary work under way. The next record-breaking attempt was to take place on 28 January 1938.

The instructions issued to the engineers were to modify the chassis and engine and develop a completely new vehicle body. The reason was above all the excessive front axle lift of the 1937 version, which at times led to loss of steerability.

Aerodynamics: Ideas from the aircraft industry

Mercedes-Benz received major impulses from the aircraft industry for its new vehicle body: among others, it was the development departments of aircraft manufacturers Ernst Heinkel and Willy Messerschmitt that made the recommendation to shorten the front overhang and give the car a rounder front end. In addition, the front end was lowered and more sharply tapered. This had the desired effect of reducing front axle lift.

A longer and more raised rear end reduced lift at the rear axle. The cross section of the car was also more heavily rounded off, which reduced susceptibility to crosswinds. And finally the cockpit glazing was modified to resemble the shape and cross section of a teardrop. Racing driver Rudolf Caracciola, the European Champion in 1935 and 1937, had previously rejected such a solution owing to the risk of distorted visibility. Then Mercedes-Benz, working with a supplier, found a visually and aerodynamically acceptable solution. The uncompromisingly streamlined form of the car was also accentuated by the covered wheel arches.

The diameter of the air inlets in the front of the streamlined body was usually small. This was made possible by the innovative ice-cooling system of the car for the record attempt. The radiator was housed in a container holding 48 litres of water and 5 kilograms of ice. If needed, an additional cooling effect could be achieved with dry ice. This eliminated a strong airflow through the radiator, which would have made itself felt with a higher drag coefficient.

The suggestion to use ice-cooling came from the German test institute for aviation in Berlin-Adlershof. Four decades later, measurements in the Mercedes-Benz wind tunnel showed how successful equipping the W 125 record attempt car with its new body was. In its race configuration, the Silver Arrow achieved an excellent drag coefficient of cd = 0.170.

The V12 with a displacement of 5577 cubic centimetres which had been used during the aborted record attempt in October 1937 was completely stripped down and optimised. Its reliability was to be increased, e.g. by means of a richer combustion mixture and reinforced piston pins. Other improvements included nickel-plated piston crowns to reduce the risk of charring. The piston clearance was also increased. And finally Georg Scheerer in the engine workshop of the racing department ensured a steady supply of fuel/air mixture to each cylinder.

Test bench trials confirmed the success of all this work. On 29 December 1937, an output measurement prior to installation in the vehicle showed an output of 525 kW (714 hp) with no additional slide carburettor. On 6 January 1938, Scheerer minuted that with these additional carburettors, the output would be around 563 kW(765 hp). This was 21 kW (29 hp) more than the engine had achieved during the record-breaking attempt eight weeks earlier.

“The car hugs the road beautifully”

This was a record-breaking attempt that nobody had previously dared to embark on. And it paid off: in the morning of 28 January 1938, just after 8 a.m., Rudolf Caracciola achieved the highest speed ever recorded on a public road on the autobahn between Frankfurt am Main and Darmstadt, later the A 5 federal autobahn, which had been opened in May 1935. He clocked a speed of 432.7 km/h over the flying kilometre, and also broke the record for the flying mile with a speed of 432.4 km/h. In each case the speeds were calculated as the mean between runs in both directions. Caracciola praised the vehicle in his later biography: “The car hugs the road beautifully. This is already noticeable on the approach to the test stretch. It feels quite different from the design of last year.” This impressively demonstrated the success of the aerodynamic improvements with the fundamentally newly developed, streamlined body.

Auto Union attempted to break this new Mercedes-Benz record on that same day, however Bernd Rosemeyer, the competing company’s most successful racing driver, suffered a fatal accident when his car was caught by a gust of wind at top speed and veered off the road.

Caracciola’s speed record on a public road remained unbroken for almost eight decades. It was only on 4 November 2017 that it was broken with a new record of 445.54 km/h. The vehicle concerned had almost twice the engine output. This makes the record-breaking Mercedes-Benz W 125 a shining example of efficiency to this day. The original car from 1938 now occupies a place of honour in the Mercedes-Benz Museum: in the presentation of record-breaking cars in Legend Room 7 – “Silver Arrows – Races and Records”.