Buy This Suzuki Jimny Turbo Imported From Japan Before We Do 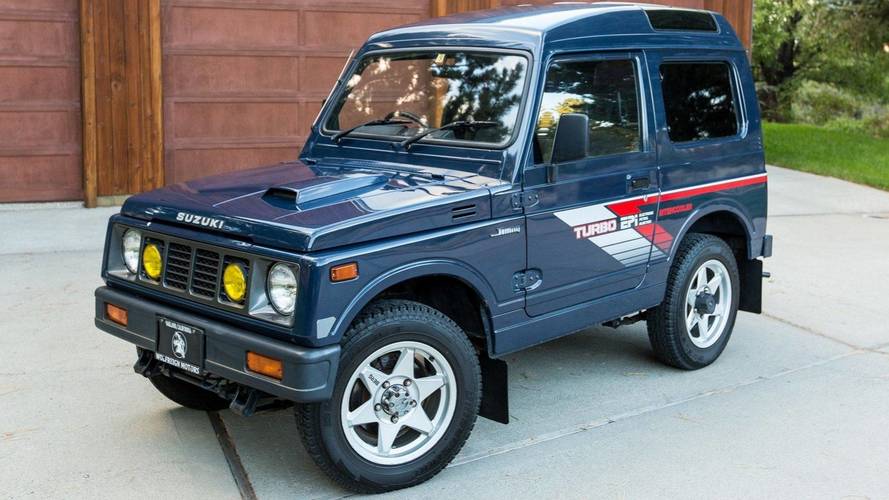 Hard to tell the car is almost 30 years old.

If you’re in the market for a true 4x4 while staying on a very strict budget, the Suzuki Jimny aka Samurai is no doubt an interesting choice. Take for example this JDM-spec 1988 model imported to the United States in December 2016. It’s up for grabs without reserve on Bring A Trailer and currently the highest bid stands at $3,500 with a little over three days to go.

Located in Reno, the Jimny is being sold with a clean Nevada title in the owner’s name and appears to be in great condition inside and out. We would get it only for those retro-cool “Turbo EPi” body graphics and the tall roof with dual windows at the back. Replacing the black tint of the rear windows would be on the to-do list as it seems to have been poorly applied and it’s beginning to bubble, but that’s only a minor issue.

The cutesy Suzuki has 16-inch Berg wheels shod in 175/80/16 Bridgestone Dueler A/T tires and is powered by a tiny three-cylinder 543cc turbocharged engine linked to a five-speed manual gearbox. With this being a competent off roader, it comes with a two-speed transfer case (high range and low range). According to the seller, the engine received an oil change last month.

Inside, we have a soft spot for the “Turbo” logo on the seats, which look surprisingly nice for a car built nearly three decades ago. The biggest concern is the absence of the original radio, hence why there’s a gap in the center console. On the flip side, the wiring is still there, so all you will have to do is find a cheap radio on eBay and plug it in. All of the gauges are working, including the rather cool inclinometer and altimeter.

Driven for only 58,392 kilometers (36,283 miles), this 1988 example is probably one of the nicest Suzuki Jimnys to land stateside and is an ideal low-cost solution for an off-road adventure during the weekend.