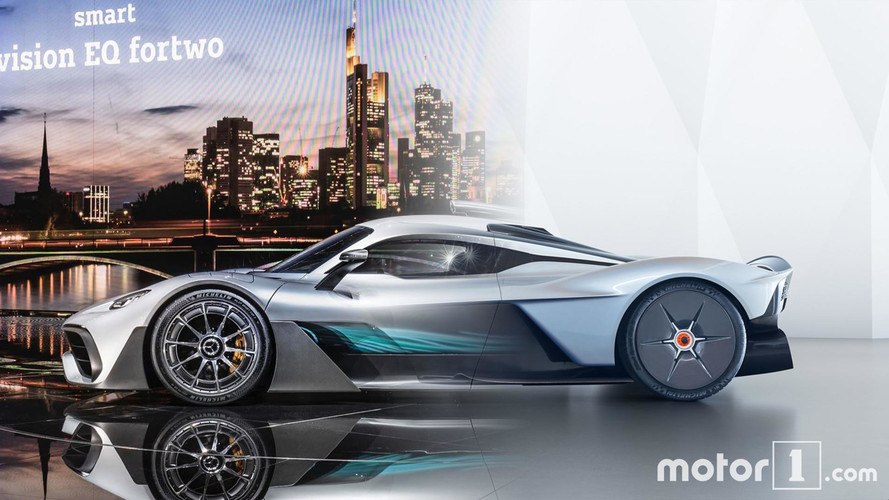 Which hybrid hypercar is the new king?

It was over four years ago that we saw Porsche, Ferrari, and McLaren electrify their new top-tier offerings to produce unprecedented power with the 918 Spyder, LaFerrari, and P1 respectively. Now, Mercedes-AMG and Aston Martin are throwing their respective wrenches into the hypercar paddock. At the 2017 Frankfurt Motor Show, Mercedes finally introduced the Project One after an agonizingly long teaser campaign. It’s been a hotly anticipated car for a while, but it’s not going unchallenged. Aston Martin has its own hypercar in the works, the Valkyrie, and we’re certain once both hit the road, the internet car culture will burn everything to the ground arguing which new hypercar is better than the other.

Both the Project One and Valkyrie are road-going cars. The Project One looks like it could slip in between a Koenigsegg One:1 and a Ferrari LaFerrari at the 24 Hours of Le Mans and go as unnoticed as any hypercar could. The Valkyrie, on the other hand, looks like it has a cameo in Blade Runner 2049.

Both cars are designed to do more than just look good – it’s all about efficiency, aerodynamics, and speed. Aston just happens to take a more extreme approach with the Valkyrie, though both have design similarities, such as the pronounced wheel arches and low hoods.

The Project One is subtle, with a low, wide mouth that will hug the road. On the roof is the air intake, another F1 feature. The intake morphs into a shark fin that helps lateral stability when cornering at high speed. The rear has a wide, retractable wing, a center-exit exhaust, and large diffusers.

The Valkyrie is missing a traditional lower fascia, instead having a front wing hanging off the blade-like front end. Looking at the Aston directly from the front and rear illustrates the extreme design of the Valkyrie. It’s almost as if the cockpit is suspended between the tires. It’s stunning to look at. Out back there are dual, center-exit exhausts and a wing.

Details on the Valkyrie powertrain are scarce. What we do know is that an all-new naturally-aspirated 6.5-liter V12 built in collaboration with Cosworth will sit behind the driver making at least 820 horsepower, giving the Valkyrie a power-to-weight-ratio of 1:1. But it wouldn’t be a hypercar without some added oomph. There is an element of hybridization in the form of a KERS (kinetic energy recovery system). This should bring total horsepower close to 1,000, with the Valkyrie aiming to weigh just 1,000 kilograms – 2,205 pounds.

We know much more about the Project One. It will have over 1,000 hp and 16 miles (25 kilometers) of all-electric driving range. Mercedes derived the 1.6-liter turbocharged V6 engine from its F1 engine, and it can rev to 11,000 rpm. The Project One also packs four electric motors. One is linked to the engine for additional boost, with output to the rear wheels at over 671 hp (500 kW). Another drives the electric turbocharger. Then there are two more electric motors, one at each front wheel, rated at 120 kW (161 hp) each that can spin up to 50,000 rpm. Lithium-ion batteries store the energy, adding about 220 pounds (100 kg) of weight.

Another neat feature the Valkyrie has is the screen mounted on the steering wheel, which is removable – because of its race car roots. Ingress and egress appear to be much easier on the Project One as the Valkyrie has a massive tub lip to step over.

Hypercars are hyper-exclusive, which means both the Valkyrie and Project One are available in super-limited quantities. Rumor is the Project One is sold out already, meaning the 275 copies of the €2.275 million (that's about $2.27 million) hypercar already have homes. The Valkyrie will have a production run of 150 road cars and 25 track-only versions. Price is estimated at £2-3 million ($2.6M-$3.9M). Sadly, this too has already sold out.