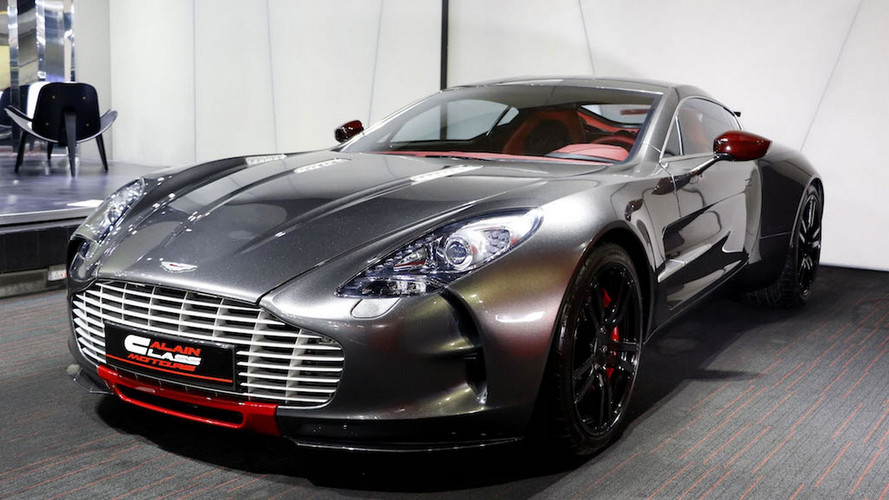 Aston Martin exclusivity at its finest, the drop-dead gorgeous One-77 was strictly limited to 77 cars, but this one right here is even more of a rare sight. That’s because we’re looking at the “Q-Series” part of a small run of seven units from within the supercar’s total production run. It was introduced towards the end of the model’s short life cycle and received its moniker to denote that it was spruced up by the company’s own bespoke division. Q by Aston Martin has since been responsible for other special models, including a fancy blue DB11 shown in Geneva earlier this year.

The One-77 Q-Series was available in four different liveries, with the one being shown here featuring a metallic grey exterior and a striking red interior with numerous exposed carbon fiber areas. It appears to be in top notch condition as it should be considering the car has barely been driven. The odometer reads a mere 992 kilometers (616 miles), so the car is virtually new.

Like all of the other “regular” One-77 cars, the ones belonging to the Q-Series have the same naturally aspirated V12 7.3-liter engine with a monstrous 700 horsepower (522 kilowatts) and 553 pound-feet (750 Newton-meters). All that Aston Martin muscle is channeled to the rear axle through a six-speed automated manual gearbox. With the 0-62 mph (0-100 kph) taking fewer than 3.7 seconds en route to a top speed of more than 220 mph (354 kph), the One-77 is not only beautiful, but also seriously fast.

The car is up for grabs at a dealer in Dubai for an unspecified amount of money. Just to get an idea about how much it costs, the very same dealer had yet another One-77 Q-Series a few years ago for a cool $3 million. That’s even more than the $2.3M track-only Vulcan.

As a final note, Aston Martin is currently prepping another special model: Valkyrie. The new hypercar with four-digit horsepower will debut in 2018 with a multi-million-dollar price tag to match its performance and exclusivity.