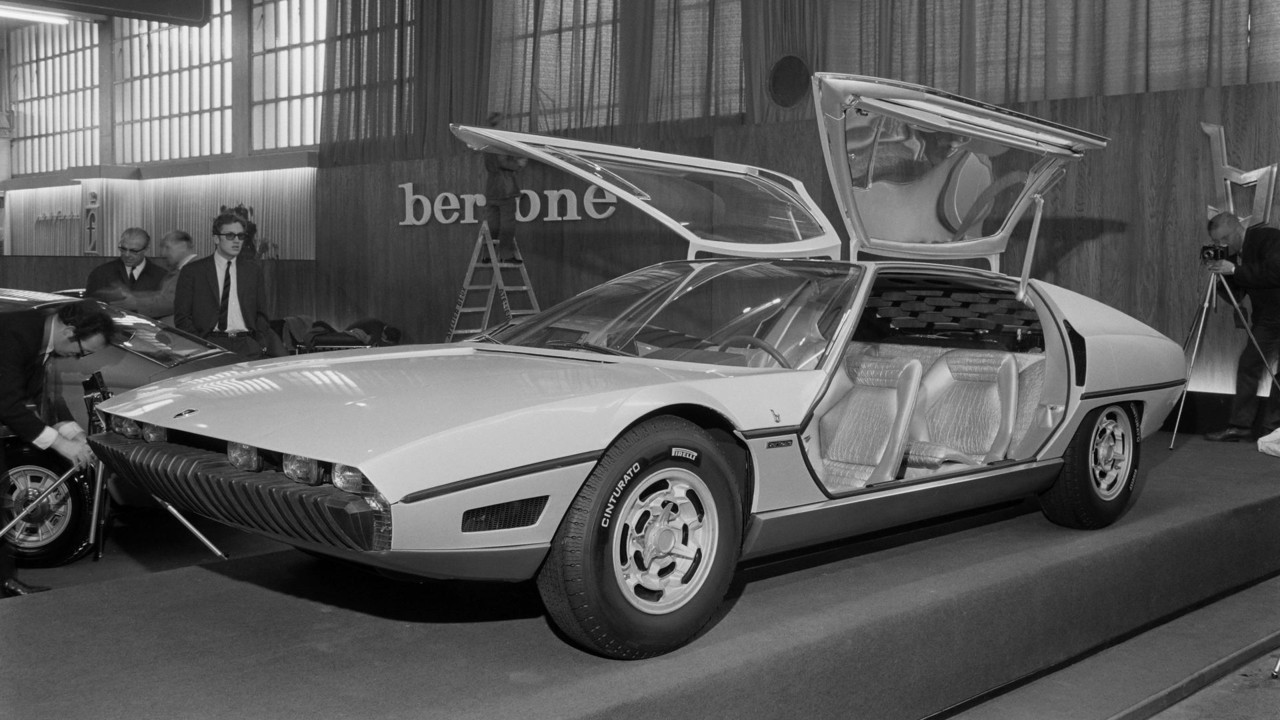 Coming to you in black & white straight from the 1967 Geneva Motor Show.

From the unique engine to the see-through doors, the Marzal with its avant-garde design is far from being an ordinary Lamborghini — if there even is such a thing.

Introduced at a time when Lamborghini had the 400GT and the gorgeous Miura, the TP200 Marzal as it’s known by its full name was designed by Marcello Gandini for Bertone with a whopping 48.4 square feet (4.5 square meters) of glass created in collaboration with Belgian company Glaverbel. Unlike the 400GT with its 2+2 layout, the concept was envisioned as a full four seater and was built on a significantly modified chassis borrowed from the Miura.

The wheelbase was stretched by 120 millimeters (4.7 inches) to 2,620 mm (103.1 inches) as a way to free up space for people sitting in the back. One of the most striking features is represented by the pair of transparent gullwing doors in the same vein as those of the original Mercedes 300SL. Aside from being quite spectacular back in the day, the unusual door layout also allowed the driver and both front and rear passengers to effortlessly get in and out of the car also thanks to the absence of a B-pillar.

During those times, Bertone was embracing a hexagonal honeycomb theme and you can see the influence even in the shape of the seat’s cushions and backrests. Full-width polished metal, a one-piece engine cover, and aluminum slats riveted together to serve as a substitute for the rear window made the Marzal even more special.

And then there’s the engine. An unusual 2.0-liter (1,964 cc) inline-six unit, which was basically the Miura’s 3.9-liter V12 sliced in half and turned 180 degrees to sit behind the rear axle. This made it more of a rear-engined car as opposed to the mid-engine layout of the timeless Miura — considered as being the world’s first production sports car to have a mid-engine setup. Fed by a trio of Weber carburetors, the six-cylinder engine sent its 175 horsepower to the road through a five-speed manual gearbox directly sourced from the donor car.

If you’re wondering what happened to the car, it was sold back in 2011 by RM Sotheby’s for €1,512,000. While the Marzal never received a production version, the Espada launched a year later carried over most of the concept’s design traits, but the glass doors and the rear-engine setup didn’t make it. Interestingly, the early Espada prototypes still had the spectacular gullwing, yet these were ultimately dropped for the final production model.