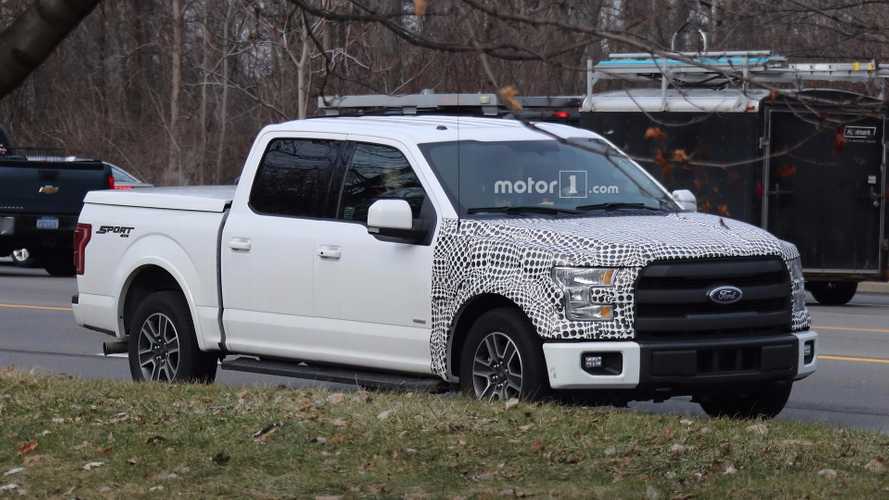 Ford doesn't have to disguise much to test its hybrid pickup in public.

Ford has been working behind the scenes on a hybrid version of the bestselling F-150 pickup for a few years. Now, spy shots are giving us a look at the company’s effort by revealing a test mule for a plug-in version of the popular truck.

The only major changes to the truck’s design are on the front fenders. Look closely and you can see flaps of camouflage. One of these likely hides the socket for plugging in the pickup. Ford’s testing team covers the hood, too. There’s no indication of any major styling tweaks, though. According to our spies, the truck also appears to have a slightly narrower track than a normal F-150, but the possible change isn’t very evident in the photos.

The spies shooting this mule also claim that it sounds like a four-cylinder engine is under the hood. However, Ford CEO Mark Fields reports the hybrid pickup "will offer powerful towing and payload capacity and operate as a mobile generator.” Achieving those benchmarks could be rather difficult from a PHEV with four-pot powerplant, unless the company is planning to use powerful motors and high-capacity batteries to run them.

Fields says that the F-150 hybrid arrives in 2020. If it’s a PHEV, then F-150 Energi would be the likely name for the model to follow the rest of the Blue Oval’s branding. The company will build the F-150 Hybrid alongside other variants of the pickup at its truck plant in Dearborn, Michigan. They’ll be available in North America and the Middle East.

Before the recent announcement confirming hybrid versions of the F-150 and Mustang, Fields discussed the possibility of an electrified truck on NPR. At the time, he said the model would be not be a plug-in and would be rear-wheel drive. This test mule sports 4x4 badges on the rear fender, though. So if this is really a PHEV under development on the road, it would seem to point to a change of strategy for the company’s greener pickup.