As the world goes gaga for SUVs and trucks, this sad dozen is getting chopped.

In 2019 Acura moved just over 1,000 RLX sedans from its showrooms, so it’s not hard to understand why the luxury brand decided to abandon the E-segment sedan. Unlike the recently revealed 2021 TLX, the RLX made no secret of its front-drive underpinnings, lending it a Honda-plus appearance that never resonated with premium buyers.

And in spite of an available, NSX-inspired hybrid model with 377 horsepower and standard SH-AWD, the RLX didn’t offer the crisp handling dynamics we’ve come to expect of most modern luxury cars. Still, we hope Acura continues its upward trajectory and comes out with a Lexus LS–rivaling RLX replacement in a year or two.

The closed-roof Alfa Romeo 4C went away after 2019, and now the Spider will follow suit. Known for its rorty, turbocharged 1.8-liter four-cylinder mounted in the middle, the 4C sports car was the first reasonably priced Alfa to be sold in the U.S. in nearly two decades. However, the company now has a lineup of more consumer-friendly vehicles, including the Giulia sedan and Stelvio small SUV. There’s just no room in the brand’s strategy for a high-strung sports car that last year sold just 144 examples in the U.S. Alfa Romeo will send the 4C Spider into the sunset with a special edition called Italia, boasting Misano Blue paint and a smattering of badges and decals.

The BMW i8 Coupe and i8 Roadster will be retired this year. The plug-in hybrid family was among BMW’s first (alongside the i3 REx), but the i8 supplemented its eco-friendly image with a slinky, two-seat supercar body and scintillating performance. It isn’t as overtly green as other PHEVs, but it has served its tenure as a halo vehicle for BMW’s i sub-brand of electrified vehicles. Rumors suggest BMW will replace the i8 with a harder-core PHEV supercar inspired by the Vision M Next concept, but nothing is official.

Buick is the Rodney Dangerfield of car companies, building solidly respectable vehicles that nevertheless “can’t get no respect.” The Regal is one such example, which served as Buick’s best-selling passenger car in 2019 but still ranked a distant fourth when including Buick crossovers in the contest. It’s a shame, because the Regal GS, Sportback and TourX offer something different to American consumers – American luxury and comfort in a Euro-chic, practical body style.

The full-size Cadillac CT6 is already out of production, with dealers selling off existing inventory of 2020 models. The big Caddy's offerings were simplified for 2020, with only the base 3.6-liter V6 and mighty 4.2-liter Blackwing V8 – gone are the 2.0-liter turbo four, 3.0-liter turbo six, and plug-in hybrid powertrain. The CT6 never really caught on with buyers, although most of us who've driven one have loved it.

Chasing Some Fleeting Joy In The Cadillac CT6 Platinum Blackwing
⠀

The fullsize Chevrolet Impala is the last of its platform-mates to be sold, the Buick LaCrosse and Cadillac XTS having been discontinued for 2019. But alas, Chevy’s biggest sedan is finally being put out to pasture after 2020. The Impala has been a consistent fixture in Chevy’s lineup for the last 20 years, with an off-and-on history that spans all the way back to 1958. We hope this isn’t the last we hear of the big, comfortable, spacious four-door. 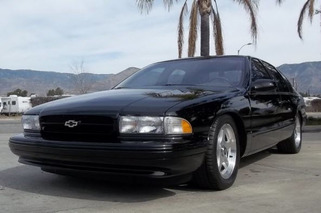 The Chevrolet Sonic is a wholesale improvement over its predecessors, the Aveo and Metro, but in its eight years on the market, it’s only been facelifted once. Although still fun to drive, it’s outclassed by newer, more efficient competitors. Add to that significant showroom in-fighting between the Sonic and the more popular Trax crossover and you get a recipe for failure. Chevrolet will likely not replace the Sonic, instead marketing the sub-$20k Trailblazer to budget-oriented buyers.

Dodge itself admits that you can’t even buy the aged Grand Caravan in all 50 states, apparently because it no longer meets so-called ZEV emissions standards for the model year 2020. The Grand Caravan soldiered on alongside the far-superior Chrysler Pacifica minivan since the latter was introduced for 2017, serving as a fleet-friendly, inexpensive minivan option. But now that Chrysler offers a cheaper, decontented Voyager that shares the Pacifica’s much better platform, it’s time for the Grand Caravan, the U.S. market’s original minivan, to take its curtain call.

The Dodge Journey, which has the uncanny distinction of being the last vehicle on the U.S. market with a four-speed automatic transmission, is finally being axed after 2020. Currently, due to emissions regulations, the Journey can't even be registered in states that conform to California clean-air standards, so if anything, we're surprised it's taken Dodge this long to cancel the antiquated, thoroughly mediocre Journey.

Ford discontinued most of its core sedans and hatchbacks last year, including the Fiesta, Focus, and Taurus. The midsize Fusion will follow suit after the 2020 model year, allowing Ford to encourage potential sedan customers into the new-for-2020 Escape or Explorer. The Fusion offered snappy Aston Martin–inspired design cues and a few interesting powertrain options – the 325-horsepower, twin-turbocharged Fusion Sport jumps to mind – but it just isn’t as popular with midsize sedan buyers to justify its current existence.

The Ford Mustang Shelby GT350 is one of the company's most exciting vehicles to drive, but it is being functionally replaced by something even spicier, the supercharged GT500. Still, it's hard not to be sad about the lesser Shelby – especially since its traditional six-speed manual transmission and high-revving, flat-plane-crank 5.2-liter V8 appeals to purists more than the supercharged, dual-clutch GT500.

What's more, it offers a bit more of a balanced driving experience. While the GT500 can sometimes feel overpowered, the GT350 almost always has enough grip in reserve to tame its 526 horsepower – especially in stiffened, grippy GT350R form.

Honda will axe the coupe version of the Civic lineup after 2020, leaving the sedan and hatchback to carry the compact-car torch. Swoopy, fastback styling isn't enough to save it over the more conventional Civic sedan or practical Civic hatchback – current sales mix has the two-door going home with only 6 percent of Civic buyers. A new Civic family is reportedly on the way for the 2021 model year, and the coupe is not likely to return.

Honda's nimble, enjoyable, and spacious Fit will go away after 2020. We should have seen this coming – Honda had already confirmed that the redesigned Fit we saw at the 2019 Tokyo Motor Show would not come to the US for the time being. That doesn't make the news any happier, as the Fit is possibly the most enjoyable subcompact car on the market.

The Lexus GS strikes a nice middle ground in the company’s sedan lineup, which is why we’re sad it’s being axed after 2020. It offers surprising handling verve and a well-balanced chassis, but its design and interior are dated, hailing from the 2013 model year with sporadic updates since then. Rather than redesign the GS for a new generation, Lexus is throwing in the towel to focus instead on strong sellers like the RX crossover and ES sedan, neither an adequate replacement for the studly GS F. Fans of zesty Japanese luxury sedans needn’t worry though – a new IS is on the way, reportedly with an available 5.0-liter V8.

The Lincoln Continental, which was only recently reintroduced for 2017, is headed back to the automotive graveyard at the end of the 2020 model year. With the similarly timed death of the MKZ sedan, all 2021 Lincolns will be crossovers or SUVs, allowing the brand to cash in on their popularity and high profit margins – at the expense of heritage names and traditional three-box styling. We're all the sadder that the unique Continental Coach Door is going away, too.

Unsurprisingly, the Lincoln MKZ will suffer the same fate as its Ford Fusion platform-mate. The midsize luxury sedan served as a decent foil to the Toyota Avalon, Lexus ES, and dead-in-the-water Buick LaCrosse. Unlike those decidedly slushy vehicles, however, the MKZ offered all-wheel drive and a 3.0-liter twin-turbocharged V6 borrowed from the larger Continental – 400 horsepower set the MKZ apart in a big way. But like many other sedans in its segment, sales of the MKZ flagged in the face of the Lincoln Corsair (née MKC) small crossover.

The legendary Mercedes-Benz SL will be discontinued after the 2020 model year, but fret not. It will return after a one-year hiatus for 2022. The next-generation SL is reportedly moving to a 2+2 interior layout, with a pair of tiny rear seats for children or emergency use. It’s possible all future Mercedes SLs will be AMG products. A leak of the next-generation roadster’s model names revealed them all to feature just two numerical digits – SL 43, SL 53, SL 55, SL 63, and SL 73 – with several plug-in hybrid and 4Matic offerings rumored.

After more than two decades of continuous production, the Mercedes-Benz SLC and its SLK predecessor have reached the end of the road. The SLC’s death was announced last year by way of a 2020 Final Edition car that features a coat of yellow paint that closely matches that of the first-generation SLK. The SLK and SLC were Benz’s first relatively affordable sports cars in decades, and the model line had one of the first modern iterations of a folding hardtop.

In a world where high-riding crossovers of all different sizes are rapidly supplanting sedans and minivans as the transport of choice, each year we bid goodbye to many “traditional” vehicles. We’re not even halfway through 2020 and already, automakers have announced they’ll be culling these 12 cars from their respective lineups, in some cases to free up production capacity for the CUV, SUV, and truck offerings that today’s buyer demands. Pour one out for this sad-sack dozen.

Every Vehicle Being Killed Off For 2022
++
Comment!
Got a tip for us? Email: tips@motor1.com