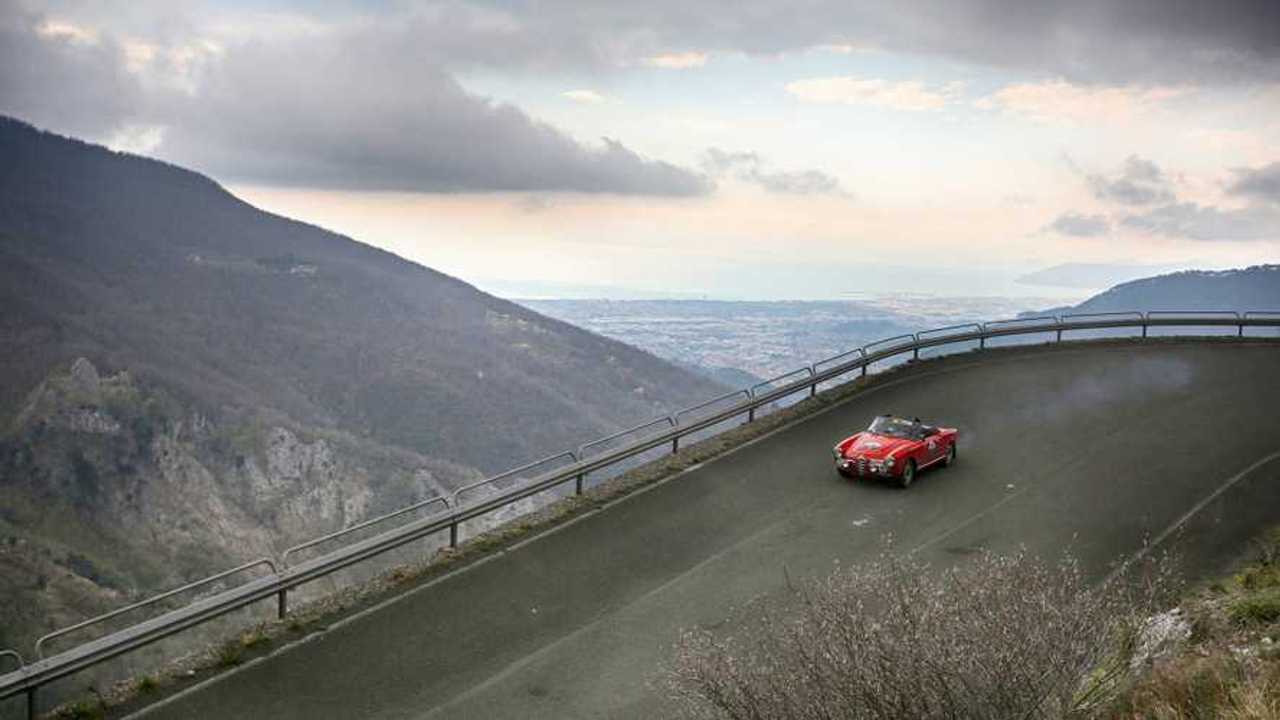 Regularity rally is just the place to exercise a classic car.

Competitive outlets for classic car owners are few and far between. There’s the concours circuit, which requires fastidiousness and extreme attention to detail, while track work – be it at the local street circuit or the drag strip – puts extreme strain on a vehicle’s mechanicals and comes with the risk of a crash. What’s a classic car owner to do if he wants to feel the rush of competition, but doesn’t want to risk his ride any more than he would simply driving down the road?

The best option is regularity rally, a competitive event where instead of trying to get from A to B as fast as possible, drivers are trying to complete a route as close to a target time as possible. It’s an event ready made for classic cars, putting as much strain on their mechanicals as any other scenic drive, while allowing their owners to get out and enjoy several days at the wheel. We discovered that after two days of driving in the Terre di Canossa rally, a regularity rally that runs annually through Tuscany’s stunning Italian terrain.

The rally is organized by Canossa Events, a company that made its name setting up major celebrations for Ferrari. Its fingerprints are all over multiple Ferrari cavalcades in both Italy and the Middle East, along with driving tours across the Italian peninsula. The company’s expertise also extends to personalized group tours around Italy. Participants need only show up with their cars and enjoy the drive, as Canossa Events plans routes, meal stops, and lodging at high-end hotels. To find out more about Canossa events and its founder, Luigi Orlandini, check out our interview with the affable Italian.

Of course, we didn’t run a classic car in the rally. While the organizers generously gave us access to an Alfa Romeo Spider, the idea of driving an unfamiliar classic car on wet, unfamiliar roads in a country where we didn’t speak the language sounded less than fun, so we opted for something more modern and reliable to follow the rally in – an Abarth 595 Turismo, a car American consumers know as the 500 Abarth. We weren’t driving the newest car in the rally, but we were driving the most affordable.

The Terre di Canossa attracts a huge array of cars and teams. This year’s event, the ninth ever, included 103 cars (104 if you count our little Fiat), and there were some fine automobiles in attendance. Fittingly considering the setting, Italian cars accounted for nearly half the vehicles in the rally, with Alfa Romeo and Ferrari badges on 13 and 12 vehicles, respectively. A total of 16 cars were built before World War II, some from long dead brands like Italy’s Om and France’s Amilcar. And some were just exceptionally rare and expensive.

There was a stunning Jaguar XK120 Lightweight (which sadly broke down early on the first day), multiple Porsche 356s, a Maserati Mistral, a Zagato-bodied OSCA 1600 GT, two Ferrari 250 GT Lussos, and two Ferrari 275 GTBs. A 1966 Ford Mustang, a 1968 Mustang Convertible, and a second-generation Chevrolet Corvette represented the United States, while a quartet of modern Ferraris – a California T, a 458 Speciale, a California T, and an 812 Superfast – were easily the fastest, most powerful cars in attendance.

Impressively, few of these cars – even the pre-war entries – suffered rally ending maladies. The aluminum-bodied XK120 was one of the few, followed by the Zagato-bodied Osca and an MG TF 1500. But those were the only vehicles we saw on the side of the road.

But these machines had little on their drivers. This, the ninth Terre di Canossa, featured 206 drivers from countries as far flung as Qatar, Romania, and Argentina. They joined Italians, Swiss (the tiny, mountainous country provided nearly 20 percent of the 206 participants), Brits, and a dozen Americans for the three-day jaunt around Italy. Most surprisingly were the sheer number of women running the event – 40 percent of the contestants were female, and all-girl teams were hardly uncommon. A pair of Swiss ladies were at the helm of the Mustang Fastback, while two more – featured in a video posted to Motor1.com’s Instagram – handled a Fiat 124 Spider, to name a couple.

This unusual gender distribution is largely down to the accessibility of regularity rallying. It’s a bit like golf, both in how easy it is to get started with and how difficult it is to master. The basics require cars to complete special stages as close to a target time as possible while keeping in mind their time on the overall rally. So if you’re consistently a few minutes too slow on one section, you can make it up on the next stage (and vice versa). Unsurprisingly, there is math. And charts. And stopwatches. Like we said, it’s easy to pick up and hard to master.

A big part of that is because unlike golf, regularity rally (like traditional rally) is a team sport that requires tremendous communication skills. While the driver’s responsibilities are obvious, the co-driver’s duties are just as important. The person sitting shotgun mans the stopwatch or smartphone (yes, there are dedicated apps for time-speed-distance rallies), or for very serious or old-school teams, an on-dash rally computer. When co-drivers aren’t working the clocks, they handle all the navigation, providing directions to the driver via a route book. The Terre di Canossa’s route book included 158 pages of directions, with each direction including signage, landmarks, and a basic diagram of the upcoming turn. It’s not as difficult or foreign as rally pace notes – if you’re co-driving, don’t plan on shouting gibberish like “two left over crest opening into four right” at your driver – but getting lost is a constant concern.

Then again, when the countryside is as beautiful as Tuscany, getting lost isn’t the worst thing that can happen. The three-day rally took us between two high-end hotels, spending one night at the Grand Hotel Salsomaggiore, in Salsomaggiore Terme and two nights at the Augustus Hotel in the sleepy, seaside town of Forte dei Marmi. In between were some stunning surfaces, ranging from flowing autostradas, cramped streets that first appeared in medieval times, a sprint through a famed walled city, and mountain passes that were better suited to moving goats than driving classic cars.

Following along in the rally is an exercise in hurrying up and waiting. We’d blister across the twisting tarmac in our little Fiat and harass our fellow rally contestants, giving them a good incentive to exercise their classic cars. In a particularly thrilling section heading down from the mountains into Forte dei Marmi, we had a three-car convoy, with an Austin Healy 3000 whipping around corners at the front, a Ferrari California T in back, and our red Fiat in the middle. The Healey and our Fiat scampered away in the tight, twisty corners, only for the Ferrari to catch up on the straights. It was a thrilling drive, with the Healey squealing its cross-ply tires around the corners as our Fiat pursued.

The orange-tree-lined Piazza Aranci in the town of Massa welcomes the rally.

But often – and wisely, considering our pace and the age of the other cars – rally organizers broke up these segments with special stages. These are the meat and potatoes of the rally, as teams attempt to navigate the winding roads as close to a target time as possible. For us, that meant backing off and letting the classics do their thing. The last thing we wanted to do was push one of the classics too hard and see them ruin their time.

The stunning roads and competitive aspects are only part of what makes the Terre di Canossa so special. The entire event is a constant barrage of stunning experiences. Before the rally starts, there’s a black-tie dinner in the town of Salsomaggiore Terme. The next morning, cheering crowds waving Italian flags watch as the 100-plus cars drive down a red carpet toward the start point. That first day ended at the Ducal Palace on the orange-tree-lined Piazza Aranci, in the Tuscan comune of Massa. We spent that first evening dining in the palace.

The next day saw the rally circle Pisa, with the Leaning Tower and its equally beautiful (but far less famous) cathedral in the distance. We eventually arrived in the maze-like walled city of Lucca, which Top Gear fans will recognize as a start of a scavenger hunt from the show’s 17th season. Winding and twisting through Lucca, we eventually ended up driving atop the Renaissance-era walls that surround the city. That second day ended with a run through the mountains, back to Forte dei Marmi, where organizers hosted a spared-no-expense beach party. The next day (which we weren’t able to hang around for, owing to the start of the New York Auto Show), ended with a massive awards ceremony for the competitors. Like we said, the experiences just keep coming.

And those winners? In first place, a pair of Argentinians in a gorgeous French Racing Blue 1927 Bugatti Type 40. Second place went to a 1939 BMW 328 with two Italian drivers at the helm, while third place went to one of our favorite entries, an adorable 1955 Fiat 1100 sedan helmed by another pair of Italians.

DISCLAIMER: Motorsport Network, the parent company of Motor1.com, has a financial interest in Canossa Events. We were invited to attend the Terre di Canossa and our travel and lodging paid for so we could share this unique experience with our readers. If you'd like to know more about future events organized by Canossa Events, click here.