See What Lies Behind The Hull Of The Starship Enterprise 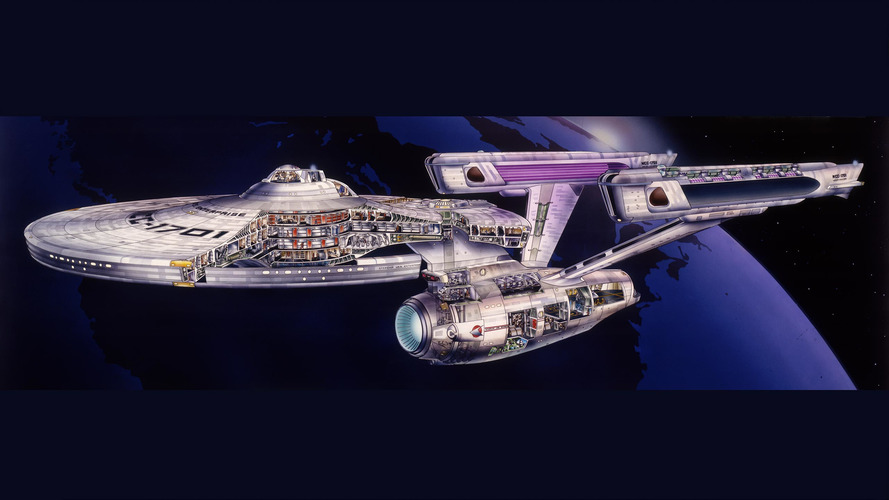 Sometimes truth is stranger than fiction. Yes, Star Trek's Starship Enterprise is headlining Motor1 in suspicious proximity to the first day of April, with a claimed link to Harley-Davidson no less. It’s true that galactically awesome automotive artist David Kimble is the man behind this Enterprise cutaway. It’s also true that he did sketch a vintage Harley-Davidson, among many other things in his continuing career. But there’s more than just a passing connection between these two worlds.

I had to know more about this, not to mention how Kimble managed to create a detailed cutaway of perhaps the most iconic machine in all of science fiction. So I dialed him up to chat briefly about the Enterprise, and to get a better understanding of how Trek fans and Harley riders are related. I only had a few minutes to talk but that was more than enough time to get all my questions answered, and I learned something about David Kimble in the process. He doesn’t mess around when it comes to efficiency, procedure, detail, and accomplishing his goals.

“I was a mechanical engineer for the first 10 years of my career, and I left in 1976 to be a professional artist,” said Kimble in a phone interview. “I wanted to design racing cars, so one of my early gigs was a job hopper – temporary help – so I could leave at any time for a racing job. One of the temporary positions I took was on the Apollo program; I was one of the engineers they brought in after the astronauts died in the Apollo 1 fire. Because of that credential, my sales representative John Steinberg sold the production people at Paramount on me to make all the plans that the Enterprise models were made from.”

Let me say that again – Kimble made the plans for the upfitted U.S.S. Enterprise used in 1979’s Star Trek: The Motion Picture. The movie's designers and builders created models for the film from his plans, which he then photographed along with set interiors to do the cutaway you see here. For a year and a half, Kimble’s studio in Burbank, California was basically Starfleet interior headquarters.

The movie's designers and builders created models for the film from his plans.

“The hardest part was making it all match the script,” he continued. “The interiors only existed as film sets, which were all independent. So I had to take the exits and entries from the script and match it up to the interior designs in a way that made sense, deciding where everything was on the ship while getting it all nice and neat for the hardcore trekkers so they couldn’t beat me up. Starting with the second film, the production crew used it for set direction so it’s truly the official guide to the Enterprise.”

Over a million copies of the cutaway poster were sold, but he wasn’t the license holder for the first run. He got with Steinberg, his sales rep and colleague who brought him to Paramount in the first place, to license and produce a second run of Enterprise cutaway posters.

Here’s where the Harley connection comes in: Steinberg was also working a deal with Harley-Davidson to produce and sell posters that Kimble would create. He procured a license from the manufacturer and plans were in the works to create a cutaway of a 1949 Hydra-Glide.

“The Harley illustration was for a series of posters on vintage bikes we were going to do for them in 1987,” Kimble explained. “But then Steinberg passed away and he had the license, so the project was stillborn and sat until 2014 when I finally painted it for my book.”

Kimble did more than just complete the Harley project. In his book David Kimble’s Cutaways: Techniques & Stories Behind the Art, he features it prominently over the course of several pages in a step-by-step process, showcasing how he goes from mere lines on a sketch pad to a painted, finished cutaway.

So there you have it – Star Trek and Harley-Davidson, forever fused in this most interesting of circumstances. Would the Harley sketch have happened without Kimble’s partnership with Steinberg, forged through his work on the Starship Enterprise? There’s no way to know for sure, so I’ll just say this in closing: Ride to live, live to ride, live long, and prosper.