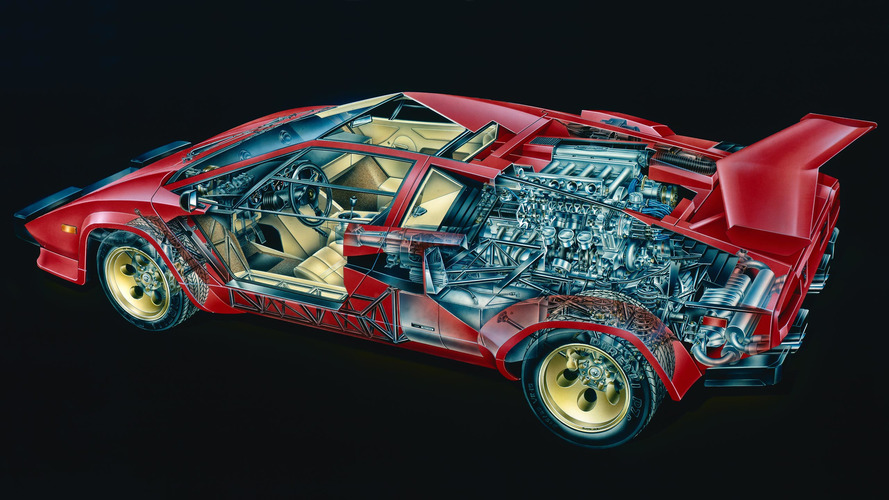 Peeling back the skin of the greatest supercar of all time.

Could the Lamborghini Countach be the greatest supercar of all time? That’s a bold statement; in fact it’s a very bold statement when considering such deliciously exotic machines as the Ferrari F40, Pagani Zonda, and Bugatti Veyron, not to mention more recent Lambos like the Murcielago and Aventador. And yet, there’s something about the Countach that endures, or rather, transcends the passage of time. If that doesn’t quite make sense, ask yourself this: Will the Countach ever look old?

It should look old. This iconic 1980s supercar actually debuted as a prototype at the Geneva Motor Show in 1971. The first production Countach LP400 went on sale in 1974, festooned with much the same angular styling as the prototype. And it’s not as if the Countach underwent significant updates through the years. 1979 saw the addition of the fender flares and insanely wide tires that would ultimately define the Countach’s style, but aside from minor exterior tweaks and performance enhancements in the years that followed, the Countach remained more-or-less identical to its mid-1970’s debut until production ended in 1990.

Will the Countach ever look old?

For his famous Countach cutaway, David Kimble chose an early U.S.-spec model – specifically a 1986 5000S Quattrovalvole. The giveaways to its U.S. ties are the gaudy black front and rear bumpers that were required to meet U.S. crash standards, which didn’t come from the factory until 1985. That adds a bit of intrigue to Kimble’s artwork, because he visited Lamborghini’s manufacturing facility in St. Agata Bolognese to capture the reference photos required for the drawing. Most U.S. bound cars had the bumpers shipped separate from the car for dealer installation, and even then owners would commonly remove them in favor of preserving the smooth Countach lines.

We also know it’s the Quattrovalvole from the clearly visible four-valve arrangement in the engine bay. The cutaway also gives a fantastic perspective of the Countach’s unique longitudinal powertrain design that places the gearbox ahead of the engine, with a drive shaft running backward through the sump to the rear differential.

The designer behind the Countach is one Marcello Gandini, who worked for Bertone at the time and was also responsible for the Miura and the Lancia Stratos, among numerous other notable vehicles. He’s also the brainchild behind the Countach’s scissor doors, which have since become synonymous with Lamborghini.

He was in his 20s when he began his tenure at Bertone and was barely 30 when he penned the Countach. Some say his early designs are closer to what you might find sketched out on a high-schooler’s notebook – rich with a kind of youthful flamboyance that ignores constraining principles such as function or practicality. Perhaps that’s why the Countach could well be the greatest supercar of all time; Gandini didn’t design it to play by the rules, so it doesn’t.

And when we talk about the Countach as being the greatest supercar, we’re certainly not speaking in terms of performance. The original LP400 had a quad-cam 4.0-liter V-12 producing 370 horsepower – exceptional for the time but easily eclipsed today by many average sport sedans. Even the ultimate evolution of the Countach – the 5000 Quattrovalvole with 5.2 liters of displacement, 48 valves and 455 horsepower – is outclassed by the current crop of American muscle cars, never mind the reigning hypercars with brain melting acceleration and airline-rivaling top speeds.

And yet, if you drove a Countach to the next Cars & Coffee supercar meet, it would get just as much attention – if not more – than a LaFerrari, McLaren P1, Porsche 918, or even its great-grandson, the Lamborghini Aventador. That might not seem like a big deal; old cars routinely draw attention at car show. But people don’t flock to the Countach because it’s old. Why is that?

Driving the Countach was often a very warm experience.

While the Countach is unquestionably a visual motoring masterpiece, the opposite has often  been said about life behind the wheel. High operating temperatures were often problematic not just for the Countach but many Italian exotics of the day. The cutaway helps to showcase the functionality of the Countach’s iconic air ducts and scoops to keep things cool, and it also helps to show why things tended to stay so warm for driver and passenger in the cockpit. With a sizzling engine literally at your back, side windows with just a few inches of travel, and air conditioning best described as theoretical, driving the Countach was often a very warm experience.

One could say there’s an ironic twist at play here, because the same extraordinary styling that gives the Countach such a powerful, timeless presence can also make people forget it’s actually a seriously old-school machine. The Countach has no electronic assists; in fact, it has no electronic anything, save for its AM/FM cassette stereo. It has no creature comforts. It has no power steering. It’s not even that clever of a car – the mechanics are rather straight forward, and don’t forget, they are rooted in early 1970s technology.

In terms of automotive evolution, early 1970s technology isn’t terrifically different from the earliest days of the automobile, whereas the 40-plus years since the Countach entered the scene has completely revolutionized not just the automotive realm, but the entire world. It makes one wonder what the Countach would’ve become had Gandini created it 20 years later. Would it have been softer around the edges? Would it have been easier to drive? Would the design make some compromises for functionality and practicality? If so, would it still have become the icon it is now?

A very strong argument can be made for the Countach’s notorious shortcomings actually enhancing its appeal. The interior is spartan, with deeply carved seats that offer little padding. The pedals are positioned awkwardly far to the right. The gearbox occasionally requires a hammer to swap cogs. The visibility is terrible. The clutch pedal is heavy. The steering is heavy.

Lamborghini built the Countach to be a high-strung, exclusive, in-your-face performance machine.

It was in production for 16 years and went through five notable updates – the LP400, LP400 S, LP500 S, 5000 QV and the 25th Anniversary Countach. None of those updates addressed any of these issues. Instead, Lamborghini made the car faster and even more visceral with the fender flares and massive wing, the latter of which is often shunned by Countach purists. To celebrate Lamborghini’s 25th anniversary, the Countach added even more scoops and Ferrari-esque lower side strakes to challenge the Testarossa for 1980s flamboyance – again to the disdain of purists.

It’s not as if Lamborghini didn’t care, but finesse and refinement were the domain of manufacturers like Mercedes-Benz and Rolls Royce. Lamborghini built the Countach to be a high-strung, exclusive, in-your-face performance machine – a race car for the street with looks that did absolutely nothing to disguise that fact. The heavy clutch, lack of power steering, poor visibility – it’s all a part of the Countach experience and when you talk to Countach owners, they agree. It’s not meant to be an easy car to drive. You have to want to deal with it, put up with it, and learn to master it. And when you do, there’s a sense of motoring satisfaction that’s tough to find with modern supercars.

During the Countach’s 16-year run, only 2,049 were built. Even without its status as an iconic, game-changing supercar, that kind of exclusivity leads to significant value and collectability. In the 1990s when the Diablo was the hot new Lamborghini, you could’ve picked up a decent Countach for less than $100,000. That’s still not cheap, but today you won’t touch one for less than $300,000. And that’s for later models with some mileage on them – dip back to the 1970s and early 1980s and you’ll need half a million dollars to take one home.

It may not be the fastest supercar, or even the prettiest. It’s certainly not the easiest to drive. But the Lamborghini Countach established a whole new design standard and performance metric for exotic cars. Its design was so revolutionary and so far ahead of its time that the shock wave from its introduction still reverberates today. It’s a combination of old-school mechanical bits with a shape that remains futuristic over 40 years after its debut.

That’s why it became the pin-up poster car for generations of car crazy kids. That’s why to this day you can still buy Lamborghini Countach posters. That’s why those kids who’ve done well in life are now shelling out half a million dollars for a fussy, uncomfortable car that’s tough to drive and slower than a $50,000 Camaro. It’s wild. It’s amazing. It’s shocking. It’s awesome.

It’s the greatest supercar of all time.