In November 1982, David Kimble and noted automotive photographer Neil Nissing visited Petty Enterprises in Level Cross, North Carolina. They’d just watched Richard Petty drive his No. 43 STP Pontiac Grand Prix to a fifteenth-place finish at the Atlanta Journal 500, after which they headed north to the race shop. Aside from gathering the photos Kimble would need to illustrate the King’s 1982 NASCAR Pontiac, the duo had ample opportunity to speak with Richard and his crew, and with the Petty residence being right next door, they also spoke with Richard’s dad, NASCAR legend and inaugural Daytona 500 winner Lee Petty.

He probably didn’t realize it at the time, but Kimble was capturing the waning days of what many feel was NASCAR’s golden age.

I’m not talking about the Petty legacy. Petty Enterprises would endure from 1949 until 2008 and eventually merge with Gillett Evernham Motorsports to become the present-day Richard Petty Motorsports. Richard Petty would continue racing full-time until 1992, winning a few more events in the process. His son Kyle also established a strong career in NASCAR, both as a driver and a broadcast commentator. In 2016 America, the name Petty is still synonymous and quite active with America’s greatest spectator motorsport.

So when I say golden age, I’m talking about the cars of NASCAR. 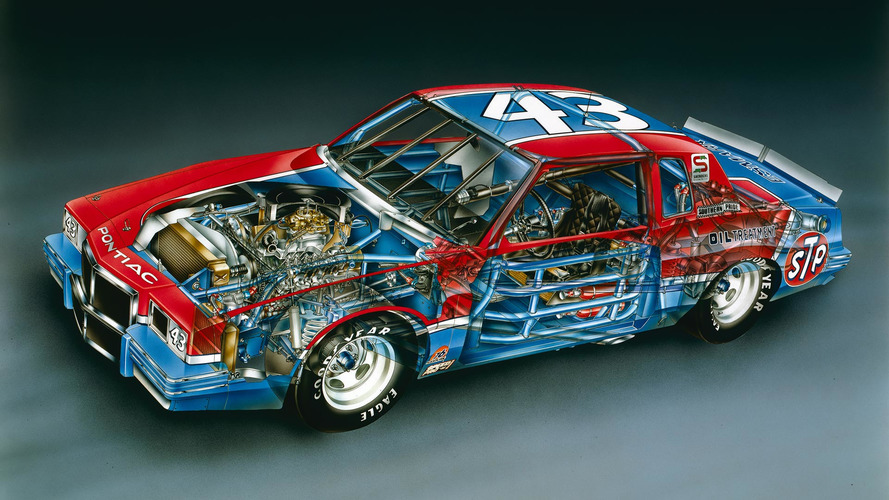 I know what readers are thinking right now, and I agree – there’s nothing golden age about a 1982 Pontiac Grand Prix. Richard Petty’s NASCAR-spec Grand Prix had plenty of power from the 358 cubic-inch V8 up front, but in the real world you could only choose between a pair of weaksauce V6 engines or Oldsmobile’s infamous V8 diesel, an engine so catastrophically awful that it single handedly killed large-scale diesel production among passenger cars in the United States.

But take another look at Kimble’s illustration, drawn from photos of the exact car Petty drove in Atlanta that November day back in 1982. Take away all the sponsor decals, fill in all those cutaway sections, and remove all mention of make or model, and you’d still have the slim quarter windows. You’d still have the notchback roof. You’d still have the graceful, sweeping beltline. You’d still have the long hood, stretching forward to a pointed front clip flanked by a pair of genuine 1980’s bumper guards. Even with the quickest of glances you’d know this was a G-Body Pontiac Grand Prix.

That’s not the case with today’s NASCAR race cars.

A few years ago I had the fortune to spearhead some NASCAR sponsorships in the Truck and Nationwide Series for a company I worked with. We were slated to sponsor a driver in a Dodge Ram at Daytona, but when I visited the team a couple days early, imagine my surprise when the truck was actually a Ford F-150. Later that day the wrap on the front of the truck body was given a Dodge remake. I never learned the specifics of that whole arrangement, but switching from Ford to Dodge was literally just a case of switching stickers. The bodies were essentially identical.

That’s why so many racing fans look to the 1980s as the last great run of NASCAR’s stock cars. Yes, they were purpose-built tube-frame race cars, but the sheet metal outside was still unique to manufacturers and highly accurate to the real-world model. The front-engine/rear-drive layout was the same. The proportions were the same. The marketing premise of win on Sunday, sell on Monday that drove auto manufacturers to invest millions of dollars into NASCAR racing programs still applied, because fans could get behind both the driver and the car. 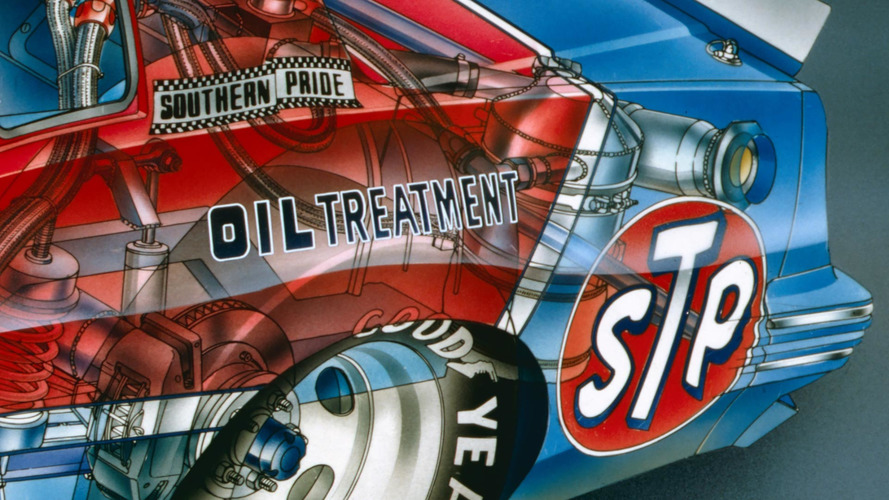 David Kimble would ultimately be called upon to illustrate numerous NASCAR models. But in the same way those older race cars stand out for their styling, so does Kimble’s 1982 Pontiac illustration.

Once upon a time, stock cars were more or less “stock.” During his conversation with Kimble at the Pontiac photo shoot, Lee Petty talked about driving a 1946 Buick Roadmaster to the first official NASCAR stock car race at Charlotte in 1949, racing it, and driving it back home. The cars became notably less stock in 1966, when NASCAR implemented tube frames for safety concerns over less durable unibody construction. Portions of the tube frame are clearly visible in Kimble’s illustration, but if you look close you’ll find he actually includes most of the frame, notably around the rear quarter panel where subtle lines and slight variations in shading bring it to life.

The November photo shoot for source material was timely, because the Atlanta race was actually the last for that particular car for the year. Crew members began dismantling sections of the car on the spot for Kimble and Nissing, then wheeled out a bare frame on a dolly, giving them a rare chance to see and photograph external and internal components all at the same time, within the context of the same photo shoot. This certainly played into the precise placement of detail found in this cutaway.

The prominent driver side reinforcement beams and Petty’s bright white 43 on the roof are certainly standouts, but along with the meticulously crafted engine, that rear quarter panel section is where you’ll find some of the memorable details in this illustration. Fuel lines and suspension components mix wonderfully with the trademark GM G-Body rear side windows and sharp roof lines. The solid axle and differential pumpkin sneak in behind the racing seat. The stock 1982 Grand Prix had drum brakes on the back, but if you take a close look you’ll see Petty’s NASCAR version doesn’t just have the proper discs, but vented discs.

One of the more difficult challenges Kimble had on this cutaway had nothing to do with components or photographs, but ensuring key sponsor logos were still visible. To preserve accuracy he couldn’t simply move them to another spot on the car, but it was still necessary to show what was behind them. To a degree, this dictated where and how he could show the Grand Prix’s inner workings. This can be seen on the rear quarter panel with the careful shading, allowing some of the detail beneath the sheet metal to come through while keeping the sponsor logos clear and intact. This process would prove to be more challenging on later cutaways where numerous sponsor logos cover the entire car. He also had some help from Petty, who explained which sponsor logos were the “most important” ones.

At the time of this illustration, NASCAR’s popularity was on the rise. Ironically, the rapid growth that would take NASCAR from regional series to national obsession with global reach would also lead to the end of its golden age. By the end of the 1980s, GM would take the next big step in extracting the stock from stock cars, recasting the Pontiac Grand Prix as a front-wheel-drive car and dropping the Monte Carlo for the front-wheel-drive Chevy Lumina. Meanwhile, both cars would race NASCAR with V8 power and rear-wheel drive. Ford would hold out a few more years with the Thunderbird, until commissioning an oddly shaped NASCAR body of its already oddly shaped Ford Taurus sedan to take the sport even further from its showroom stock roots. 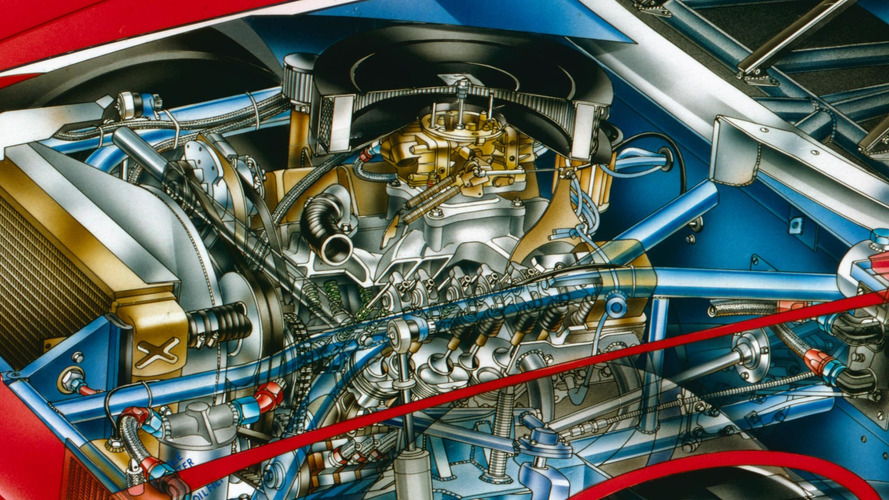 By this time, NASCAR popularity had peaked. Much has been written about the various rules and format changes in recent NASCAR history that, depending on who you talk to, either make the racing more exciting or the whole thing more boring. The “Car of Tomorrow” debut in 2007 finally eliminated all uniqueness among the cars by establishing common body templates. That eased a bit with the Generation 6 cars in 2013, but modern NASCAR designs are still predominantly defined not by the vehicle’s style, but by the body wrap.

That’s why Kimble’s 1982 Grand Prix is such a standout among his many racing cutaways. It isn’t just another great illustration of an iconic car. He captured a moment in time when NASCAR was still all about manufacturers and individuality, when racing drivers were down-to-earth rock stars instead of untouchable movie stars, and the machines they drove still had enough DNA to warrant the name stock cars. Somehow, that essence comes through in this illustration.

Kimble didn’t simply create a beautiful cutaway of Richard Petty’s Pontiac. He captured the twilight years of the golden age of NASCAR.

Technical illustrator David Kimble has been drawing cutaways of some of the most important cars and race cars in existence for over 50 years. A graduate of the Pasadena Academy or Technical Arts, Kimble has painstakingly produced dozens of accurate cutaways based on actual engineering drawings, CAD files, and hands-on inspection, documented with photographs. His career pursuit began in 1964 and he has continued to push the boundaries of hand-drawn illustrations, appearing in many publications including Motor Trend and Car and Driver. Kimble resides in Marfa, TX, and operates a studio where these drawings – which often take months to produce – are carefully crafted without the use of computer technology.

7 Photos
Photo by: David Kimble
By: Christopher Smith
++
Got a tip for us? Email: tips@motor1.com