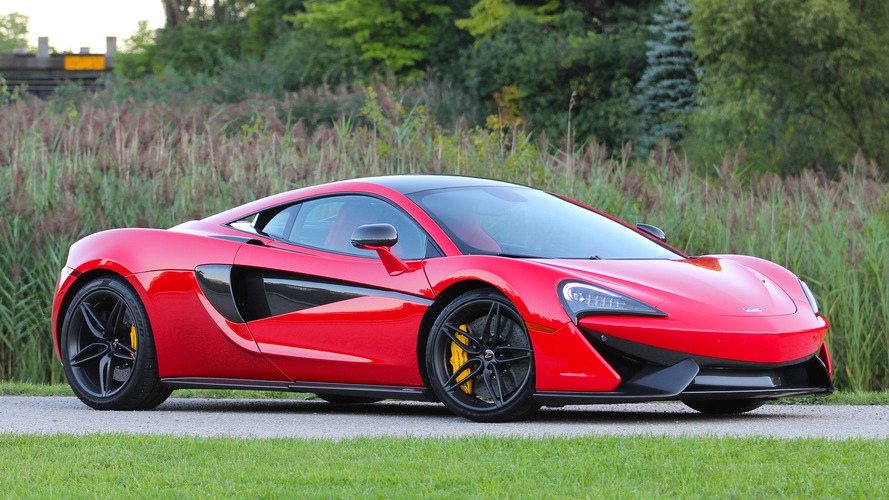 A brilliant driver’s tool that never ceases to stun.

I’m running up a hill on my favorite backroad, and as I crest the summit, my stomach sinks as I prepare to shoot down toward a wide left-hander. The red McLaren 570S is glued to the pavement, the biturbo V8 behind my head shouting, “Faster! Faster!” And yet, I’m experiencing a strong instance of déjà vu. I’ve done this before, and in this car. And the overwhelming sense of blissful euphoria I’m feeling, it’s… familiar.

Immediately, my mind goes back to a spring trip to the Canary Islands, where I had a quick drive in a red 570S against the stunning backdrop of banana plantations and volcanic rock formations. I remember those stunning roads and how this “Sport Series” coupe truly feels like a proper supercar, begging me to push harder and take every turn with ever so slightly more speed than my pussyfoot internal limits normally allow.

Back at home, it’s the same feeling. The car working with every movement of my hands and input of my right foot. Every single moment of spirited driving in this McLaren is better than the one before it, and I’m high on the experience. Whether high atop a Tenerife mountain or echoing against the tall trees of southeast Michigan, this car brings its A-game.

Driving this car is an experience that’s far more impressive than hard data might suggest.

Believe what you’ve been told; the McLaren 570S is absolutely this year’s best driver’s car. More than anything else I’ve tested in 2016, the 570S brings with it a feeling of driver-and-car harmony that’s intoxicating in its level of envelopment. Driving this car is an experience that’s far more impressive than hard data might suggest.

That’s not to say the numbers on paper aren’t a joy to read. The 570S formula starts with McLaren’s well-known 3.8-liter biturbocharged V8, sending 562 horsepower and 443 pound-feet of torque to those fat rear tires. Off the line, McLaren says you’ll hit 60 miles per hour in a skoch over three seconds (which feels conservative, by the way), and if your private runway is long enough, you’ll see a top end of 204 mph. For comparison, the 570S is actually slightly quicker than the Audi R8 V10 Plus, despite having 48 fewer horsepower. Of course, the McLaren also has 677 fewer pounds to lug around than the all-wheel-drive Audi. It’s all about that power-to-weight factor, folks.

At 2,895 pounds (with all its optional carbon fiber bits – more on those later), the 570S is one seriously light car, considering its size and onboard power. But it’s so beautifully balanced that it never feels tough to control or like the engine’s output is too big for its britches. In fact, perhaps more than any other supercar, the McLaren has one of the broadest driving spectrums, from being totally comfortable when you’re just getting from A to B, to being an all-out, hunkered-down demon on the right roads.

The McLaren is totally comfortable when you’re just getting from A to B, yet it transforms into a hunkered-down demon on the right roads.

Credit the fully independent suspension and McLaren’s adaptive damping system. The car is totally amicable on lousy road surfaces like those on my commute to work, delivering a smooth, compliant ride. Long stretches of highway cruising won’t punish you, either. But turn the “handling” dial over to Sport or Track, and the personality totally changes. The 570S is flat as a pancake when cornering hard, but doesn’t skip and hop over sudden bumps. It is at once both firm and forgiving, the suspension doing as little as possible to upset the driver. Audi might use all-wheel drive with its R8, but the McLaren’s stiff chassis, grippy tires, and precise power delivery tactics make it so there’s never an ounce of back-end skittishness. This car just digs into the pavement and goes like hell.

Driving the McLaren is truly extraordinary, with a level of communication and fluidity that’s often lacking in modern cars. The steering is so, so direct, with appropriate weight and assured feedback at all times. The wheel is small in diameter and thick of rim, with not a single button or other control affixed to it. The huge, carbon fiber paddles mount to the column behind the wheel and provide a satisfying action as you snap through the lightning-quick seven-speed dual-clutch transmission. The engine behind you roars; the optional sports exhaust ($3,860 – woof) sounds like it’s shooting fire out the backside. And when it’s time to wind everything down, the standard carbon ceramic discs halt all activities with surefootedness, regardless of whether or not you decide to spend $1,060 to have them painted yellow.

Up and down the hills of my favorite roads, the 570S brings all of its passion and perfection to the forefront of the driving experience. The broken pavement and long, sweeping turns could be a race track – or those fine Tenerife roads – for all I care. On all accounts, the wondrous experience of the 570S shines through. It’s a goddamn masterpiece.

This car never fails to draw a crowd – and that’s before you open those rad dihedral doors.

That extends beyond the driving experience to a car that is both stunning to behold and a lovely place in which to work. The Vermillion Red ($4,150 – again, woof) exterior combines with carbon fiber accents here to create a two-tone work of art. Okay, maybe it’s not as reservedly handsome as an Audi R8 or as iconic as a Porsche 911 Turbo, but the 570S looks the part of a serious performer. If anything, it just looks… different. Everyone on the street either immediately knows it’s a McLaren, or they have no idea what it is. But one thing’s for sure, this car never fails to draw a crowd – and that’s before you open those rad dihedral doors.

Nestled inside the monocoque carbon fiber tub is an interior that’s understated in its design but lavish in its choice of materials. It’s all leather and carbon fiber and suede, with sparing amounts of plastic covering surfaces you don’t frequently touch. The red-and-black exterior theme carries inside, and nestled in the sport seats (not the fixed carbon fiber buckets, thank goodness), you’re firmly hugged and supported from behind the wheel.

Interior functions and controls are fine, with a digital display up front with different screens and menus on either side showing various data points or allowing you to adjust vehicle functions. McLaren’s vertically oriented infotainment display works like a tablet in terms of touching and scrolling, but it’s a bit confusing at first blush. Spend some time with it, like any system, and you’ll slowly become a pro. But none of the onboard technology looks or feels as advanced as Audi’s magical Virtual Cockpit. At least the standard Bowers & Wilkins sound system is rich and sweet.

The 570S is a stunning reminder of what’s capable in the world of involving driver’s cars.

Speaking of standard, I have to point out the generous level of onboard equipment – aforementioned things like premium audio, ceramic brakes, different drive mode settings, and Pirelli PZero Corsa tires are fitted to every single 570S. Of course, the car starts at $184,900, or about $20,000 more than an Audi R8 V10 Plus, so you’re right to expect that sort of spec. In terms of options, this test car comes with the previously detailed sports exhaust, special paint, and yellow brakes, and the absolutely necessary $1,500 vehicle lift kit, which allows you to electronically raise and lower the front end – a godsend for getting in and out of driveways. As for the $9,000 carbon fiber roof, $9,380 carbon fiber exterior pack, and $6,220 carbon fiber interior pack, those are niceties for press test cars, but not must-haves for daily use. Take those off, and the $229,100 as-tested price drops to $204,500, or only $4,300 more than the R8 I drove earlier this summer. And at the $200,000 level, an extra few thousand bucks seems like chump change for what you’re getting with the McLaren: one of the best-driving cars money can buy.

More than anything else, the 570S is a stunning reminder of what’s capable in the world of involving driver’s cars, and it’s easily the greatest car I’ve driven all year. McLaren’s least expensive (in the U.S., anyway) bookend is a no-sacrifice monster, and it’s a more interesting, more engaging choice than a comparable Audi R8, Lamborghini Huracan, or Porsche 911 Turbo.