Buick needed a right-priced box. It built a total package.

Want to know the best way to determine a brand’s health? Simply look at its range and variety of crossovers. Yes, as much as I don’t always like CUVs, a healthy lineup is vital to a brand’s long-term health. And in Buick's case, the miniature Encore and three-row Enclave only provide a portion of what a brand needs to conquer new customers. That's where the new Envision comes in.

Destined to be the meat-and-potatoes of Buick’s three-vehicle CUV lineup, the Envision’s price rubs up against the Encore on the south end and overlaps with the Enclave on the north end. But its size puts it squarely between its two siblings. The combination of these two qualities in a near-premium package gives increasingly crossover-hungry consumers another option in a wildly popular segment and opens Buick to new customers. But the Envision is much more than just a desirable price/size correlation. 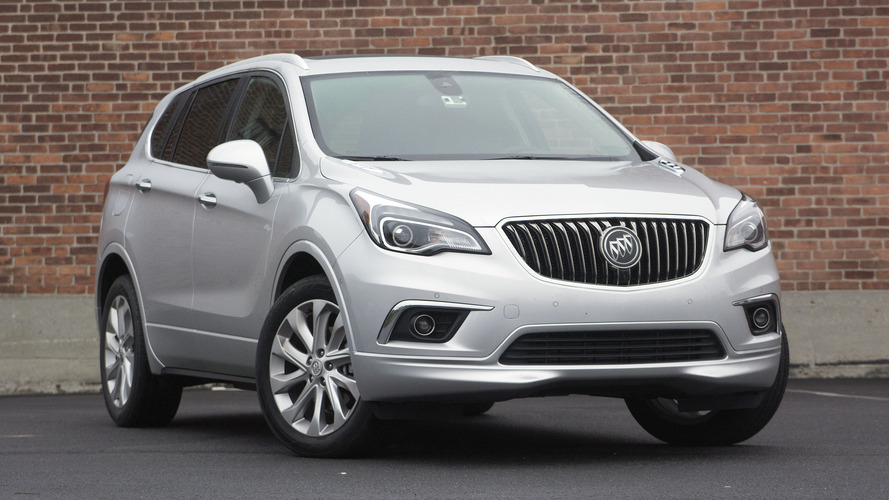 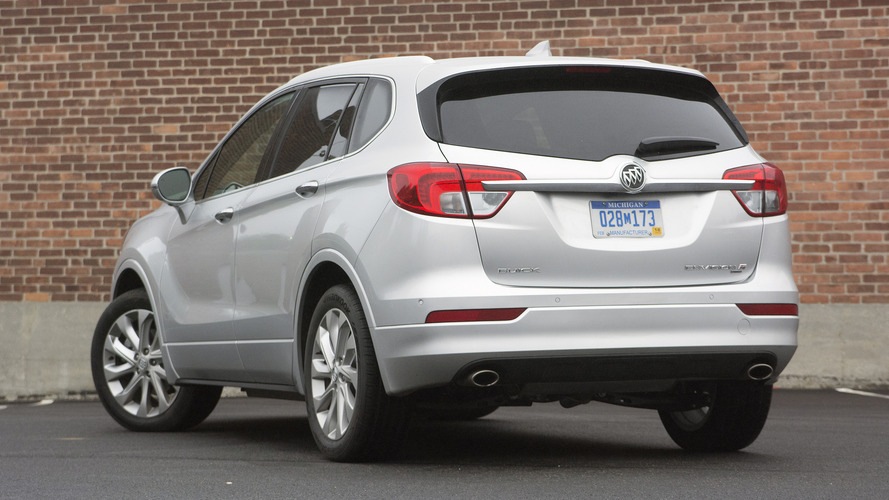 The Envision is much more than just a desirable price/size correlation.

It starts with a lovely cabin, loaded with varied materials and colors – big swaths of handsome (but fake) wood, piano black trim, leather, and plastic swoop and swirl across the dash creating modern and interesting shapes throughout the interior. Fit is excellent, too. But the cabin isn't perfect. Aside from some odd styling decisions – there is an outmoded analog clock that designers stuck it to right of the infotainment screen, far from the driver's line of sight – the cabin's layout is fashionable, with an eight-inch IntelliLink screen and, on certain models, a prominent display in the instrument cluster.

My biggest interior complaint focuses on the cramped second row. There's plenty of room for the long of leg and the broad of shoulder, but taller passengers will find their noggins brushing the headliner. While I recognize that the Envision will be popular with families, kids aren't the only ones that owners will toss in the backseat. If you're over six feet tall, I’d advise riding in front.

A 2.0-liter EcoTec four-cylinder with a twin-scroll turbocharger is now optional (it was the only available engine in 2016), with a new, 2.5-liter four-cylinder as the base. With 252 horsepower and 260 pound-feet of torque, the turbo is less powerful than the 301-hp, 272-lb-ft, 3.6-liter V6 featured in previous GM crossovers, like the Chevrolet Equinox and GMC Terrain. But the 2.0-liter is a more accessible engine, with peak torque showing up at just 2,000 rpm, compared to the V6's 4,800-rpm peak. 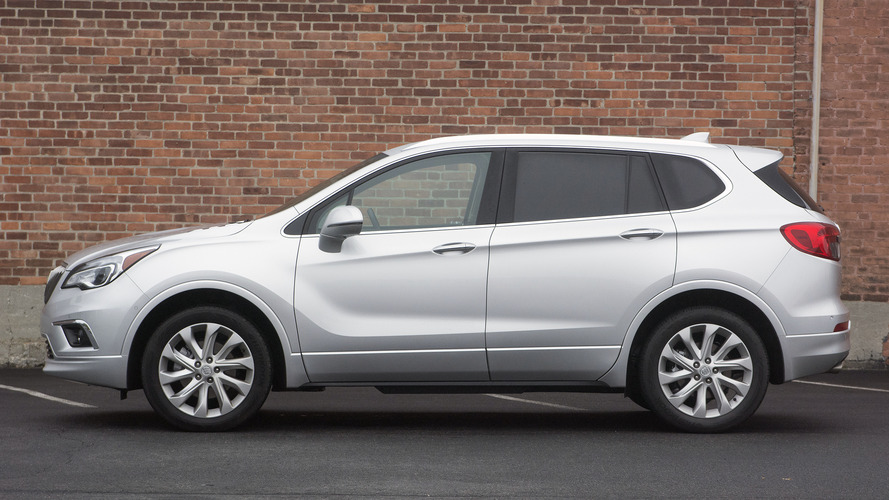 The Envision feels downright snappy off the line, with the 2.0-liter turbo providing a satisfying kick in the pants.

The result is more immediate and satisfying acceleration than anything you'll experience in the Equinox or Terrain. The Envision feels downright snappy off the line, with the 2.0-liter turbo providing a satisfying kick in the pants while V6 alternatives are still busy lacing their running shoes. At freeway speeds, too, the 2.0-liter's low torque peak proves valuable, allowing healthy passing speeds without forcing the transmission to drop to a lower gear.

The new 2.5-liter, meanwhile, is a big deal for Buick. The engine drives the Envison's price-of-entry down significantly – the turbo-only 2016 model started at $42,070, but the naturally aspirated 2017 kicks off at a more accessible $34,065. The 2.5-liter still represents a significant improvement over the old 2.4 GM relied on for a lot of Equinox and Terrain sales; the new engine makes 197 hp and 192 lb-ft of torque, compared to 182 hp and 174 lb-ft with the old engine.

The new 2.5 feels solid on the road. The torque peak, like what you might experience for a sudden freeway pass, is healthy, although it's hard to get behind the 2.5-liter's sluggish around town performance. Lincoln, Audi, and Acura – brands that Buick's PR team name-dropped during my testing – all offer significantly more power in the base engines for the MKC, Q5, and RDX. 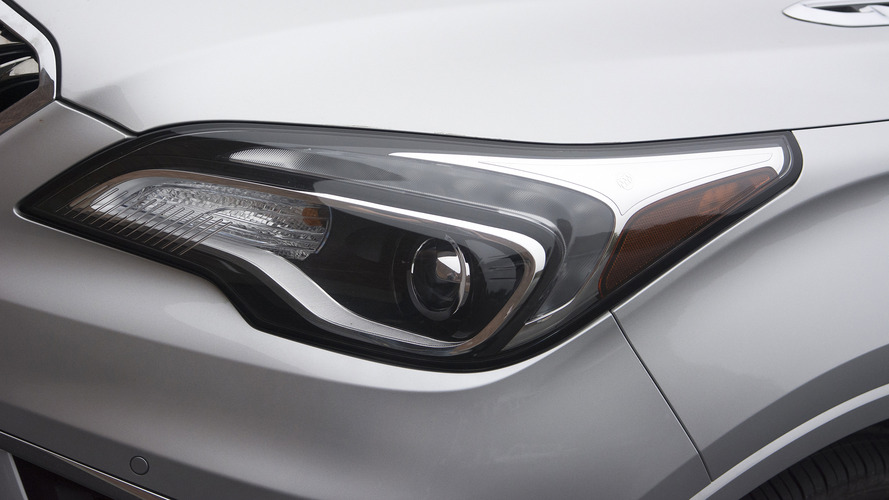 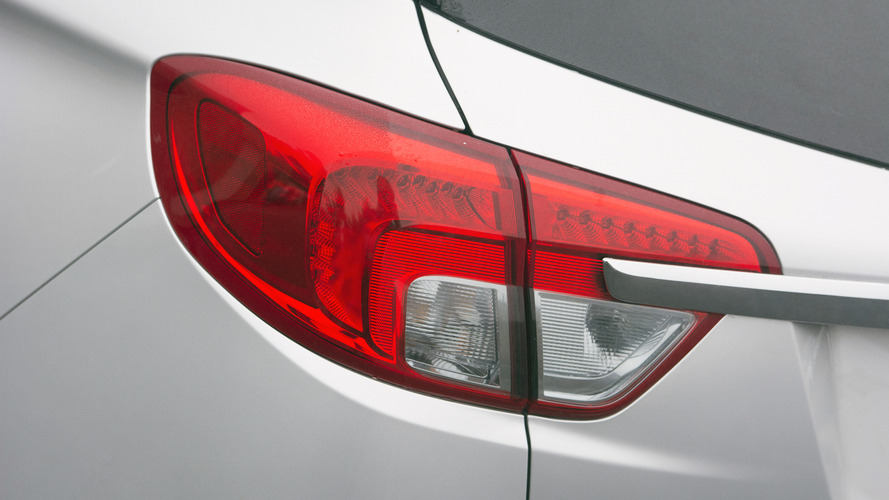 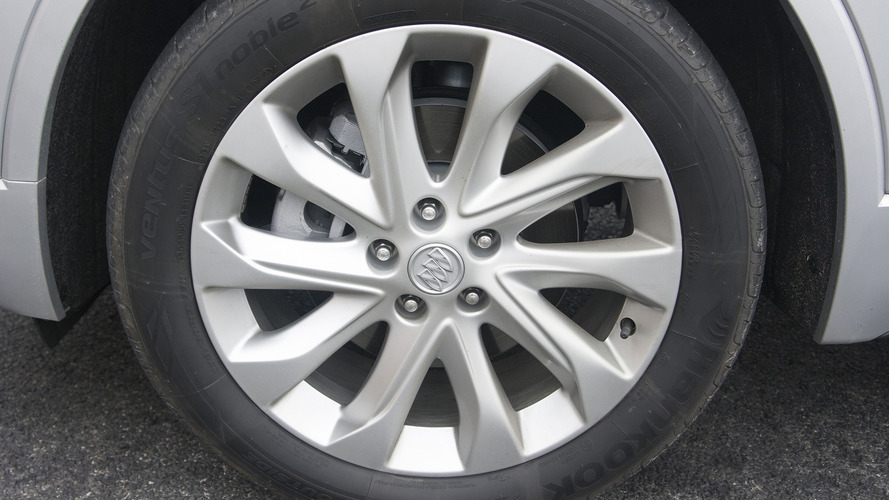 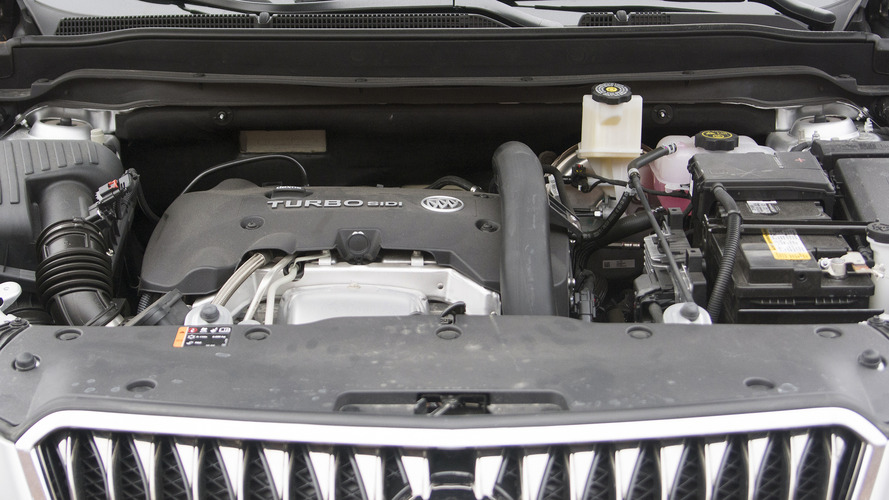 Lincoln, Audi, and Acura – brands that Buick's PR team name-dropped during my testing – all offer significantly more power in the base engines for the MKC, Q5, and RDX.

While Buick pushed ahead with new engines, it relies on old GM transmissions, using the same Hydra-Matic six-speed autos offered in both the four- and six-cylinder Terrain and Equinox. Their relaxed behavior is well suited to the Envision's brief as a luxury crossover, but compared to the quicker-shifting options at Audi and the advanced nine-speed auto coming with the 2018 Equinox's 2.0-liter turbo, I’m just a smidge disappointed by this kind of parts-bin hardware.

Picking the 2.5-liter Envision also forces owners to abandon a few very nice hardware tweaks. For one, Buick's excellent HiPer Strut front suspension is exclusive to the 2.0-liter turbocharged model – the base engine relies on a more standard MacPherson strut setup. While the HiPer Strut is there to suppress torque steer – something the 2.5-liter four-cylinder just isn't capable of producing – it isolates the Envision's all-electric power-steering. The result, at least in the turbo model, is like slapping a comfy pair of loafers on the front suspension, providing a calm, relaxed steering sensation at speed. That said, the Envision's steering, regardless of model, is too light on center – it weights up fine – and too slow in general. 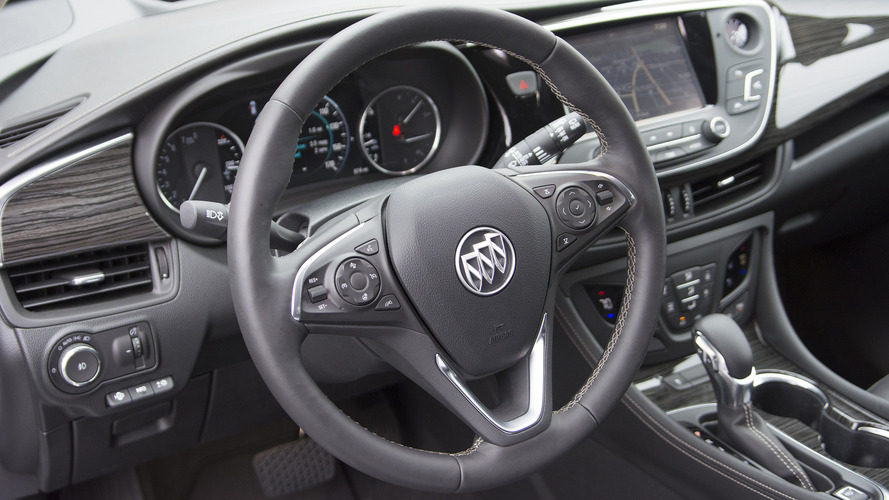 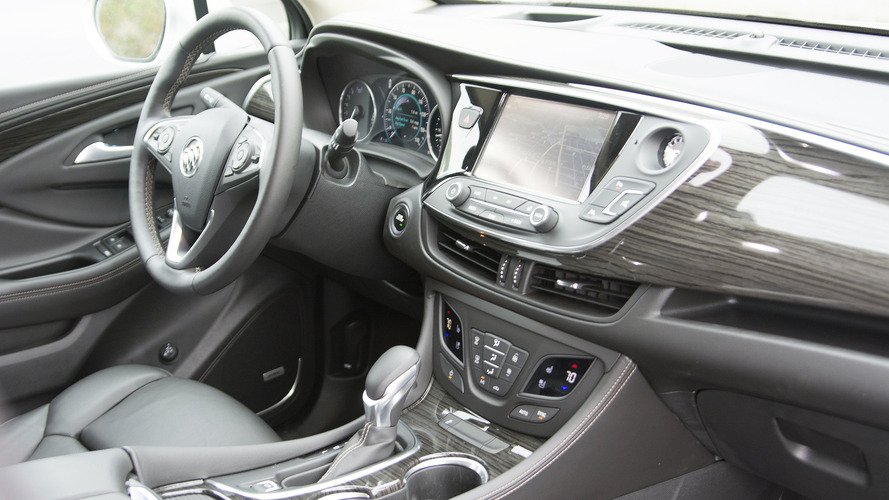 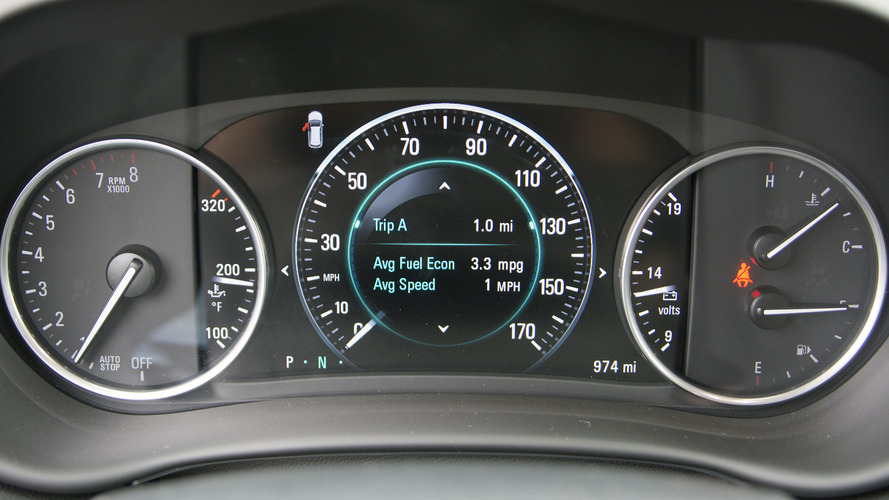 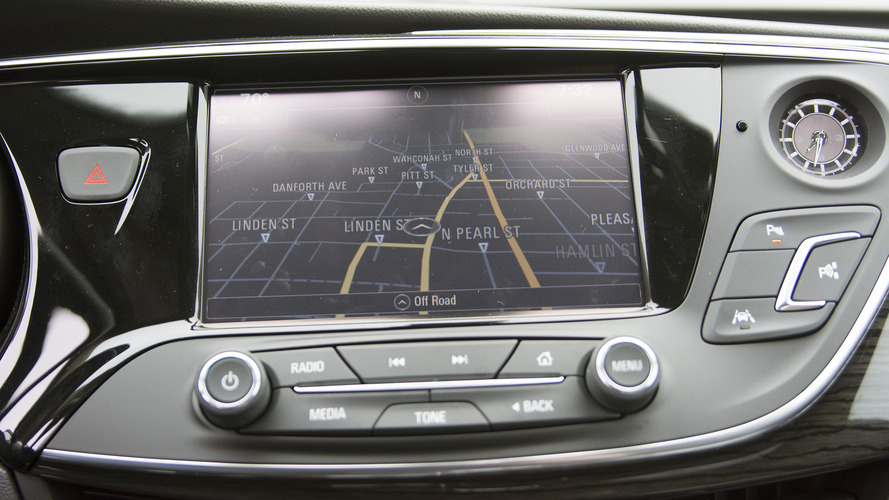 Even with the 20-inch wheels on my test car, the compact Buick has no problems smoothing out bumpy roads.

The other big loss that comes with selecting the base engine focuses on how the power is delivered. While Buick is selling both engines with all-wheel drive, only the 2.0-liter, turbocharged models get GM's new Twin Clutch AWD. The system, which GM sells on the LaCrosse sedan and Cadillac XT5 crossover, can transfer torque fore, aft, and even laterally on the rear axle, promising not only all-weather capability but more precise handling… In theory.

Look, if the Envision were an athlete, it wouldn't be a ballerina. This is still a high-riding, nearly 4,100-pound vehicle (with the Twin Clutch system) meant to focus on comfort and the handling reflects that. It rolls ponderously through turns, although the dampers are firm enough that squat and dive isn't disruptive. Still, paired with the slow steering, passengers shopping for five-seat crossovers regardless of price won't confuse Buick's new CUV with a Mazda CX-5.

And that's fine, because the Envision is really comfortable. Even with the 20-inch wheels on my test car, the compact Buick has no problems smoothing out bumpy roads. The same damper control that limits squat and dive does double duty providing a surprisingly pinned-down character on undulating surfaces and over crests, too. Of course, automakers are notorious for hand-picking smooth surfaces on these launch programs, but a trip down Detroit's worst surfaces should confirm my positive experiences in the northeastern U.S. 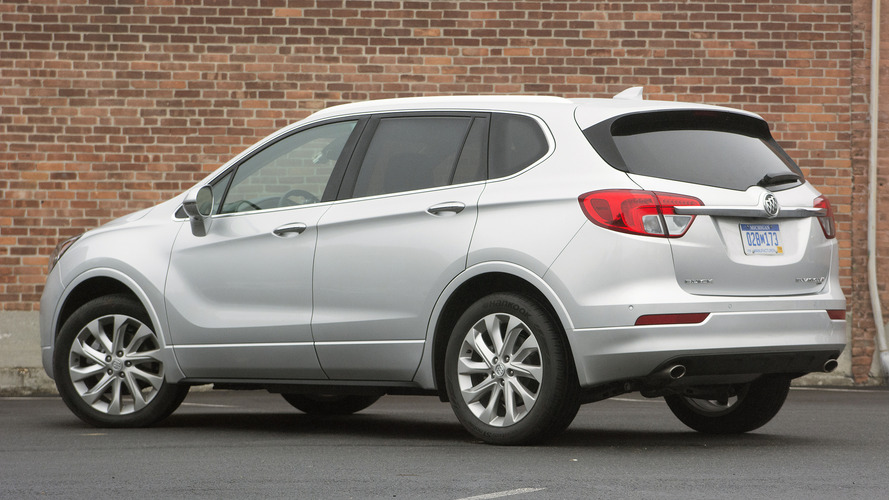 The Envision is the right vehicle at the right time for Buick.

What I don't need a local test to know, of course, is that the Envision is quiet. Like, spooky quiet. Buick's obsessive Quiet Tuning has crafted possibly the most tomb-like drive in the segment. Wind noise is hardly present, and engine noise, even in the buzzier 2.5-liter model, is really only noticeable under hard acceleration. The result is a truly serene drive – if you take a spin in the Envision, I recommend hitting the highway, turning off the HVAC and shutting down the radio, and basking in the silence.

The Envision is the right vehicle at the right time for Buick. That it’s an excellent balance of price and utility is good, but it’s the strides Buick made elsewhere that won’t only allow it to compete in the compact premium CUV segment, but thrive there. The handsome cabin looks great and the when fitted with the turbocharged powertrain, owners have a stout powerplant paired with an advanced all-wheel-drive system and front suspension to play with. This is a complete vehicle, and one that should help Buick gain ground against the Lincolns, Acuras, and Audis of the world.