Wrapping my head around this roomy sedan isn’t so hard after all.

I’ll admit that, heading to Virginia to drive the updated Kia Cadenza, I couldn’t help but think it was just a little weird. A Kia luxury vehicle seems a little bit like when that friend of yours who went bald in middle school, then got a bunch of tattoos, starts to class up his ensemble a bit by wearing long, black socks – with shorts.

To be fair, though, that same guy started buying really sharp suits before any of your other peers and, even though he’d wear them to college house parties a little too often, he really kind of rocked the look. He even made bald look cultivated and a little badass, especially when the jacket came off to reveal the tats.

And that’s Russ Kia, in a nutshell. 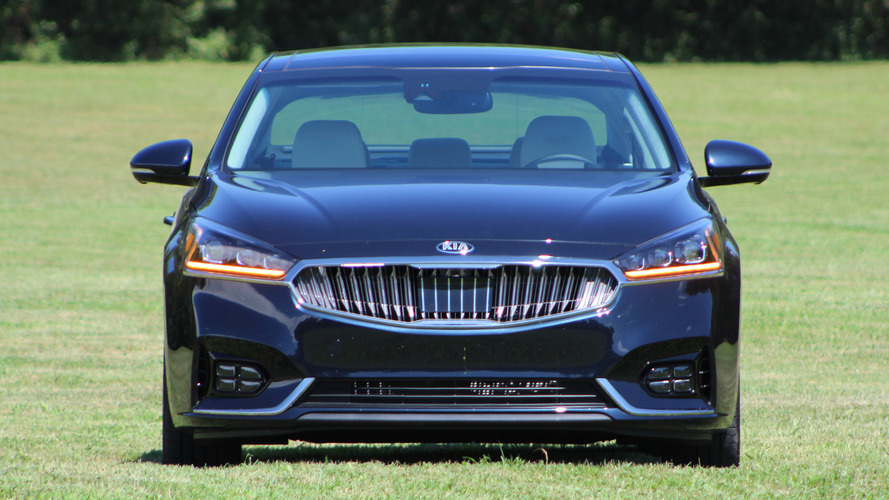 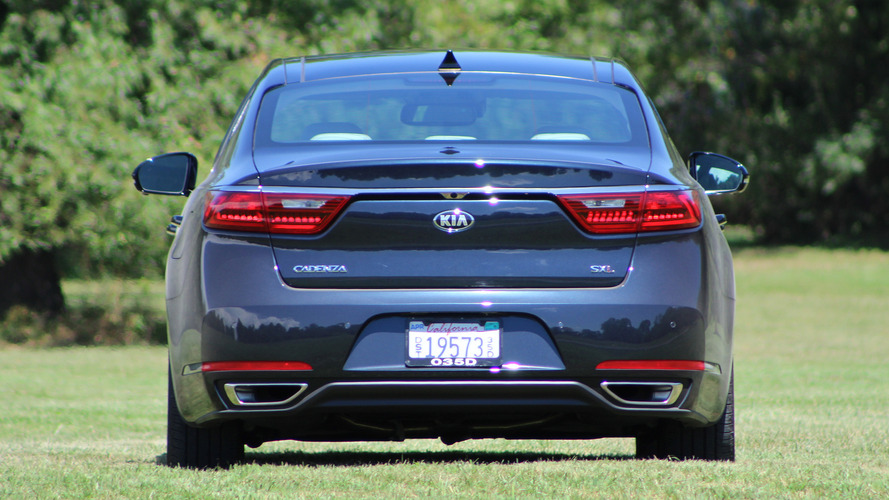 Since its 2013 introduction, Kia has sold just 28,000 Cadenzas, begging the question of the reasons for the model’s continued existence.

Since its U.S. launch in 1994, Kia admits that it has had some growing pains. In particular, its last-place ranking in J.D. Power’s Initial Quality Study in 2001 stung a bit. The brand was still trying to find its own identity, and has made strides since then with a dedicated design studio separate from Hyundai, an expanded model range, prestigious sponsorships, and, of course, those damned hamsters.

Now, Kia is offering some more mature options, with its Cadenza and K900 sedans, the former being our reason for traveling to the town of Middleburg in Virginia’s horse country. At dinner the night before the drive, George Washington and Thomas Jefferson impersonators mingled with the motoring press alongside Kia engineering, design, and product specialists to answer any questions we had about the Cadenza or American history. For whatever reason, I didn’t ask what dead statesmen and (living) horses had to do with the 2017 Cadenza, but it set an interesting tone for the rest of the trip. Also, George Washington is a super funny guy. Great teeth, too.

Surely, you can’t fault me for thinking the Cadenza a little weird, as a subdued, mature counterpart to its more youthful, daring, popular stablemates (hey, look at that, a super tangential horse metaphor – maybe Kia is onto something). Since its 2013 introduction, Kia has sold just 28,000 Cadenzas, begging the question of the reasons for the model’s continued existence. 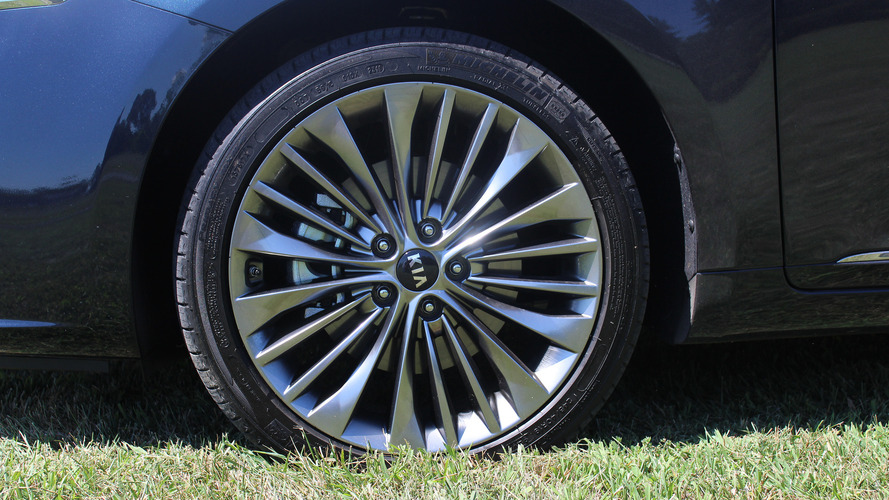 The Cadenza is meant to “showcase refinement and maturity,” analogous to “a nice tailored suit.”

At least that question was somewhat satisfactorily answered on drive day. From what Kia was telling us, the car serves as a sort of “stepping stone” or “bridge” (Kia’s words) between the Optima and the K900. With a 290-horsepower V6 (actually down three ponies from the outgoing model) underhood and generous back-seat space, Kia is targeting what it calls “traditional” buyers, who want a big, front-wheel-drive sedan that can cart grandkids and business clients alike. It’s clear the company wants to gain footing in the sedan and luxury markets, and that it expects to continue to open new doors once it gets its foot in them. Of those 28,000 Cadenza owners, too, Kia has managed to retain 61 percent. Improvements in the car’s stability, safety, and standard offerings will likely attract more.

The car’s principal exterior designer, Ray Ng, tells us he, “wanted to design something my dad would feel cool in, but that I wouldn’t mind driving myself.” The Cadenza is meant to “showcase refinement and maturity,” analogous to (and these are his actual words) “a nice tailored suit.” And, like those suits your bald friend wore all the time, this offers a fair semblance of luxury without breaking the bank.

In the flesh, the Cadenza doesn’t stand out so much at most angles, at least from the outside and especially in traffic. Like so many suited men at a trade show, the Cadenza more or less blends in – I definitely couldn’t picture an anthropomorphic hamster behind the wheel. Still, I inherently liked the cut of its jib. It’s visually simple and tidy with little, save the concave grille, to either intensely fetch or repel. Its proportions are classically handsome, with a long hood, sharply raked windshield, and sleek roofline giving a whiff of machismo; definitely more of the tailored, suave variety than meat-sweaty bravado. 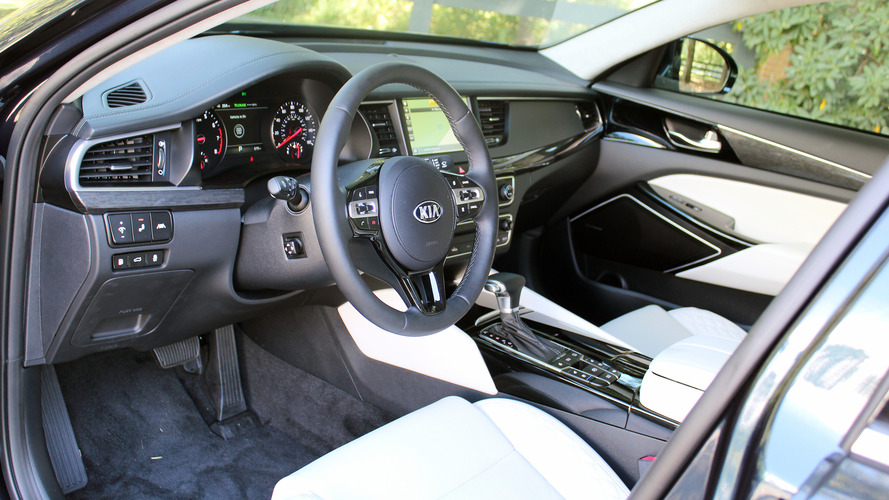 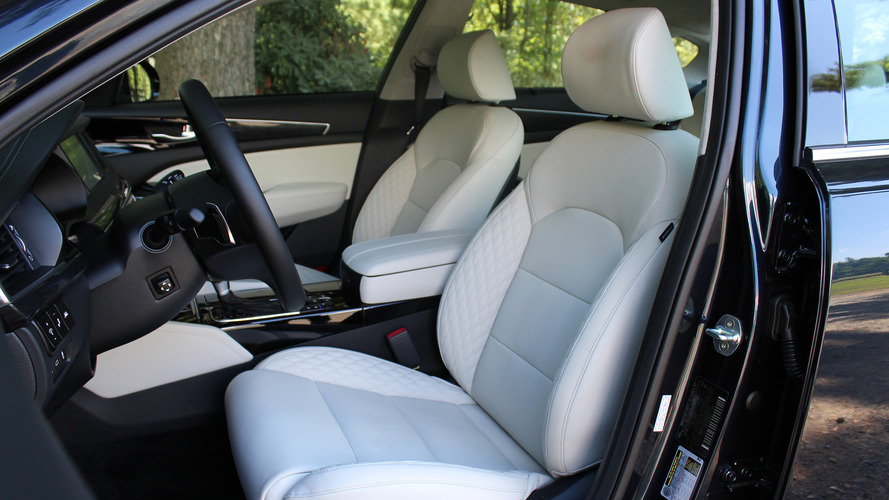 Once I sat inside the cabin of the Cadenza, I quickly forgot any previous reservations I had about the car. I was instantly comfortable, with lots of leg, hip, and shoulder room. The panoramic sunroof in this range-topping tester helped add to this sense of openness. Agoraphobics, beware: the interior feels truly expansive.

Materials appear to be of high quality, with every touch point having a soft or smooth or at least moderately weighty feel to it. Nappa leather, microfiber, and glossy plastics are placed strategically. That said, the interior is not overwrought. The mile-wide dash is refreshingly uncluttered. Clean, straight lines offer a mature, professional vibe to the Cadenza’s cabin – a deliberate move on Kia’s part, and a bullseye in its execution. I was already certain I’d be perfectly happy living inside this car for longer than the several hours I’d get to drive it around horse country. Plus, the air conditioning and ventilated seats were the perfect antidote to the heavy summer air. Giddy up.

Keeping one eye on my speedometer and the other on the road ahead to spot any of the many reported police, I took the opportunity to put the pedal to the ground. While the speedo needle didn’t appear to climb all too quickly, the Cadenza sang a fine tune in its masculine voice as it reached a highway canter, helping to at least provide an enjoyable sense of speed to it. The transmission works well in tandem with the motor, switching through its eight gears (two more than the outgoing model) with a smoothness that masks its existence. 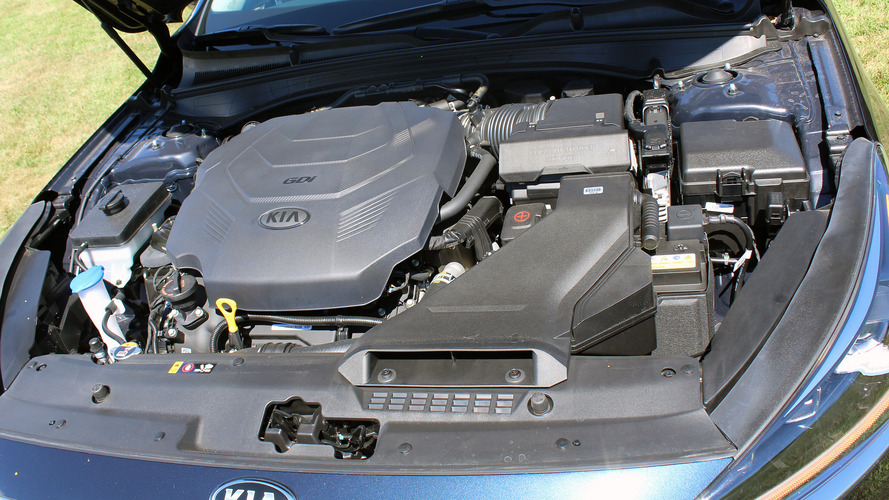 The steering gives almost no sense of feedback, so you kind of have to fly by the seat of your pants.

Once off the highway, and after a second breakfast of cheese in Rappahannock County, the drive route headed up into the hills of Shenandoah. Climbing the blind corners, I felt myself sliding around in the wide seats a bit, but the car seemed composed. Really tight corners of decreasing radius, though, ate up some of the momentum, and it was clear the Cadenza isn’t a track car when I dug back into the accelerator to make up for it.

“So what?” I thought, as the Cadenza carried itself back up to speed with leisurely smoothness. Exactly the sort of shrugging/smirking response that aforementioned foppish friend would give when one of us would razz him for dressing up to go drink Cutty Sark at a dive bar. (Touché, Russ.)

Not surprisingly, the steering gives almost no sense of feedback, so you kind of have to fly by the seat of your pants. Sport mode definitely tightens up the steering, which makes it a little easier to saw back and forth. More surprisingly, Sport mode especially shined on straight highways. It makes the Cadenza feel a lot pointier, which makes it intuitively easier to avoid drifting out of your lane. Relaxed cruising was actually even less stressful, and therefore more comfortable, in Sport mode than in Comfort or Eco. 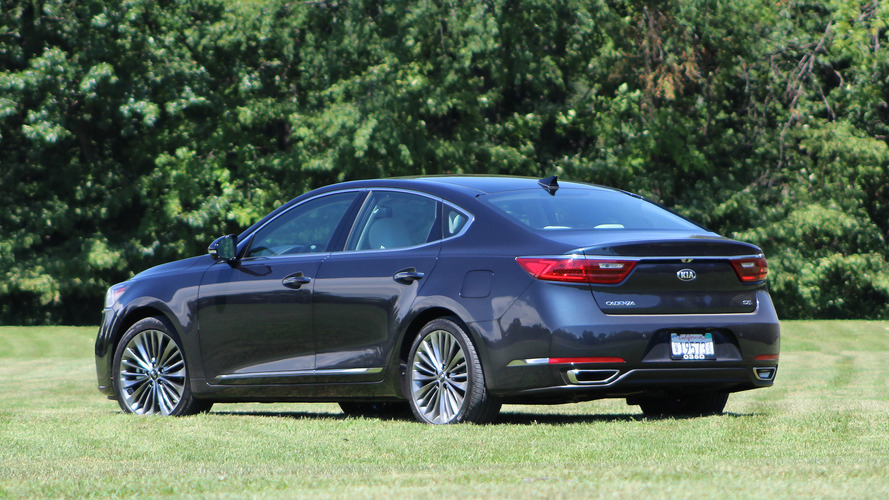 I could have comfortably driven, or dozed in the business-class back seat, for another couple hundred miles.

Braking is immediately responsive. When you get on the pedal, it’s almost as if the car is predicting your move and starts braking for you (something that it actually can do in emergency situations). As instantaneous as it is, it’s not grabby, and you’re not likely to accidentally put your passengers into their shoulder harnesses.

While simultaneously keeping an eye out for cops, stuff that doesn’t belong in the road, and a Wawa station at which to grab a potential third breakfast (I did end up spotting one, but reluctantly passed it up), overall visibility is great in the Cadenza. Forward sight lines are optimal, with a wide view of the road in front of you and good angles to get a sense of what is to either side. That hood looks mercifully shorter from the cockpit. The only obstructed view is through the back window, but it’s ample for everyday driving. In tighter spaces (those Wawa lots can get crowded), the robust camera suite helps sort out where you’re placing the Cadenza.

A quick lunch and sweet tea was followed by many more miles of narrow, winding roads and plenty of highways as I made my way back to Middleburg. I could have comfortably driven, or dozed in the business-class back seat, for another couple hundred miles.

Afterward, Kia personnel and automotive press reconvened for an equestrian dressage performance by U.S. Olympic reserve rider Lynn Symansky and her steed Cooley Cruise Control. Unfortunately, George Washington was nowhere to be found. Sweating in the sticky heat, I was glad I decided not to wear a suit, but I missed the ventilated saddle of the Cadenza.