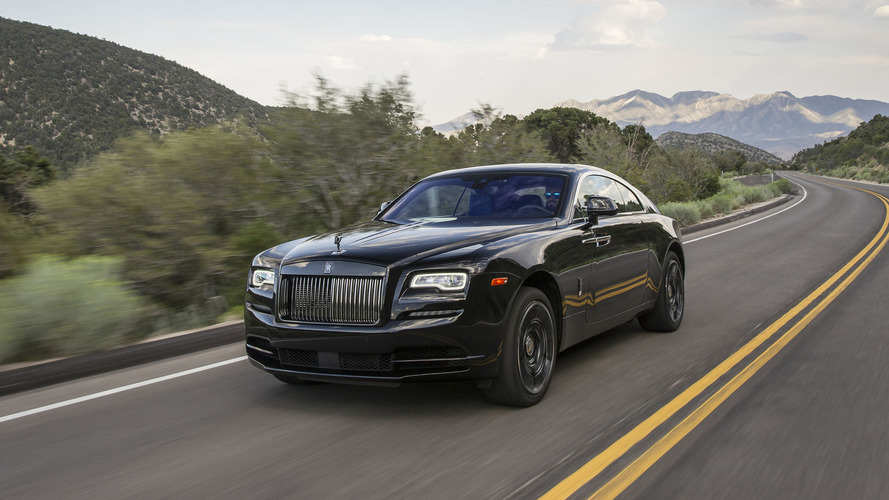 When your album hits the big time, this is the car you’ll buy.

Driving a Rolls-Royce usually evokes verbs like “waft” and “glide.” So why am I doing 110 miles per hour on a race track in a Rolls-Royce Wraith Black Badge?

The Black Badge is not your typical Rolls-Royce Wraith, as evidenced by the fact the British marque dared let journalists loose in the cars at SpeedVegas, a new 1.5-mile track just south of Sin City. This special edition Wraith is supposed to be a little sportier and edgier, the type of Rolls that will draw new-money clientele – stock traders, celebrities, athletes, etc. – to a brand sometimes seen as only for stodgy old people. But while engineers did work to improve the Wraith’s dynamic prowess, much of the Black Badge treatment (which is also available for the Ghost four-door) concerns how the car looks.

Rolls-Royce officials say they kept seeing actual buyers modifying their cars in the aftermarket with blacked-out trim, dark wheels, and tinted windows. So the Black Badge takes the same approach, eschewing shiny chrome wherever possible. The badges have silver script on a black background instead of the normal reverse color scheme. The Spirit of Ecstasy sculpture perched atop the radiator is also now black, a first for any factory Rolls. The exhaust outlets are painted black, too, and new 21-inch wheels are partially constructed of carbon fiber, continuing the black-and-silver color scheme.

The Spirit of Ecstasy sculpture perched atop the radiator is also now black, a first for any factory Rolls.

“The essence of this car is reducing the amount of brightwork and making a statement with that,” says Rolls-Royce director of design Giles Taylor.

Move inside and Black Badge cars get gloss-covered carbon-fiber trim pieces with tiny horizontal threads of aluminum that sparkle in the sunlight, while the instruments and clock have orange-tipped needles. There are also abundant “Unlimited” logos – an infinity symbol above a horizontal line – evoking the insurance rating that was given to racing boats powered by Rolls-Royce engines in the 1930s. It’s an obscure reference if ever there was one. Regardless, the Black Badge treatment looks downright mean on both the two-door Wraith I drove and the four-door Ghosts that shuttled me along the Strip. Were I lucky enough to buy a Rolls-Royce, I’d want it to look like this.

Yet Rolls-Royce is adamant that the Black Badge enhancement goes beyond aesthetics. The aforementioned new wheels, for instance, are 2.2 pounds lighter each than the regular rolling stock. The air suspension and active anti-roll system have been reprogrammed for sportier response through corners, the electric power steering retuned, and the front brake discs enlarged by one inch in diameter. The goal was not to make a supercar or a track star, say engineers, but to elicit just a bit more fun from behind the wheel.

Lapping SpeedVegas, the most notable change is new logic for the eight-speed automatic transmission.

Extra boost from the two turbochargers helps the 6.6-liter V12 engine make an additional 52 pound-feet of torque, for a total of 642 lb-ft, while horsepower is unchanged at 624. Despite the extra grunt, the Wraith’s quoted 0-60 time doesn’t change from 4.4 seconds, and nor probably will its EPA fuel economy ratings of 13 miles per gallon city, 21 highway.

Lapping SpeedVegas, the most notable change is new logic for the eight-speed automatic transmission. In the Black Badge cars, it upshifts 300-500 rpm later than usual, and above 80 percent throttle it will hold gears all the way to the 6,000-rpm redline. Use the “Low” button on the dainty shift stalk (a “sport” mode would be unbecoming in a Rolls) and the gearbox also kicks down earlier, and both up- and downshifts become significantly quicker and more aggressive.

The key result is the ability to make the most of the biturbo engine’s tsunami wave of torque at all times – no shift paddles needed or offered. The Wraith is a sledgehammer between corners and easily reaches triple digits on the track’s short front straight, and I’m relieved the upgraded front brakes can counter the car’s prodigious inertia.

The Wraith is a sledgehammer between corners and easily reaches triple digits on the track’s short front straight.

As to handling, well, it’s still a Rolls-Royce. The Wraith Black Badge has ultra-light steering and an incredibly compliant ride, but it does corner just a little bit more eagerly than the standard version. Notably, it settles quickly during transitions, whether on or off the brakes or throttle, or when straightening up after a fast corner; Chevy Camaro it ain’t, but you should leave your cliches about boat-like wallowing body roll behind. It’s also a relief that the numb, dead on-center feel I recall from a standard Wraith has been eliminated. The steering gear itself is unchanged, but new electric-assist software makes a big difference.

On public roads, the driving impression is likewise Rolls-Royce first, Black Badge second. At an 80-mph cruise on US-95 outside Las Vegas, the Wraith is as serene as a stationary living room. There’s no indication that the road is anything but perfectly smooth, or that there’s any noise at all coming from other vehicles. Really, the only prominent sound is the whoosh of the air conditioning as it battles the 110-degree ambient temperature. This is all good news: Rolls-Royce hasn’t ruined the Wraith’s “magic carpet ride” suppleness or library-like quietness in search of sportiness.

Turning off the freeway and climbing up toward Mount Charleston, the V12 and eight-speed automatic pull mightily even as I pass a sign indicating 8,437 feet of elevation. The summer tires cling on as the road sweeps back and forth, the steering impeccably smooth and, befitting a Rolls, devoid of any untoward information about what the front tires are actually doing. Yet the air suspension stays sorted and settled, so there’s no worrying sensation that the Wraith is listing over on its sides. Pushing through the winding pseudo-hillclimb is satisfying if not adrenaline-pumping; there’s no sense that the Wraith can’t hustle a little on these roads.

The Black Badge is squarely toward the plush side of the comfort-performance continuum, making driving easy and pleasant before all else.

And yet, a Bentley Continental GT Speed or Mercedes-AMG S65 Coupe this is not. The Black Badge is squarely toward the plush side of the comfort-performance continuum, making driving easy and pleasant before all else. It’s for the Wraith owner who wants to press on a bit on the way home from the golf course, not the enthusiast driver who wants to worry a Porsche 911 on a canyon road. It’s fun to drive but also incredibly plush and calm.

That’s probably a smart way to position this car. Even with all the Black Badge tuning, the Rolls-Royce Wraith remains stupendously quiet, comfortable, and relaxing – all the things that inspire someone to spend $350,000 for a Wraith (that’s compared to $308,800 for the standard car). But it’s silly to assume the customers Rolls describes as “young, self-empowered, self-confident rule-breakers” will be seduced by the promise of extra torque and tauter chassis tuning. They’ll just see the Black Badge cars and think they look cool.