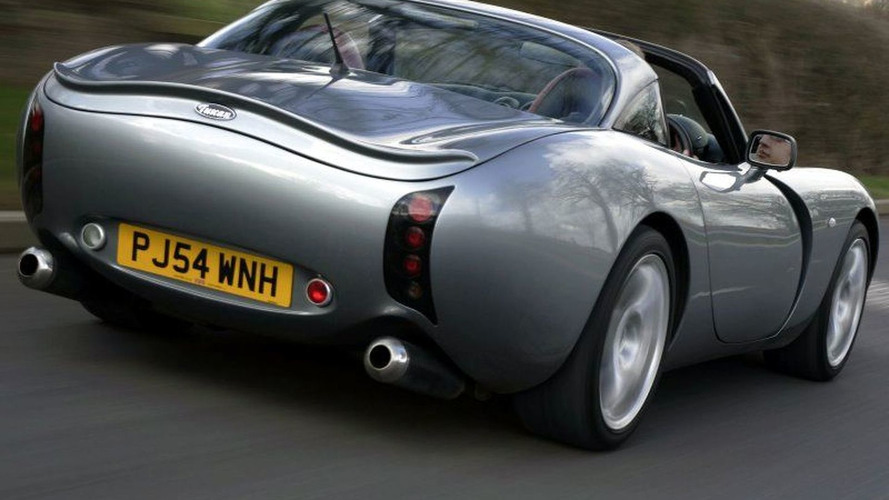 Effectively the superbike of the four-wheeled world, a TVR is a hairy-chested plaything for those with the disposable income to spend more than £40,000 on their leisure time. It's a weekend toy, but it beats the Hell out of a Playstatio

Effectively the superbike of the four-wheeled world, a TVR is a hairy-chested plaything for those with the disposable income to spend more than £40,000 on their leisure time. It’s a weekend toy, but it beats the Hell out of a Playstation.

Blackpool-based TVR has always had a simple goal: supercar power and muscle car attitude at less than half the cost of a serious Porsche or Ferrari.

To purchase one is to buy into a culture of opposite lock, powerslides and blasting down winding, traffic-free roads late at night with wide-open eyes and sweaty palms. They’re hard to drive and demand respect, and the never-ending appeal lies in the challenge. Owning a TVR could be like climbing Everest every time you leave the garage: it’s no easy thrill.

The exterior styling epitomises the brutal character of the car, with muscular bulges fore and aft. Looney Tunes used an S version for the animated film Back in Action and the cartoon rockets hardly looked out of place on this bohemoth’s flanks.

Not everyone will love the in your face styling, but TVR has never been about the masses. These cars appeal to a niche, a hardy bunch that crave an expression of their thirst for driving. It has to be said that almost everything looks ordinary next to this carbon-fibre creation and that aerodynamic front end is yet another example of a novel approach. It takes wrenches to get to the engine, but the fixed fibreglass panel is a stressed member and contributes to the overall stiffness.

Every swooping carbon-fibre panel is unique, special, a grand occasion. Most cars have an element of something else, a hint of another manufacturer about them in a certain light, influences from the world around them. TVR doesn’t follow trends, it’s the automotive twilight zone where nothing is as it seems.

Even getting into the Tuscan 2 is a special experience, there aren’t any locks and a keyfob combines with a discreet button under the mirror to pop the door open for another thrill ride.

Changes from the original include fared in headlights to further reduce drag at the front end, a lower spoiler and light clusters that now fit flush at the rear. They’re minor tweaks, but the Tuscan is so far ahead of its time it hardly needs a major facelift and the changes are purely for the added performance.

Any production TVR could have rolled out of the most extravagant design studios in the world, and the tactile and beautiful finish of even the smallest details are unique.

Even Ferraris use plastic Fiat components, but the interior of a TVR is automotive sculpture. Extravagant swathes of leather combine with all-enveloping seats and machined aluminium switches that work in their own unique fashion. It took hours to figure out the indicators, fans and dashboard - a scrolling electronic readout that offers more information than the average F1 team would require – but it was worth every minute.

Despite the high-tech dash, TVRs are still produced by hand and the engine bears the initials of the man who assembled it. This is a true cottage industry, but that’s about to change as TVR is going global.

The automotive industry now has its own Roman Abramovich, maverick young Russian Nikolai Smolenski who had run a national bank, officially become Russia’s youngest millionaire and then shelled out a rumoured £15 million for his own sportscar company.

His first act was to cease production while they ironed out reliability problems that TVR has a less enviable reputation for. Too many TVR owners have tales of standing by the side of the road at 3am, waiting for the recovery truck. Now each car will come with a three-year warranty, which is almost unheard of in the sportscar world, and it’s a brave statement of intent.

Smolenski has big plans for the small company that has just a few select partners importing cars around Europe. First his sights are set on his homeland and the US leisure car market hasn’t escaped his attentions. The Russian has to civilise his cars first, though, because owning an early TVR was like snake handling. It may be an opening to a whole new spiritual world, but it can also kill with a single bite.

Difficult to drive doesn’t quite cover it, a TVR was always a lapse in concentration away from meeting a wall and accident repair was a lucrative sideline for the major dealers. That had to change.

A devoted following of British lunatics that dine on nails and broken glass and are prepared to go to hospital every time they leave the house just wasn’t enough to hit this new man’s targets. So the Blackpool company, for the first time in its history, has softened the edges on the new Tuscan 2.

Soft is a relative term, though, think being hit with a baseball bat rather than a car. The 3.6-litre inline Six cylinder, that kicks out 350bhp through the rear wheels, is the tamest powerplant in the TVR line-up. The four-litre Tuscan S and Sagaris both manage 400bhp and both are thugs, but this car is more than enough for most of us.

It hammers to 60mph in a spine-distorting 4.4s and tops out somewhere on the dark side of180mph after exhausting the five-speed gearbox. But the numbers don’t do justice to the sheer violence involved, as there is no traction control, the blaring noise permeates through every part of the cabin and every rut and imperfection in the tarmac resonates back through the steering wheel.

Drive for hours in this car and you will feel pain as it bounces off every rut and rolls every rev around the cabin. Sound insulation adds weight, a natural enemy of this machine, so TVR did without most of it and that means its loud, like Spinal Tap turned up to 11. It’s impossible not to laugh when driving this car, but on a long trek blood would gush from your ears.

The monumental speed comes thanks to the willingness of that engine and the lightweight design. Despite the opulent interior the Tuscan 2 tips the scales at just 1100kg. A lightweight space frame chassis and stiff suspension honed with years of motorsport involvement keeps bodyroll from the equation and with so little weight dragging on the tyres in the corners this car has the potential to change direction like a cornered politician.

Driving this car in isolation it’s hard to believe it’s a softer version of the Tuscan Mk1, but the engineers have relaxed the front end a little to file down the teeth on this jagged blade. When pushing hard it’s still vital to stay smooth to get the best from this basic and aggressively tuned chassis and if you don’t respect it can bite hard.

Virtually every manufacturer, even the likes of Porsche, dial a certain amount of understeer into their chassis as this helps prevent spins that can kill the customer. TVR has resisted this trend, though, and insists on producing pin-sharp cars that retain all of the hard-edged character of supercars of the old world. It cuts into bends faster than almost any car on the market, therefore, but go in too fast and the back end will still snap out of line and swing round faster than you ever imagined possible.

It sent me into a sideways half-spin during my test, but it’s still easier to handle than the original Tuscan. TVR has only trimmed the Tuscan’s claws a little, but it could be just about enough for those bored of their Porsche Boxster.

Unlike other sportscars the Tuscan 2 doesn’t just go fast. It provides thrills at all speeds and all the tools to achieve the speed, but you’ll really have to learn its nuances to unlock this car’s potential.

It demands total focus, all of the time, it just won’t do the driving for you. But on a dry day it will eat other roadsters for breakfast and provide all the hairy chested weekend fun you can handle.