The RDX makes gains in the compact luxury crossover space to better compete with Audi and BMW.

If it ain't broke, don't fix it. That's likely what Acura told its engineers and designers as the company set out to refresh the RDX for the 2022 model year. Only keen eyes should be able to point out the exterior updates, while good listeners will appreciate the improved cabin experience. And for all the tech-heads out there, some new features finally bring the RDX up to speed.

But the RDX is technically Acura's oldest model, despite a 2019 redesign. So while the rest of the lineup has been more significantly updated or introduced more recently, there are a few lingering things that keep the RDX from feeling as modern as the TLX or MDX – even post-update. But that’s not to say this isn’t still a solid crossover, all things considered.

Acura made significant changes to the RDX's sound deadening for 2022. The engine now idles at 950 RPM, as opposed to 1,000. A new front fender liner reduces vibrations, and an enhanced Active Sound Control system keeps as much noise out of the cabin as possible.

With the Technology package tested here, the RDX also gets thicker carpeting, a new sound insulator for the front doors, and acoustic glass. The results are noticeable; the RDX is less buzzy around town and the cabin is better insulated from unwanted wind, road, and tire noise. Even at highway speeds, you'll be able to speak at a whisper.

Although it’s hard to tell, the refreshed RDX does indeed have a cleaner look overall. The most noticeable changes are on the front bumper. There are smaller, subtler air intakes than before, a slightly wider Diamond Pentagon grille, and smoother features – a la the larger MDX. And it all works.

With the A-Spec package equipped, gloss black accents surround the grille, window sills, mirrors, and elsewhere – just as before. But on the new-for-2022 A-Spec Advance model, there's a set of 20-inch Shark Gray rims and LED puddle lights that illuminate the pavement when you open the door.

No need to plug in – wireless Apple CarPlay and Android Auto are now standard on the RDX for 2022. Simply connect your device one time via Bluetooth and the RDX automatically links to your phone every time you step in the car. It worked seamlessly and without issue during our test. 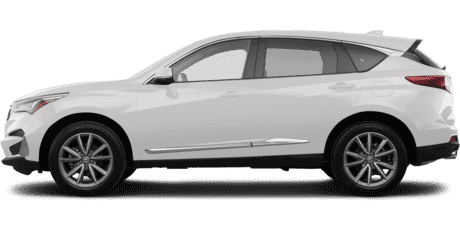 There is a downside to using CarPlay and Android Auto in the RDX: Acura's True Touchpad Interface (TTI) makes it hard to navigate. Whereas the TTI is relatively seamless when using Acura's baked-in infotainment, allowing you to select options on the screen wherever you place your fingers on the touchpad, that's not the case with CarPlay.

With CarPlay and Android Auto, the 10.2-inch screen (not a touchscreen) no longer reacts to where you place your fingers on the touchpad. You now have to scroll to each individual setting on CarPlay. This isn't necessarily Acura's fault – the automaker tells us that Apple hasn't formatted CarPlay for TTI – but it's a small annoyance nonetheless.

A 10.2-inch screen is standard in all versions of the RDX. Also standard? A fixed split-screen function that takes up a quarter of the right side of the screen. It allows you to display a clock, audio, and a bit more, but it's often repetitive, and it means you don't have access to the entirety of the 10.2 inches for other functions. Even when you are using CarPlay or Android Auto, the small box on the right-hand side of the screen never disappears.

This is a minor gripe all things considered, but it’s one more thing to look at while cross-shopping. With the larger MDX now sporting an optional digital instrument cluster – one we quite like – it’s a shame that tech didn’t trickle down to RDX with this update. Instead, the RDX has the same two traditional gauge clusters as last year, still surrounding a small 7.0-inch driver information display that’s not all that configurable. Even though this setup is still nice to look at, a bit more tech here would go a long way.

How Much Does The Acura RDX Cost?

Does The RDX Have A Six-Cylinder Engine?

No, the Acura RDX does not offer a V6 engine. The standard engine is a turbocharged 2.0-liter four-cylinder that produces 272 horsepower.

What’s Comparable To The Acura RDX?

The Acura RDX is a compact luxury SUV, which means it competes against alternatives from Audi, BMW, Mercedes-Benz, and more. Some of its direct competitors include the Audi Q5, the BMW X3, and the Mercedes-Benz GLC.