2022 Toyota Sienna Woodland Review: If You Wanna Be My Crossover

This lifted Sienna wants you to ditch your CUV and embrace the minivan.

There’s a not-so-small subsection of the auto community (to which I belong) that goes absolutely bonkers for minivans. It was our 1993 Dodge Grand Caravan that made me love these boxes on wheels. For our family of six, the Caravan was a huge upgrade from the Chevrolet Celebrity wagon we traded in – rear-seat climate controls, elbow room, and a built-in booster seat pour moi? I was in love.

Today’s customer isn’t so easily swayed, and the minivan’s styling – some dare to call these magnificent creatures uncool – is its greatest liability in the fight against three-row crossovers, as well as a perceived lack of rough-road capability. Toyota is here to change that with the 2022 Sienna Woodland Edition.

Based on the popular XLE trim level, the Woodland has standard all-wheel drive, 0.6 inches of added ground clearance, and a few cosmetic touches to turn the efficient, spacious hybrid minivan into a would-be crossover rival. Those willing to embrace the minivan life are going to love it.

The Toyota Sienna, redesigned for the 2021 model year, is one of the more exuberantly styled vans on the road today. Although it doesn’t avoid the short-hood, long-windshield pitfall that seems to drive consumers away from vans, the Sienna compensates with squinty headlights bookending the corporate jellybean logo. The large, trapezoidal grille on the bumper is undeniably bold, and Toyota designers get extra credit for hiding the fact that most of it is blocked off. The Woodland’s dark chrome exterior accents, trim-exclusive Cement paint color, and standard roof rails attracted at least one admiring glance from the neighbors.

The Sienna looks like it was shaped by the wind, with crisp rocker panel contours that rise dramatically toward the angular D-pillar. Stylists reportedly took inspiration from Japan’s Shinkansen bullet trains for the new minivan, and if you squint, you can sorta see it in the high, sloping hood and swept bodyside contours. Things start to fall apart on the rear end, which compensates for the rest of the Sienna’s smooth styling with an overabundance of angles, edges, and slashes. I do appreciate the black plastic rear bumper and cargo sill, which helps the Sienna look a bit tougher, as well as adds some scratch-resistant loading practicality.

Inside, the Sienna Woodland Edition gets standard black SofTex faux leather upholstery, jazzed up a bit with bronze stitching and an attractive geometric pattern embossed into the surface. Otherwise, it’s your basic XLE fare here, with a high center console with a huge storage cubby beneath it, a few decorative splashes of striated aluminum-look trim, and a swoopy dashboard housing analog gauges and a 9.0-inch touchscreen display.

Crossover converts will love the console shifter and tall seating position, and the Sienna is a pretty nice place to spend a long drive (as long as you don’t have to interact with the dated infotainment system much). Materials up front and in the second row are nice enough without sacrificing spill- and dirt-friendly ruggedness, while the third row is decidedly more plasticky. That’s par for most non-luxury three-row vehicles, though. 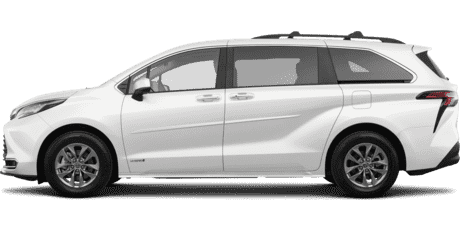 Minivans live and die by their passenger-hauling capability, and unfortunately, the Sienna comes up a bit short. Both the front and second-row bucket seats are comfortable and supportive, and the latter pair slides fore and aft to provide a bit more legroom for folks in the way-back. Even so, third-row passengers will lament the tight shoulder room and claustrophobia-inducing windows. The Honda Odyssey and Chrysler Pacifica do much better on that last front, with larger apertures that let some light in.

Cargo capacity suffers as well, especially if you need to haul longer items. Seats-up space is respectable at 33.5 cubic feet, but with the third row folded (and not all that flat, mind you), the Sienna only offers 75.2 units, down at least 11.4 over the next-worst minivan rival. Maximum luggage room is worse still. At 101.0 cubic feet with the third row folded and the second row scootched forward – it’s not removable, and it doesn’t fold flat – the Sienna comes up more than 39 cubes short.

The Woodland Edition comes with some features to appease folks who are willing to haul their cargo outside the van. A roof rack with crossbars and a tow hitch rated for the Sienna’s 3,500-pound towing capacity are both standard. Even so, the Sienna offers more interior room than any crossover. In fact, its below-class-average cargo area with the third row folded is still bigger than that of the Chevrolet Tahoe.

And space is but one aspect of the Sienna’s decent comfort score. A pleasant freeway ride, four cosseting bucket seats, and limited wind and road noise helped the Toyota hybrid feel downright posh on a long trip. I also liked the hybrid system’s silent, smooth EV operation, and the van is capable of some decent speed without firing up the engine. Push the accelerator too far, though, and the engine and CVT are prone to persistent high-RPM drone.

Oh dear. I’ve become a bit spoiled. You see, my two most recent Toyota products before the Sienna were the Tundra pickup and the Lexus NX crossover, both of which sport the automaker’s newest infotainment package displayed on a big 14.3-inch touchscreen. By comparison, the Sienna’s old software looks and feels very dated, with laggy touch response and graphics that haven’t been stylish since the Bush administration. And compared to its chief rivals, the Sienna’s tech suite still comes up short.

The Kia Carnival SX, for example, boasts the automaker’s excellent software displayed on a 12.3-inch screen, and the Chrysler Pacifica Touring L’s 10.1-inch display gets standard wireless Apple CarPlay and Android Auto – neither of which are available on the Sienna. Toyota’s 4.2-inch gauge display is likewise unimpressive, but at least the twin analog gauges are crisp and easy to read. Unfortunately, the same can’t be said of its grainy rear camera – thank goodness for standard front and rear radar sensors.

Kiddos in the back seat might be happier with the Sienna than the adults up front. My Woodland tester came with the $1,415 rear-seat entertainment system, which puts an 11.3-inch, 1080p display on the roof over the second row and an HDMI input in the second-row console. But again, the Pacifica one-ups the Sienna with available Amazon Fire TV apps and a pair of rear-seat displays.

With 245 horsepower combined between its Atkinson-cycle 2.5-liter inline-four and pair of electric motors – one per axle – the Sienna is actually the least powerful minivan on the market. That shouldn’t dissuade consumers though, as it feels pretty spry in normal traffic. Its front and rear electric motors put out a healthy 199 and 89 pound-feet respectively, so the Toyota hybrid has more than enough juice to keep up with traffic when the light turns green. And although Toyota doesn’t quote combined a torque rating between the pair of electric motors and the gas engine, I would be surprised if the number weren’t close to 300 lb-ft.

Unfortunately given its anti-SUV positioning, the Woodland Edition doesn’t seem to add much in the way of rough-road capability. In spite of the lifted suspension, the Sienna still only has 6.9 inches of ground clearance, and a long front overhang means the van will scrape its schnoz on parking lot entrance ramps, much less off-road obstacles. Maybe the aftermarket can step in and help, as there seems to be a fair amount of space in the wheel arches for larger tires than the P235/60R18 rubber found on the Woodland – a size shared with lesser Siennas.

Sporty driving isn’t really in the Sienna’s wheelhouse, and the added ride height of the Woodland Edition doesn’t inspire confidence either. But the hybrid is stable and surefooted in just about any traffic situation, and the floor-mounted battery lowers the center of gravity to help the van keep an even keel on cloverleaf interchanges and winding roads. Regenerative braking is still a bugaboo that Toyota’s engineers haven’t quite mastered, as evidenced by the Sienna’s touchy, non-linear left pedal, but slam the pedal down and the van comes to a quick, stable halt.

The so-called Toyota Safety Sense 2.0 suite of technologies worked admirably during my week with the minivan. The Sienna kept its lane position well and responded to the flow of traffic smoothly, and its audible and tactile alerts were just intrusive enough to keep the driver engaged without being annoying.

The 2022 Toyota Sienna’s single greatest trump card over its minivan competition – really, any three-row vehicle – is fuel economy. Swilling a steady diet of electrons and regular unleaded, the Sienna Woodland Edition is rated at the same 35 miles per gallon city, 36 highway, and 36 combined as any other all-wheel-drive Toyota van. Get front-wheel drive and the numbers rise to 36 across the board.

The next-best competitor is the plug-in, front-drive-only Chrysler Pacifica Hybrid, which achieves 30 mpg combined, although if you can charge it overnight, the Pacifica has a range of 32 electric miles. If you need all-wheel drive, you’re stuck with the gas-only Chrysler Pacifica, which hits 20 mpg combined. The Sienna’s front-drive competition is slightly better, at 22 mpg combined for both the Honda Odyssey and Kia Carnival.

I think Toyota could put a nail in its competitors’ efficiency coffins by giving us a Sienna Prime. Borrowing the plug-in RAV4’s powertrain would give the minivan some EV-only range and more than 300 horsepower. Alas, such a vehicle doesn’t exist – yet.

Starting at $34,710 plus $1,215 destination, the Toyota Sienna family is a reasonably priced entry in the minivan class, undercutting the Chrysler Pacifica by a couple grand and costing a few hundred bucks more than the Honda Odyssey and Kia Carnival. Six months of driving would recoup that added cost in fuel savings alone.

The Sienna Woodland Edition is a bit dearer, though. Starting at $46,545 with destination, my tester’s final price was $48,325 thanks to the rear seat entertainment system, an extra set of wireless headphones, and illuminated door sills. Were it my money, I’d skip the extra kit and stick to the base Woodland Edition – tablets and phones are cheaper and easier to use than the Sienna’s entertainment system, and the door sills are a needless bauble.

Those who have no pretensions of off-road enthusiasm might be better served by the $44,235 Sienna XSE AWD, whose sharp wheels, sporty body styling, and bigger variety of colors might be appealing. But while it’s no crossover – and for me, that’s a good thing – the Woodland Edition seems to be a sweet spot in the Sienna lineup thanks to its standard roof rails and trailer hitch and added ride height. It’s a darn good van, which in my mind makes it a far better family car than any SUV out there.

Is the Toyota Sienna efficient?

In spite of its added ride height and standard all-wheel drive, the Sienna Woodland still only has 6.9 inches of ground clearance. A long front overhang and rear trailer hitch impede approach and departure angles, too. We wouldn’t recommend taking a Woodland Edition down a rutted trail, though a dirt road to the campground will be fine.

Is the Toyota Sienna roomy?

The Toyota Sienna’s second-row seats aren’t removable, which isn’t great for maximum cargo carrying. But it does make those bucket seats much more comfortable than the removable or foldable perches found in other minivans, and there’s plenty of space for four adults. The third row is okay for kids and young teens, and there’s enough cargo space with the seats up for a long weekend trip.