2022 Nissan Frontier Pro-4X Review: Just As Tough, Better Than Ever

Yes, the outgoing Nissan Frontier was old, lasting more than 15 years in the US with minimal updates. And yet, Nissan's old-school pickup still sold well until the end, moving as many as 80,000 units in 2018 – its best sales year ever. But for as much as people (or work fleets) clamored for the ancient Frontier, Nissan's mid-sizer was well overdue for an update given the competition from Ford, Chevrolet, and others.

The 2022 Nissan Frontier, then, is a welcomed improvement. This mid-sizer has handsome looks, a modern V6 engine (technically introduced on the 2020 model), updated suspension bits, and a totally new cabin that fits right in for 2022. It may have taken a minute – or 16 years – but Nissan finally built a truck that feels modern, competitive, and genuinely worth consideration.

Score updated April 2022. A vehicle's ratings are relative only to its own segment and not the new-vehicle market as a whole. For more on how Motor1.com rates cars, click here.

The new Frontier is the best-looking truck in its class. Period. The chiseled fascia features C-shaped headlights, a black grille, and Lava Red badge accents (in Pro-4X guise), with the word “FRONTIER” stamped imposingly near the hood line. Huge, functional skid plates rise up from beneath the vehicle – again, part of the Pro-4X package – and connect to a second gaping maw just below the main grille.

The taillights mimic the front fixtures in their shape, and there's another “FRONTIER” stamping at the base of the tailgate, in case you forgot. This truck also features the Sport Bar add-on, which gives the Frontier more visual ruggedness, but it’s a $1,095 option that also requires the $1,990 Pro-X convenience package and the $990 Technology package. Probably not worth it for the added panache.

The Frontier follows the same basic-but-functional tendencies of most mid-size trucks when it comes to interior design. The heavy use of hard, black plastic on the center console and door panels is expected for this segment, with matching black leather seats and embroidered “Pro-4X” logos in the headrests. Opting for cloth upholstery affords you Lava Red stitching on the steering wheel and seats, but the leather setup forgoes those bright accents. 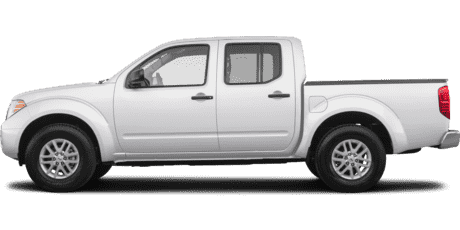 The Frontier Pro-4X gets an immediate ding for its ride quality – not uncommon for many off-road trucks. Over broken and imperfect pavement, the rear leaf springs scarcely absorbed blows and road noise was prevalent. If you're on a perfectly paved piece of highway, the Frontier is a decent cruiser with little feedback from the knobby Hankook all-terrain tires (265/70), but over anything other than immaculate asphalt and the Frontier is rough.

At least Nissan's beloved Zero Gravity leather seats are available in this truck as part of the $2,790 Pro Premium package (equipped here). Those buckets contour perfectly to the body and offer excellent lumbar support. They even feature an aggressive heating function as part of the $400 Convenience package that will get your butt properly toasty in the top setting.

Compared to the Tacoma or Ranger, the Nissan Frontier feels more spacious from the driver's seat, with the Crew Cab model offering ample overhead room in the front two chairs. But, the Frontier's 4.9-foot bed in Crew Cab configuration is the smallest in the segment by a few inches and its 1,230-pound payload capacity is third-worst to Tacoma and Gladiator. And if you want easier access to the bed itself, the Bed Access package – basically a drop-down step on either side – is an extra $540.

The base Frontier uses a standard 8.0-inch touchscreen with a corresponding 7.0-inch in-cluster display, while the Pro-4X opts for a larger 9.0-inch touchscreen at no extra cost. Apple CarPlay and Android Auto are standard across the board – both wired connections – while navigation, satellite radio, and a Wi-Fi hotspot are exclusive to the Pro-4X trim. The Pro-4X also offers two USB-A and two USB-C ports, as opposed to one of each in all other trims.

Nissan's ubiquitous infotainment system carries over, and it's fine. The graphics aren't totally crisp, the layout is a bit cluttered, and touch responsiveness is laggy. Ticking over to CarPlay alleviates those former two issues, at least.

The V6s in the Tacoma and Colorado lack low-end torque, and unless you live in Europe, the Ford Ranger is only available with a four-cylinder engine (albeit a good one). The Frontier, then, easily has the most likable six-cylinder in the segment – and the most powerful.

The 3.8-liter engine pumps out 310 horsepower and 281 pound-feet, outmuscling the Colorado by a few horses and the Tacoma by more than 30. And it feels robust; pull off the line is plentiful and high speeds are easy to achieve without protest. There's no whining or underwhelming acceleration from the Frontier's V6 when you put your foot hard on the gas.

Joining that V6 is a nine-speed automatic transmission that, in this case, sends power to all four wheels on-demand. Shifts are quick and decisive, with no nasty rev hang or indecision. There are no paddles behind the steering wheel – not uncommon in trucks – but there are no drive modes, either. Instead, the Frontier Pro-4X offers a low-range four-wheel-drive mode with a locking rear diff, Bilstein off-road shocks, and a crawl ratio of 55:1 – so it can handle moderate off-roading.

Unfortunately, the Frontier Pro-4X lacks the advanced features found in competitors like the Taco TRD and the Colorado ZR2. Nissan forgoes equipment like remote reservoir shocks, a front-locking diff, adaptive dampers, and more, meaning the Frontier won’t be able to keep up with Toyota and Chevy when the trail gets tough.

The Frontier suffers some in the safety department. ProPilot assist is unavailable entirely on this truck due to the lack of an electrically assisted steering rack, and adaptive cruise control is limited to the options list. ACC is packaged into the $990 Technology package, along with a lane departure warning, blind-spot monitoring, rear cross-traffic alert, and high-beam assist. The Pro Convenience package also adds a 360-degree camera.

No ProPilot is certainly a negative, but the available systems do work well. The 360-degree camera helped me ease the truck into parking spots while adaptive cruise control did its job on the highway, maintaining a steady pace to the vehicle ahead of it and braking as needed. Unfortunately, the new Frontier has not yet been crash-tested by the NHTSA or the IIHS.

Opting for the two-wheel-drive Frontier affords you 18 miles per gallon city, a solid 24 highway, and 20 combined. The four-wheel-drive model is less efficient, returning 17 mpg city, 22 highway, and 19 combined. During our test, which included extensive highway miles, the Frontier averaged around 15 mpg.

Only the Honda Ridgeline is better with all-wheel drive, returning up to 21 combined, while the Ranger Tremor matches the Frontier overall with 19 combined. But the Ford is just a bit better around town. The Colorado ZR2 and Taco TRD Pro, meanwhile, fall just short of the Frontier’s combined figure.

The 2022 Nissan Frontier isn't the most attainable mid-size truck. Its $29,365 starting price (with $1,225 destination included) makes it one of the least affordable trucks in the class. That said, the Frontier is also the only truck in the segment with a standard V6 and automatic transmission.

That may sound like a lot of money – and in a vacuum, it is – but other off-road trucks in this class aren't much cheaper. The Toyota Tacoma TRD Pro starts at $47,350, the Gladiator Rubicon costs $48,885, and the Colorado ZR2 easily surpasses $50,000 with all the boxes ticked.

My recommendation? Splurge on the Frontier’s Pro Premium and Technology packages – they’re well worth it. But feel free to forgo options like the sport bar, side steps, and if you’re tall like me, even the bed steps. Whatever you do decide, you should be happy with the Frontier as a whole. This truck is a handsome, genuinely competitive off-road truck in a class with some solid alternatives.

How Much Is The New 2022 Nissan Frontier?

Is The 2022 Nissan Frontier Bigger?

Yes, the 2022 Nissan Frontier is bigger than the truck it replaces. This model is up to 224.1 inches long compared to the previous Frontier, which maxed out at 219.4 inches. This truck is also slightly wider, too, at 73.0 inches compared to the old truck’s 72.8-inch width.