Jeep is not a brand that typically steps out of its very particular box. It's an SUV manufacturer that builds vehicles for slowly lumbering along a trail or up a rocky path. And while there are exceptions to every rule (hello Grand Cherokee Trackhawk!), its vehicles take the Trail Rated badges seriously.

That's why the Jeep Gladiator Mojave is such a breath of fresh air. Rather than a vehicle designed solely for crawling up rocky outcroppings, it takes a page out of the Ram TRX's book. This is a desert runner, a thing designed for dust, dunes, and high speeds. Unfortunately, it only has the hardware for the first two items, not the third. At the same time, the Gladiator Mojave suffers from some of the same ills as the Gladiator Rubicon. We like it a whole lot, but between purpose and price, it's a little hard to understand the Mojave's role. 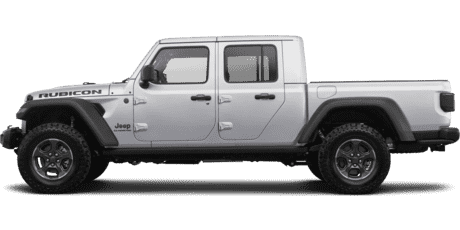 save over $3,400 on average off MSRP* on a new Jeep Gladiator

With respect to Jeep's popular Rubicon and Trailhawk trims, we're all-in on the Mojave-specific details. From the orange accents, to the meaty 2.5-inch Fox shocks, to specific drivetrain changes designed specifically for the Mojave's desert-running mission, this Gladiator feels like a long-overdue complement to Jeep's off-road enthusiast lineup.

There are practical benefits to these changes, too. The Mojave-specific shocks and the Gladiator's longer wheelbase made this inarguably the most stable member of the broader Wrangler family – on paved roads, we experienced little of the solid-axle wobble we've come to associate with Jeep's most traditional vehicles. And faced with washboard dirt trails, the Gladiator Mojave proved plenty happy to bound over them at speed, its uprated shocks and 33-inch tires absorbing the worst of the abuse.

We'll never get tired of yanking the roof and doors off a Jeep. Okay, that's a lie, because the doors are heavy as hell and you'll need two people to wrangle (pun intended) the available hardtop. The entire process is exhausting. But after a bit of work, there are few vehicles that can match the elemental driving experience of a roofless, doorless Jeep. The Gladiator Mojave doesn't really add much to this formula, but hey, occasionally we need to remind brands that things are cool and they should keep doing them. Carry on, Jeep.

Better Every Day Than A Rubicon

This might be controversial, but the Gladiator was already our favorite member of the extended Wrangler family because of the way the longer wheelbase makes everyday life more tolerable. The Gladiator Mojave extends that lead, giving Jeep's pickup truck all the attitude and style of a Rubicon without sacrificing much in the way of on-road livability.

The ride is more composed, and while it's fair to argue that you're giving up breakover angle and enlarging the Wrangler's tight turning circle by moving to the Gladiator, we find those minor sacrifices unless you're off-roading on a literal daily basis. If that's the case, carry on with your Wrangler. But for those who only spend a few days a month in the dirt, the Gladiator and specifically the Gladiator Mojave is better balanced and more livable.

Are You Not Entertained?

Stuck With The Base V6

It's a real shame Jeep sticks Mojave owners with the default 3.6-liter V6. It's not that the Pentastar is bad – okay, it is old – but that the 3.0-liter diesel engine or the Wrangler's mild-hybrid four-cylinder offer improved performance with other tangible benefits. Specifically, both the turbocharged 2.0-liter and the oil burner provide far more low-end torque, which the V6 is desperately short on.

Sure, ordering either of these engines means giving up the option of a six-speed manual transmission, but the eight-speed ZF automatic is good enough to make that an easy trade. The diesel is also quite a bit quieter than the Pentastar, which grows wheezy and unpleasant as the engine speed climbs.

And if we’re making wishes, the Gladiator Mojave’s purpose makes it seem like an obvious choice for a 392 variant. So yeah, Jeep, if you’re reading, let’s get on that.

Barely More Efficient Than A Raptor

The other reason we'd opt for a different engine comes down to fuel economy. With just 285 horsepower, 260 pound-feet of torque, and an EPA-estimated fuel economy rating of 17 miles per gallon city, 22 highway, and 19 combined, the Gladiator Mojave is down 165 horsepower and 250 pound-feet of torque on a Ford Raptor. And yet, the twin-turbocharged Ford F-150 Raptor nets 15 mpg city, 18 highway, and 16 combined. According to the EPA's website, you'll save $500 per year on fuel costs with the Gladiator, but we'd happily hand over all that extra coin for the added power and torque.

You might be wondering why we brought up the Raptor. It's because our Gladiator Mojave's as-tested price matches the hi-po F-150's starting price. Sure, the Jeep is substantially cheaper in its base form – $43,875 – but you'll have to give up a whole lot of gear to maintain that price. You won't get a hardtop, or an 8.4-inch touchscreen, the eight-speed automatic transmission, LED headlights, leather upholstery, a forward-facing camera, or any of the active safety gear.

The good news is that a stripped-out Gladiator Mojave will be mechanically identical (gearbox aside) to our $65,000 test truck. While we'd miss some of that equipment, nothing about this truck felt like it was carrying $21,000 worth of options.