Cheap and cheerful has gotten a lot better.

When I was but a young lad growing up in metro Detroit, economy cars were bad. Dreary crapboxes like the Pontiac Sunfire (my first car) and Ford Escort cluttered the roads of the Motor City, wheezing along and leaving their owners in abject misery. Today's market for cheap driving is altogether different.

Modern compact sedans are, by and large, well equipped and well built. There's also a greater emphasis on style and design, with automakers treating even their lowliest offerings as expressions of a driver's personality, rather than a big neon sign saying “I'm a cheapskate.” The redesigned 2021 Hyundai Elantra typifies this approach. It's an over-designed, tech-filled car that still retains the segment's hallmarks of efficiency and affordability. Just don't go in expecting a wild and crazy driving experience. That part of the compact market hasn't changed.

Let me start by saying I like the Elantra's exterior design, especially because the last one was just so damn conservative. The latest generation, with its hard body lines, expressive fascia, and odd grille is just the sort of funky that makes sense for a small car. A vaguely bustle-back rear is an adventurous touch, but Hyundai's stylists glitzed it up with an attractive strip of LEDs and a prominent Elantra wordmark.

But I can also appreciate the views of the folks I asked about the Elantra, most of whom found it too choppy and a bit weird. The proportions can be odd, with a somewhat cab-forward emphasis and a sloping hood that clashes with the more modern touches.

The cabin's overall design is attractive, and I'm pleased to see Hyundai put its advanced technology in such a prominent place. A Mercedes-style slab of glass houses twin displays, both 10.3-inch units on this range-topping Elantra Limited, while a four-spoke steering wheel looks like something plucked from Audi. Honestly, there are worse places to poach designs from than Germany.

So why is the Elantra's Design score so low? Through my week with this car, the interior rattled, creaked, and made all other manner of annoying sounds. Something, somewhere came loose, so every time I braked or accelerated, I'd hear a bolt or nut rolling forward. Hyundai is capable of high-level fit and finish – and it's worth noting material quality here is mostly good, although the hard plastic on the center console makes for a poor knee rest – but the Elantra I tested felt cheap and cobbled together. This is a 2021 design with 1998 build quality. 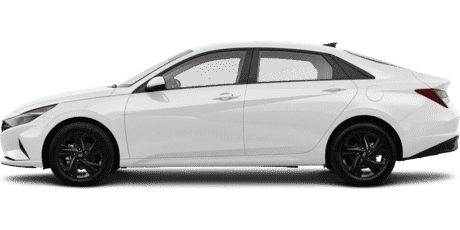 Affordable compact cars have never placed a great emphasis on comfort, so the Elantra's average score isn't a huge surprise here. The cabin is roomy and will happily seat four adults – there's an impressive 38.0 inches of second-row legroom – but the front buckets and rear bench are uninspiring and flat, offering modest support. There is leather upholstery on this top-spec tester and the chairs are heated – sadly, Hyundai limits ventilated seats to the hybrid-powered Limited. Getting in and out of any seat is easy too, with wide-opening doors and a generous roofline.

The Elantra has a voluminous trunk, with 14.2 cubic feet of space. That's less than you'll get on the Honda Civic, although the difference is negligible at six tenths of a cube. In the cabin, there's enough room for all your goodies, thanks to sizable door pockets and an ample change tray under the 10.3-inch touchscreen.

The ride is good, isolating the cabin from rougher roads well. Only the biggest impacts reverberate through the chassis, while the overall level of stability, both through the steering and the chassis, is adequate even at higher speeds. The Elantra also has a solid handle on wind and road noise. You won't confuse this sedan with a luxury vehicle, but Hyundai's engineers deserve credit for making it behave like something that starts at more than $20,000.

The Elantra's available twin 10.3-inch displays are the best in the class, offering crystal-clear resolution and responsiveness. I especially enjoy the digital instrument cluster, which offers four different themes that owners can select individually or link to the driving mode. Unlike what you'll find in a Volkswagen Jetta, though, the Elantra doesn't break new ground in how it displays driving data. There's a pair of virtual dials, which sandwich a central display area that shows trip info, active safety status, and other details.

The 10.3-inch touchscreen uses the same operating system as what you'll find in more premium Hyundai/Kia products, like the Sorento crossover and Sonata sedan. Like those cars, the upmarket displays require a wired connection for Apple CarPlay – wireless connectivity is strangely only available in the lesser setup. Beyond that annoyance, you'll see the same irreverent touches, like nixie tube graphics for the radio station and a selection of nature sounds to soothe you when Howard Stern goes on break.

Hyundai offers a range of powertrains for the Elantra, and while the turbocharged 1.6-liter in the N-Line sounds fun and the hybrid-powered model seems promising, the base 2.0-liter is nothing to write home about.

Output is the worst in the segment, slightly behind the 149 horsepower and 146 pound-feet in the Nissan Sentra. The Elantra’s 147 hp and 132 lb-ft of torque is barely enough for to get out of its own way. There's some low-end grunt, but it disappears quickly as the revs climb. Highway passes, meanwhile, require some serious investment from your right foot. The biggest mark against the standard engine, though, is that Hyundai doesn't ask much more for the N-Line's 201 hp and 195 lb-ft, or the Hybrid's electrically supported 195 lb-ft.

If you go with the 2.0-liter, the only available gearbox is of the continuously variable variety. This transmission is as anonymous and unremarkable as the engine, managing the power well enough but hardly lighting up the driver's life. At least there are few bad manners – revs don't hang, even under heavy throttle. If all you want is to get from A to B without drama, this powertrain is the way to go.

That kind of applies to the way the Elantra handles. Nothing here is especially poor – the body motions are well-mannered and predictable, and the McPherson strut front/torsion-beam rear suspension tolerates sudden directional changes – but the Elantra is dull as dirt. Again, both the N-Line and Hybrid sound more exciting, with both models featuring a multi-link rear end that should result in more capable handling.

I like the active safety packages on the Toyota Corolla and Honda Civic, but the Elantra Limited is the smartest car in the class. Not only is every piece of active safety kit standard here, but Hyundai goes beyond its rivals in a few key ways.

For example, the automatic emergency braking system can detect pedestrians and cyclists, but it can also detect an oncoming vehicle while turning left at an intersection and warn the driver. There's also a Safe Exit Warning that can alert passengers to oncoming traffic when trying to get out of the car, and a rear-seat reminder system. But the crème de la crème in the Elantra is Highway Drive Assist.

This is the same Level II driver aid Hyundai features in its larger, more premium offerings, but it's a no-cost feature in the top-end Elantra. And HDA works here as it does anywhere else, keeping the car neatly centered in the lane with small steering corrections and handling surrounding traffic easily.

If You Want A Really Hot Elantra:

The Elantra's anemic 2.0-liter engine pays dividends at the gas pump, where it returns an EPA-estimated 31 miles per gallon city, 41 highway, and 35 combined. It's not the thriftiest car in the class – that honor goes to the 36-combined-mpg Honda Civic and its turbocharged four-cylinder engine – but the Elantra exceeds the Corolla (31 city, 40 highway, and 34 combined), as well as the Volkswagen Jetta and Nissan Sentra (both return 29 city, 39 highway, 33 combined).

Over 233 miles of mixed testing, I saw a computer-indicated 34.6 miles per gallon. Had I been a bit more patient with the throttle, that number would have likely been higher, although it's close enough to the EPA combined figure to satisfy.

Prices for the Elantra range start at $20,655 including the $1,005 destination charge. The Limited trim starts and stops at $26,455, as there are no optional extras on this trim. Everything is standard, so all you need to do is pick a color. The biggest pricing issue with the Elantra Limited is its siblings.

The Elantra Limited Hybrid carries similar equipment (with the standard ventilated seats, I might even say it's better) for $29,105. There's no question that at this price point $2,650 is a substantial gulf, but not only will the Hybrid Limited match the gas model on equipment, it offers far more low-end torque. And at 49 city, 52 highway, and 50 combined, it’s more economical. Also compelling is the Elantra N-Line, which starts at $26,205 for a model with a dual-clutch transmission. If driving verve is in any way important to you, this 201-horsepower sedan is a more interesting option (even if you give up some safety gear).

In terms of competition, the Elantra makes a strong case for itself. Honda and Toyota are more expensive ($22,715 and $21,100, respectively and with destination), and they're pricier on the high end, too. A Civic Touring costs $29,315, but it has more power, slightly better fuel economy, and a less polarizing exterior with a nicer interior – it remains my choice in this segment. In a lot of ways, the Corolla XSE is a more natural competitor for the Elantra, featuring a similarly dull powertrain and a boring driving experience. I'd pass on the Toyota, though, as it costs more ($27,000 out the door) and its active safety suite lags behind Hyundai's.