One of Britain’s oldest auto manufacturers still knows how to make ‘em special.

If you’re to believe Hollywood movies, car commercials, and pop album covers, Southern California is convertible country. But while Los Angeles, San Diego, and Palm Springs all see more than their fair share of warm, sunny days, it’s not difficult to find that crisp, crystalline alpine air tinged with snow, even in spring.

Such was my luck – and I do mean luck – when Aston Martin handed me the keys to a 2021 Vantage Roadster. Their suggested route would take me from the California desert to the mountain community of Idyllwild, and in spite of the 90-degree heat in the valley, skiffs of snow increasingly dotted the roadside as the sports car climbed Highway 243. Through the freezing temperatures, the Vantage made for a marvelous twisty-road companion, offering driver engagement, comfort, and style in equal measure.

Brisk In All Senses

The first hour of my drive consisted of a long highway cruise, no bad place to sample a drop-top Aston Martin. Over the last few decades, the automaker has built a well-earned reputation for sophisticated road manners at higher speeds, and the Vantage doesn’t disappoint its forebears. I’d forgotten that I put the drive selector into Sport Plus when fiddling with the car before setting off, yet the ride was still compliant on some rather nasty concrete surfaces – buttoned down and a bit starchy, sure, but never harsh. Set in Comfort, I could have driven the Vantage from Alaska to Florida without complaint.

Still, no one buys an Aston Martin to sit in traffic, and luckily, the road from the desert floor to Idyllwild was mostly empty. But for a few surprise patches of ice lurking in the shadows and some rocks and stones littering the pavement, it was the perfect environment to let the Vantage and its twin-turbocharged 4.0-liter V8 off the chain a little bit. The Mercedes-AMG–supplied engine makes a stout 503 horsepower and 505 pound-feet, with an eight-speed automatic gearbox handling shifting duties – unlike the 2021 coupe, no manual will be available on the Vantage Roadster, and it goes away entirely for 2022.

If you have to drive a shiftless sports car, this might be one of the better options out there.

That said, if you have to drive a shiftless sports car, this might be one of the better options out there. The traditional autobox isn’t as scintillating as the Porsche 911’s available PDK dual-clutch transmission, but the Aston Martin is still an absolute blast to rip up a straightaway, cracking off quick gear changes with a satisfying bark from the exhaust. Although the transmission does a good job of selecting gears on its own, particularly in Sport Plus that brings more aggressive engine braking and redline shifts, the pilot can take over with a large, well-placed set of paddle shifters that make the drive that much more engaging.

Highway 243, which I had just recently driven in a Mercedes-AMG CLA 45, is a complex road. Its fast, sweeping switchbacks down low test the Aston’s balance, and it excels thanks to front-midship engine placement and a rear-mounted transmission that keep the car’s polar moment centered around the driver. Neither under- nor oversteer show up unless the Vantage is deeply provoked, and even then, the driver can easily balance the car with judicious use of the throttle or brakes.

Gone are the days when Aston Martins smothered their drivers in acres of sheet metal, offering limited headroom and pinched footwells.

As you climb higher, the road tightens into tight, gravel-strewn hairpins, which tax overall grip. But again, the two-seat convertible handles such obstacles with elan, with good steering that weights up appropriately as the tires reach their high limits of grip. Like any droptop, the Vantage Roadster gives up some overall talent to its fixed-roof sibling, including 132 extra pounds (for 3,726 total), but the tradeoff is worth it for the scents and sounds that a convertible provides.

Speaking of, even with the top stowed and ambient temperatures dipping into the low-30s, the Aston Martin Vantage Roadster is a well-engineered vehicle for the early spring. Heated seats, a high beltline, and excellent airflow management allowed me to keep the windows down without sacrificing much warmth, and only upon stopping for a quick jolt of caffeine did I need to put on my jacket.

Comfort, too, is a strong suit. Gone are the days when Aston Martins smothered their drivers in acres of sheet metal, offering limited headroom and pinched footwells. Instead, this Vantage comforts its passengers with legs-stretched, hats-on space. Our tester also had a $3,400 set of Sport Plus bucket seats, which were plenty supportive without being too confining. At 7.1 cubic feet, luggage space is put at a premium, with a wide-but-shallow trunk. The Vantage beats out a 911 Cabriolet, whose 4.6 cubes are relegated to a deep, narrow bin up front, though the Porsche does offer vestigial rear seats that work well for cargo. 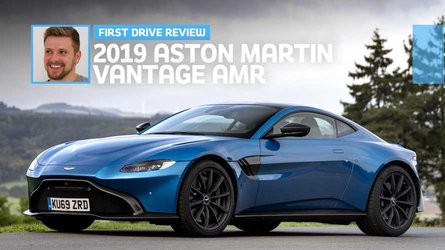 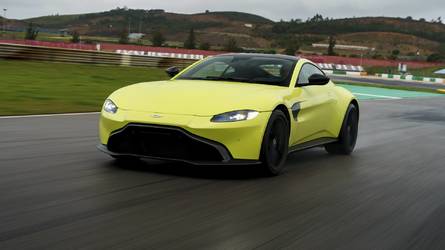 Managing audio and navigation duties is a Mercedes Comand–based infotainment package that, quite frankly, was already obsolete when Benz retired it in 2018, much less in 2021. Reskinned with Aston Martin graphics, the 8.0-inch display is smaller than what you’d find in modern Porsche and AMG competitors. Navigating the display is the work of a console-mounted clickwheel, which is intuitive enough, but it still needs a touchscreen to be truly easy to use. And maddeningly, Apple CarPlay and Android Auto are completely unavailable.

At the very least, the interior is well-crafted, with lots of leather and genuine metal trim appearing on most touchpoints. The Vantage feels like a special place to sit given its high-quality materials, and most secondary controls are easy to find and use. In spite of the leather, metal, and Alcantara coating the cabin, the overall design looks alien and misshapen. A squared-off steering wheel, bulging dashboard and center stack, and slanting HVAC vents appear downmarket, a vast departure from its predecessor’s handsome, traditional cabin – stylists took some gambles here, but they didn’t pay off.

Luckily, you can’t say the same about the bodacious exterior. Our tester’s optional vaned grille is far more conventional than the standard mesh mouth, but in either case, the Aston Martin Vantage is a distinctive convertible. The hood is long and low, and the swept windshield, functional fender vents, and a pinching rocker panel give the car a sense of motion. The Vantage’s controversial ducktail spoiler with integrated accent lighting is much less polarizing on the convertible, giving it visuals that are better balanced than the coupe, to my eye. Those risky design choices work very well here.

The 2021 Aston Martin Vantage Roadster starts at $147,000, putting it in the territory of the Mercedes-AMG GT C Roadster with which it shares an engine, as well as the forthcoming Porsche 911 Carrera GTS Cabriolet and bygone Audi R8 Spyder. With abundant liberties taken on options, my tester cost a dizzying $197,286, including $2,300 for the vaned grille, $7,600 for the lustrous Spirit Silver paint, and $4,600 for the lightweight 20-inch wheels. In spite of its luxurious interior and phenomenal styling, that’s still a lot of coin for a car that’s possibly less capable than either of its primary competitors.

However, more Ferraris and Lamborghinis are sold each year than Aston Martins, meaning ownership of a Vantage Roadster is entry into a very exclusive club. And in spite of its Mercedes-sourced heart, the cheapest A-M droptop is dripping with British character and talent in myriad ways – it’s a lovely GT, a well-balanced sports car, and an imposing presence at the valet stand. In fact, if the convertible offered a manual transmission like the coupe, it’d be very high on my daydream-inheritance shopping list. Those with less Luddite (and less fantastical) circumstances than my own will probably snatch up every Vantage Roadster they can get.