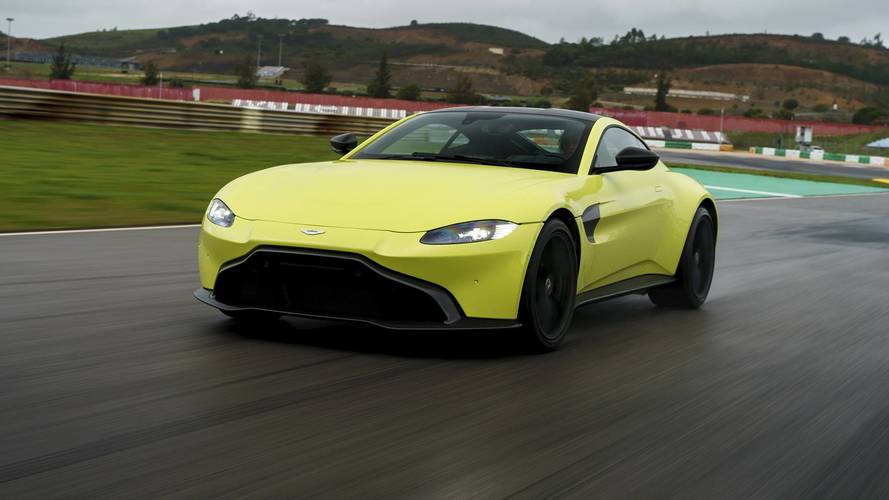 The entry-level Aston is hugely exciting both on tracks and on the road.

The redesigned 2019 Aston Martin Vantage in fluorescent Lime Essence streaks through the gray mist and down the front straight of Portugal’s Algarve International Circuit. Here at the southwesternmost point of Europe, Aston Martin’s stunning volume car and entry point into the brand is $149,995 worth of fun, even when there are puddles on the track.

More aggressive and athletic than its predecessor, which debuted in 2005, the new Vantage’s real mission is to stand apart from the rest of the Aston Martin product line, both visually and dynamically. A sloped shark nose and jutting, three-dimensional grille and lip extensions make for a very serious race face. The low-arching roofline and broad haunches make this front-engined coupe look grid-ready. Press the start button on the reimagined, driver-friendly center stack and the exhaust bark confirms that the Vantage, compared to its longer, softer cousins, is Aston Martin talking smack.

That gregarious sound emanates from the formidable Mercedes-AMG-sourced biturbo 4.0-liter V8 engine, which makes 503 horsepower and 505 pound feet of torque. This is the second application by Aston Martin of the German mill, the first being the delightful DB11 V8, the Vantage’s larger cousin. The AMG pumps about 80 hp more into the new two-seater than the old V8 GT, and at 3,373 pounds, it carries around about 300 pounds less, for a greatly improved power-to-weight ratio. After beating it around the track, Aston Martin’s claims of a 0-60 mph time of 3.5 seconds, and a top speed of 196 mph, seem achievable.

While Aston Martin tasked its exterior design team with making the Vantage look different from any other offering, it was up to Matt Becker, a former Lotus dynamics engineer and currently Aston Martin’s chief engineer, and his team to make the car drive differently.

The Vantage rides on the same riveted and bonded aluminum chassis and double wishbone front suspension as the DB11, only here its specific tuning delivers a much sportier experience than the tourer. Both the spring and damper rates are much higher, and the rear axle is more rigidly mounted to the body because Becker likes a car that oversteers. So, if you enjoy sliding cars, this one’s been engineered for plenty of controllable throttle-steer.

Three powertrain and chassis setting modes give the driver options. As expected, with each more extreme mode the exhaust progressively opens up, gifting the occupants with more cacophonous bangs and pops while automatic gearshifts on the eight-speed ZF transmission become more aggressive.

Riding with Becker, who was determined to show us the full expression of the Vantage’s spirited dynamics, the car drifted around nearly all of the 15 turns on the venerable Portimão course. Clearly he designed a car he likes to drive, a bit squirrely and a little bit dangerous.

Almost four inches shorter than the DB11, the Vantage feels as firmly planted on the road as the grand tourer, yet acts far more assertively. Becker explains that despite the steering ratio being the same as the DB11’s, the Vantage’s shorter wheelbase makes it effectively feel more nimble.

The new Vantage gets an electronic rear differential – a first for Aston Martin. The e-diff links to the stability control system and electronically varies the torque sent to each of the rear wheels. Adding to the driver’s choices, both traction and stability control can be completely switched off if so desired. Becker wouldn’t have it any other way.

“It’s a very clever piece of kit,” Becker boasts. “It allows you to tune the car to be in its natural state, to be very agile. When you increase the locking torque on the back it basically lengthens the feel of the car, making it more stable.”

On track, we drove quad exhaust-tipped cars, but heard the V8’s voice just fine through the twin-exhaust version after we switched cars the next morning when we went careering through the Portuguese countryside. Morning Frost paint, a ghostly version of white, slathered this second Vantage. As with the DB11, lighter exterior colors on the Vantage better show off body details and character lines. And as a meticulous Aston Martin paint job takes about 50 hours to complete, the sheet metal feels smooth as a straight-razor shave.

The paddle shifters for manual transmission control are large and easy to get at, fixed as they are to the steering column, not the wheel. Shifts feel quick even when downshifting more than one gear at a time, and the engine is so filthy with torque that even if the driver miscalculates the proper gear, the engine magnanimously compensates for mistakes with seemingly little effort.

The driver sits as close as designers could get her to the center of the cockpit. For easy access to shortcut buttons, the center console has been reimagined. No longer using Aston’s traditional waterfall design, the Vantage’s controls are directly adjacent to the driver’s thigh, closer and more convenient.

A thoughtfully designed interior accommodates drivers as tall as six-feet six-inches. But even my five-foot five-inch frame fits perfectly in the cabin with good visibility. The seats are comfortable but firm and supportive and keep the driver stable even around slippery hairpin turns on Pirelli P-Zeros. And if driving it isn’t entertaining enough, it’s got enough cargo space in the trunk for two sets of golf clubs, so you can have fun shanking balls on the links.

The two brake options include cast-iron and lighter carbon-ceramic discs, the latter of which were fitted to our track cars. Despite the increased master-cylinder diameter, which supposedly shortens pedal travel compared to the DB11, we felt as though we had to press harder than normal to stop. While that might suit the boisterous character of the car, there were moments when it didn’t inspire a massive amount of confidence as a sharp turn approached.

Aerodynamic features, which were developed very early on in the design phase, means there are no deploying air blades or wings attached like an afterthought. The front splitter and rear diffuser as well as side gills and aero equipment on the undercarriage of the car such as upsweeps, all act in concert to keep the Vantage’s nose sniffing close to the ground while its rear end stays firmly planted. The effect produces solid balance and stability, as well as being aesthetically handsome.

Where the DB11 exudes a mature, monogrammed gentleman’s poise, the new Vantage personifies a dashing young rogue out to blast around and have a damn good time. Next year expect a manual transmission version, with a roadster to follow.

It seems rather appropriate that Aston Martin should celebrate its record-breaking 2017 sales and positive cash flow status, which came a year earlier than expected, with the party-on-wheels that is the Vantage. Even in the rain, it’s a hugely fun entrance to Aston Martin’s range.