Despite a refresh, Toyota’s truck-based SUV is showing its age

As Americans continue to gobble up SUVs at a prodigious rate, automakers are scrambling to get new, exciting examples of their biggest people movers to market. In early 2016, Nissan previewed the Infiniti QX80-based Armada, which is now on sale. And late last year, Ford introduced a hugely improved Expedition, while General Motors is allegedly prepping new Chevy, GMC, and Cadillac versions of its truck-based SUVs for 2020. 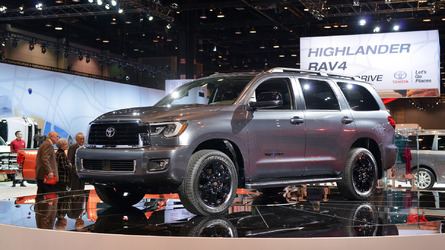 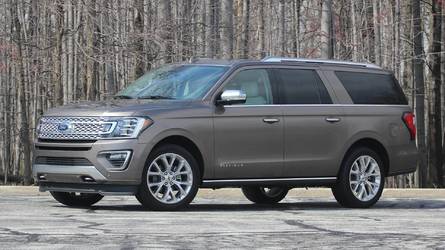 Toyota? It’s not doing much. The Japanese automaker refreshed its aging Sequoia earlier this year, showing its work at the Chicago Auto Show in February. But while the Tundra-based family hauler has some new bits, it’s still miles behind the competition (except in one very, very important area).

The 2018 Sequoia starts at $51,525 for the SR5 trim with four-wheel drive and a 5.7-liter V8 engine. There’s but one package – the $3,810 Premium Package, which adds leather upholstery for all eight seats, 10-way adjustability for the front passenger, heating for both front seats, a powered third-row (an impressively upscale feature for an entry level trim), navigation, and an auto-dimming rearview mirror. All told– including a $1,295 destination charge–our test model rang up at $56,965.

The Sequoia’s base price is certainly attractive – it easily undercuts the starting price for four-wheel-drive Ford Expedition ($54,800), failing to beat only the Nissan Armada ($48,990) while ringing up as negligibly more expensive than the $51,395 Chevrolet Tahoe. That said, the Expedition ekes back some points with a standard power-folding third row, while the Armada impresses with standard heated front chairs, LED headlights, and navigation.

It’s also worth noting that the Expedition allows far more latitude with options, offering up a host of available features for the Expedition’s base trim that includes heated and ventilated front seats, a heated steering wheel, push-button start, and a panoramic sunroof. This increased customizability may be worth it for customers that are particularly picky about their vehicle’s content.

The Toyota Sequoia’s refresh earlier this year was a light one, with new headlights and taillights, an updated front fascia, and other small cosmetic changes – the overall gist of this SUV in 2018 isn’t much different than when it debuted in 2008.

Unsurprisingly then, the Sequoia’s style is distinctly last decade. Remember how men in the late 2000s wore baggy everything, but clothes today are much slimmer and better fitted? The same thing has happened with cars, as soft, bulbous shapes have given way to sharper, more muscular sheet metal. Clearly no one told the Sequoia.

Compared to an Expedition, it’s pudgy and fat. Toyota has adopted more aggressive, tailored designs for its other models – see the Camry and Avalon – so let’s hope the next-gen Sequoia gets with the times.

As expected, the Sequoia is enormous inside. There’s 18.9 cubic feet of space with the third row up, more than the Tahoe and Armada, and only slightly less than the 19.3 cubes available in the Expedition. The Toyota pushes its advantage with the third row flat, offering up 66.6 cubes to the Tahoe’s 51.7, the Armada’s 49.9, and the Expedition’s 57.5. That said, it’s worth noting both the Chevy and Ford offer long-wheelbase models with cargo volumes that easily eclipse the one-size Sequoia.

The Sequoia finds itself neatly in the middle for third-row legroom, with 35.3 inches available, less than the Ford (36.1), but significantly more than the claustrophobic Nissan, which offers up a coupe-like 28.4 inches.

But the Sequoia doesn’t do well in more subjective measures. The cabin is largely a mess of plastics of differing qualities (but with typical Toyota solidity), and in our tester’s case, they’re almost all one single shade. It’s kind of depressing, actually.

The leather upholstery doesn’t feel especially nice or upscale, but the seats are quite comfortable for long stints at the wheel. The second row is a fine place to while away a road trip, as well, and if you have to climb in back, you’ll find the mechanism to release the second-row is easy to figure out.

The ride is, unsurprisingly, truck-like. The independent rear suspension can’t hide the Sequoia’s body-on-frame nature, as the shell shudders when faced with a particularly rough impact. On smother roads, this big Sequoia feels floaty and detached, lacking the more involved ride/handling character of a Ford Expedition. While each of its rivals is also based on a pickup truck, the Sequoia feels the closest to its three-box cousin in the way it goes down the road.

A last-generation infotainment system that wasn’t very good or very smart when it first debuted is at the center of the Sequoia’s tech suite.

The tiny screen – a meager 6.1 inches in size – is dim and its graphics grainy. Going from a modern infotainment system to this is like trading in an iPhone X for an old Nokia candy-bar phone. The screen is reasonably responsive, but because it’s small and the Sequoia’s cabin is the size of a county in Rhode Island – even drivers with long arms will have trouble reaching it. What’s truly befuddling is that even the manual controls for the infotainment are tiny. There’s 150 square miles of dash in here, why is the volume knob the size of a grape?

Apple CarPlay and Android Auto aren’t available, probably because the iPhone had just come out when this generation of Sequoia debuted. There is some tech integration, though, with standard Bluetooth connectivity and a few apps are available in the infotainment system via USB connection.

Like the Tundra, the Sequoia’s only engine is a 5.7-liter V8. There’s 381 horsepower and 401 pound-feet of torque, so at the very least the Sequoia can get out of its own way. It sounds fine, too, with a smooth note and at an appropriate volume from behind the wheel. And while the six-speed automatic feels ancient, it goes about its business of shifting gears without bothering the driver too much.

The result is impressive towing stats. Our tester can manage 7,100 pounds, although dropping the four-wheel-drive system kicks that figure up to a 7,400-pound max. That’s significantly less than an Expedition or Tahoe, but we’ll forgive the Sequoia. At the time it debuted, those kinds of towing figures were perfectly acceptable.

The ride is boat-like, which makes sense considering the Sequoia’s body-on-frame design, impetus on comfort, and the fact that this SUV weighs nearly 6,000 pounds for a four-wheel-drive example. The steering is a little bit more direct than a boat, but only just – feedback from the wheel is nonexistent and there’s a rubbery quality while turning it that American SUVs dialed out years ago.

These are all features that, if they offer it at all, Chevy and Ford are locking up in option packages. Getting adaptive cruise and automatic emergency braking on adds $6,320 to the price of a base Expedition. Chevy is more reasonable, requiring $695 on a base Tahoe to get forward collision warning and automatic emergency braking – adaptive cruise control isn’t available on any trim.

The Sequoia has its problems, but the availability of safety gear certainly isn’t one of them.

So why not a better score? The main things working against the Sequoia are its lack of cameras – the only one on the Sequoia is at the rear. It’s also missing high-end safety tech like lane-keeping assist and steering assist.

This shouldn’t shock anyone. The Sequoia with four-wheel drive returns 13 miles per gallon city, 17 mpg highway, and 14 combined. It is satisfied with regular fuel, though.

For comparison, both the Expedition and Tahoe (with the bigger 6.2-liter V8) earn EPA-estimated highway ratings north of 20 mpg. The Ford with four-wheel drive gets 17 city, 22 highway, and 19 combined, while the 6.2-liter Chevy packs 14 city and 22 highway. It’s worth mentioning that both of these trucks feature stop-start technology and advanced 10-speed automatic transmissions to the Sequoia’s six-speed auto.