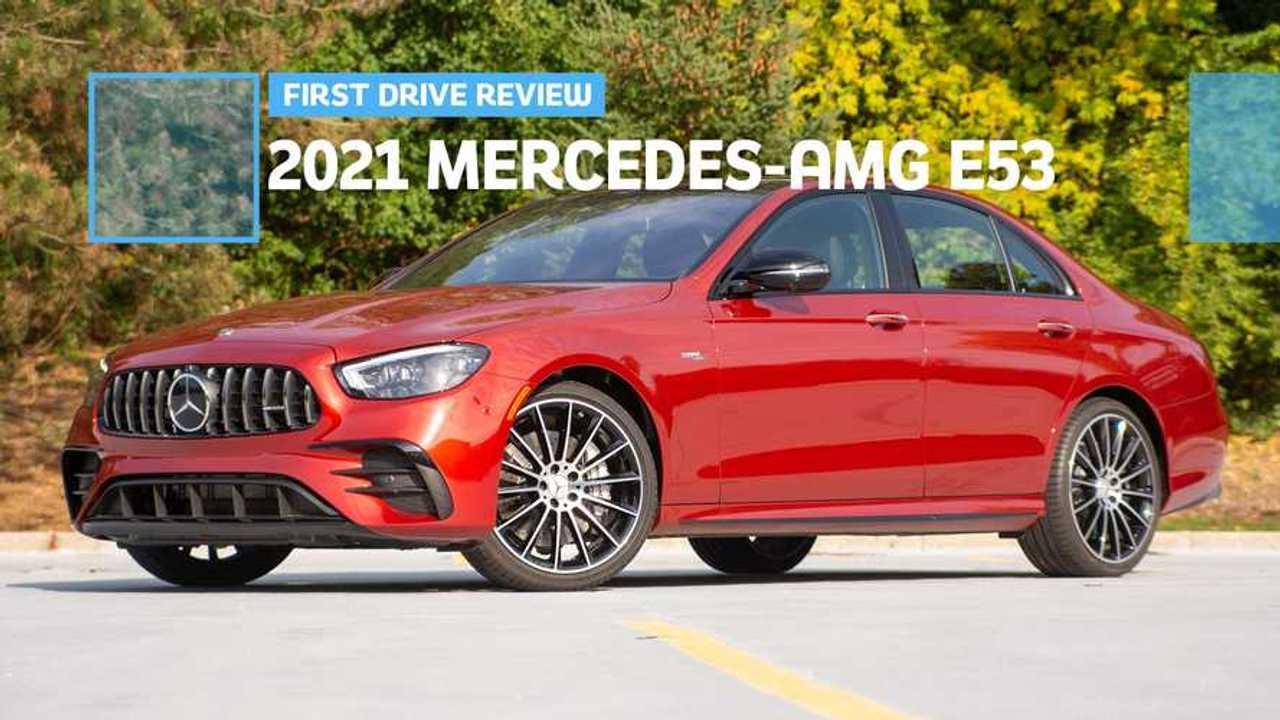 A six-cylinder, mild-hybrid AMG might just be the best of the bunch.

Over the past decade, Mercedes-Benz has developed its AMG line from a collective of V8- and V12-powered monsters to a diverse grouping that covers a range of power points. Today, Mercedes almost always partners top-flight AMGs with more accessible models that provide all the style and most of the performance without sacrificing any real comfort.

And while it's an auto-journalist cliché to prefer the less-powerful cars, who cares? From the A35 – the best value in the entire Mercedes line – to the king of the middle children, the GT53 4-Door, Mercedes has nailed its mid-range AMG line. That's most clear in the 2021 Mercedes-AMG E53 sedan, a four-door that's as fun as the fire-breathing E63 and as comfortable and stylish as the luxury sedan that serves as its base.

The 2021 E53 receives the same changes as the broader E-Class lineup. There's a new front clip with revised headlights, a changed fascia, and a new grille design. We like the look – it gives the E-Class a cleaner, more premium face. But changes at the back, namely the new two-piece LED taillights, are less successful.

The way the units angle up and narrow as they approach the vehicle's midline give the back of the E53 a puckered look. The general design works on a small car – these units bear a strong resemblance to the A-Class – but is less attractive on a larger vehicle. Mercedes changed the bumper and the diffuser, but the effect is less dramatic than the new lamps.

I'm struggling to come to grips with the E-Class range's new steering wheel, which controls the latest MBUX infotainment suite.

A little aesthetic failing is tolerable, but I'm struggling to come to grips with the E-Class range's new steering wheel, which controls the latest MBUX infotainment suite (the old E-Class had elements of MBUX, but this is the real McCoy). The wheel looks nice, especially in flat-bottomed AMG Performance guise and MBUX is one of the industry's best systems, but the new touch-capacitive interfaces feel like a change for the sake of change.

Virtually every new Mercedes has a pair of pads on the steering wheel – the left controls the digital instrument cluster, while the right manages the touchscreen infotainment system – but the E-Class is the first Mercedes to feature a revised design for these pads. At the same time, touch-capacitive interfaces replace all the physical buttons and scrollers from last year, too. The result is a cleaner, more modern steering wheel design that comes at the expense of usability.

The cleaner, more modern steering wheel design comes at the expense of usability.

The redesigned directional pads are too small and inaccurate and, because they exist at a weird angle, tend to accept horizontal swipes as vertical ones and vice versa. I repeatedly ran into issues trying to make simple changes to the gauge layout or adjust a radio station. Compound this with the new touch-capacitive volume slider on the steering wheel, and it's hard to understand just what Mercedes was thinking with this move.

Mercedes left the E53's mechanicals and the rest of its cabin alone, thank Gottlieb. The cabin remains beautifully appointed, spoiled with soft leather, real metal accents, and in my tester's case, carbon-fiber trim. Bank-vault solidity is the norm in this near-perfect interior. The seats are comfortable and offer an impressive range of adjustability and support, especially with the available Active Multicontour chairs, which inflate the bolsters in corners. If you want a sportier look, though, the E53 may disappoint – there is no AMG-branded seat option, as on the E63.

Under the E53's long hood remains a peach of a powertrain. The turbocharged 3.0-liter straight-six works alongside Mercedes' EQ Boost mild-hybrid technology to produce a total of 429 horsepower and 384 pound-feet of torque. The sprint to 60 miles per hour takes 4.4 seconds, although it feels a bit quicker than that. If pace is your main concern, the similarly priced, V8-powered BMW M550i takes 3.6 seconds to hit 60.

Mercedes left the E53's mechanicals and the rest of its cabin alone, thank Gottlieb.

That said, and as much as we like BMW's twin-turbo 4.4-liter V8, that car feels like a watered-down M5 (no bad thing). The E53's driving character and personality, though, are all its own. That starts with how this car sounds. While I adore the E63’s hand-built 4.0-liter V8, this mass-produced six-cylinder sounds sweeter and sweeter as it climbs the rev range.

Paired with the available sport exhaust, it's hard to avoid blasting from a standstill on up to the 6,500-rpm redline, cracking off an upshift via the neat E-shaped paddle shifters, and carrying on down the road. If you never understood why people love straight-six engines, the E53 will educate you.

This is a quick car. Power delivery is immediate, thanks to the EQ Boost system force-feeding the turbocharger before the exhaust gas takes over, and there's little break in acceleration as the digital tach needle climbs. But more impressive is how accessible the power is – yes, torque is never far away, but the E53 isn't so electrifyingly fast that it feels frantic. The E53 feels playful, encouraging its driver to wind the engine out at times when the E63’s added power might be inappropriate. Paired with a torque-converter nine-speed automatic transmission that snaps off gear changes like a dual-clutch, the E53 is a hoot to accelerate in.

Along with the mild-hybrid engine, the E53 benefits from standard torque-vectoring all-wheel drive, a sport-tuned air suspension, and (in my tester's case) sticky summer rubber. You won't out-handle an E63 – it benefits from a standard limited-slip differential to better put the power down while exiting corners and a dedicated Drift driving mode – but the E53 still features sharp reflexes and an eager cornering character.

Yes, torque is never far away, but the E53 isn't so electrifyingly fast that it feels frantic.

It's a hoot to push around, with tight body motions and an electric power-assisted steering rack that's weighty and surprisingly talkative. That said, neither E53 nor E63 feature newer handling technology like active anti-roll bars or four-wheel steering, which you'll find in rivals like the Porsche Panamera.

Break Out The Piggy Bank

Some of that price increase is worthwhile. The $1,250 sport exhaust is a must-have, as are the $1,320 multi-contour front seats and the $1,950 Driver Assistance pack (that's where all the active safety gear hides). In the sure-why-not category, we have a $4,550 Burmester audio system, this tester's $950 20-inch wheels, and the $900 Exterior Lighting pack.

This, of course, is an AMG-badged Mercedes and the price reflects that fact.

Beyond those things, though, most of the optional extras are of the aesthetic variety (the $750 AMG Night pack or the $2,850 carbon-fiber trim) or are unnecessary luxury items, like the $840 Warmth And Comfort pack – heated armrests are nice, but not that nice. And the $1,080 Designo Cardinal Red paint is an eye-catching, but unnecessary, choice. All of this to say that you can find a well-equipped E53 for $80,000.

That's an important point when you consider base prices of both the E63 ($107,500) and the non-AMG E450 ($62,000), too. The E53 is pricey, but it exists in a sweet spot for the E-Class range, offering more than its non-AMG sibling without going quite as far as its big brother. See, being a middle child isn't that bad. 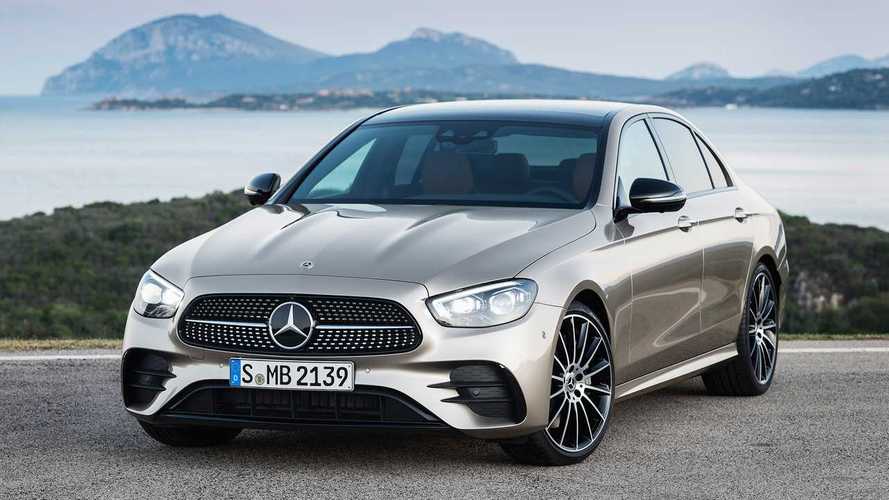