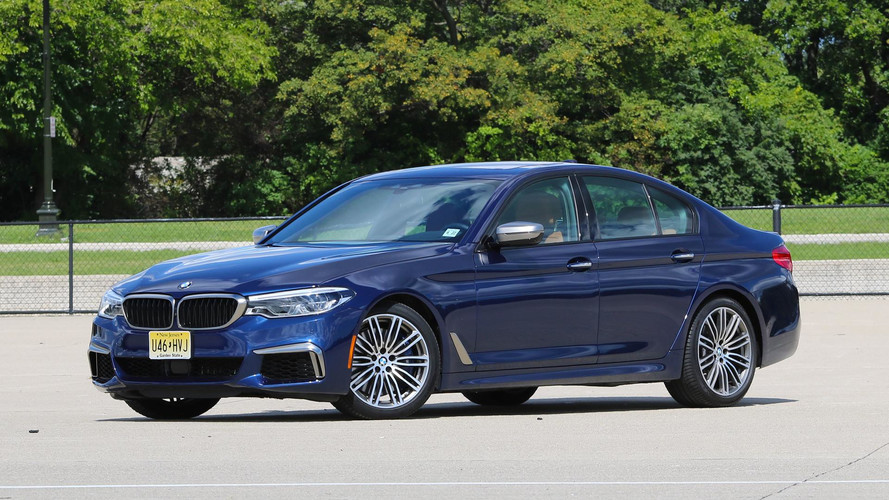 This might be as much fast 5 Series as you really need.

Don’t get me wrong, I’m sure the new M5 will be absolutely astonishing once we finally get a chance to slip behind the wheel. Yet having spent two long stints at the helm of the BMW M550i, both in California and the Midwest, I can’t help but argue this is about as much “fast” as most people need in their 5 Series. I know, I know, I’m being a killjoy – trust me, I still am itching to get a crack at that 600-horsepower M5. The truth is, though, that the M550i is tremendously capable and already delivers more performance than can be sensibly exercised on public roads.

Oh, it’s fast. Yes, it’s quicker to 60 mph from a stop than the old M5 (by as much as half a second, depending on transmission), but that really doesn’t tell the whole story about this car’s acceleration. The biturbocharged V8 has a cavernous reserve of torque, and it’s all dished up near instantly thanks to the twin-scroll turbos’ quick wake-up times and the promptness with which the automatic transmission downshifts. It’s the sort of car that makes one go, “Wait, how fast?” Never do I ever wonder if I’ve got enough oomph to blitz past a slower motorist or beat other cars down an on-ramp. Just point, accelerate, and get there.

Can still play the part of a cruiser. On a long highway journey with American speed limits, rather than Autobahn ones, one may as well settle in and relax. The M550i does this superbly, offering up a composed ride over broken pavement while fending off wind noise. In other words, when you’re not driving it like you stole it, the M550i is no less pleasant than the 530i and 540i. Use the Eco Pro driving mode and the adaptive cruise control, and it will even coast in neutral down hills or when slowing for traffic to eke out every possible bit of fuel efficiency. May as well save that gas for your next blast away from a toll booth, after all.

You’ll never unstick it. Man, there’s a lot of grip here, and not only because all four wheels are driven. The M Adaptive suspension, upgraded M Sport brakes, and wide rubber (245/40R19 fronts, 275/35R19 rears) are more than up to the task of keeping the M550i pointed where you want. If you get it out of sorts on the road, well, it’s your fault. In every other situation, this car just unflinchingly devours twists and turns.

But where’s the excitement? Like so many of BMW’s recent performance cars, the M550i provides tons of speed but only ounces of excitement. There’s a serious sense of disconnection from the brakes, the engine, and the steering gear; it’s as if every control has a few too many rubber bushings isolating me from the experience. I struggle to feel really at one with this car, no matter how eagerly I thrash it or which of the many driving modes I select.

Don’t bother with gesture controls. I have yet to think of a reason why I’d remove my right hand from the steering wheel to change the radio volume or answer a phone call given that those functions are already at my fingertips on the wheel. Moreover, if you’ve got friends who gesticulate a lot riding shotgun, they’ll accidentally trigger the gesture controls all the time. I even accidentally cranked up the volume while lifting my coffee out of the cupholder. At risk of sounding like a luddite, this feels like a solution looking for a problem.

Behind the times on smartphone integration. There’s no Android Auto support on the infotainment system, and even Apple CarPlay connectivity is a $300 option. Now, BMW is far from the only automaker without those features – see our extensive list here – but it’s an annoying omission from a company that is otherwise so focused on packing more tech into its cars.